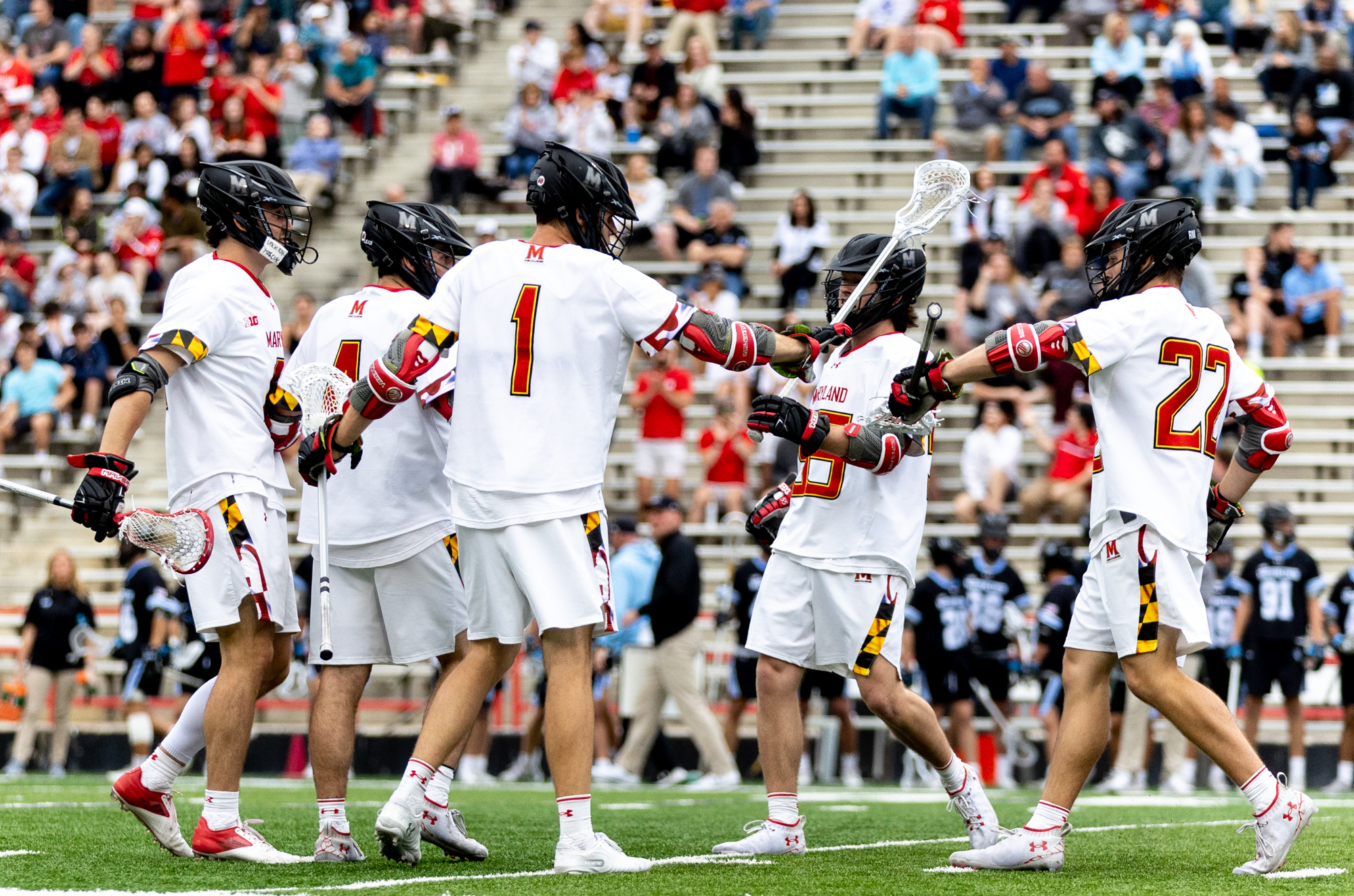 Logan Wisnauskas celebrates with Jack Koras after a goal during Maryland men's lacrosse's 16-11 win over Johns Hopkins on May 5, 2022. (Julia Nikhinson/The Diamondback)

Maryland men’s lacrosse finally regained the ball after a long Johns Hopkins possession before a rushed Bubba Fairman shot just nine seconds later turned the ball back over to the Blue Jays.

Jack Koras forced a save before another Murphy attempt went wide. The Terps struggled to get the ball into the center of the field until the waning seconds of the first quarter.

Wheeling around from behind the net, Logan Wisnauskas flipped a pass to Eric Malever right in front of goal. The sophomore received the ball and rose up over his defender, firing it into the ground before the ball bounced past Johns Hopkins goalkeeper Josh Kirson, ending a scoring drought lasting just under seven minutes.

Overcoming a frantic start, the Terps’ offense reaped the rewards of their patience, securing a place in the Big Ten tournament final with a 16-11 victory over the Blue Jays.

Maryland was unselfish with the ball, evidenced by Malever’s feed to Wisnauskas with just over a minute left in the second quarter. Malever rose up, ready to shoot, before finding the fifth-year senior open at the back post.

All Wisnauskas had to do was shovel the ball into an open net to extend the Terps’ lead before halftime.

“I think we did a better job as the game went on forgoing some of those and trying to get a little bit more towards the middle of the field,” Tillman said. “When we did I thought we had more success.”

The Terps calmed down after the opening quarter. Maryland created quality scoring opportunities, converting on the first shot of seven straight scoring possessions throughout the second and third frames.

Tillman’s squad was also quick to shoot throughout the match, notching its third-lowest average time to first shot of the season at 31.8 seconds, according to Lacrosse Reference.

The only times that Maryland has averaged a quicker time to first shot this year was in its games against Notre Dame and Ohio State, arguably two of its most challenging matchups of the regular season.

“I think we settled for some shots … where the odds are really against you,” Tillman said.

The Terps restrained themselves from shooting too quickly as the game went on. Wisnauskas turned provider for Malever in the third quarter, finding the sophomore as he cut across the net.

Malever received the ball and took a few steps to create space before finding the bottom corner, extending a clinical Maryland’s lead to five as the Terps rode out a comprehensive victory over their in-state rivals.