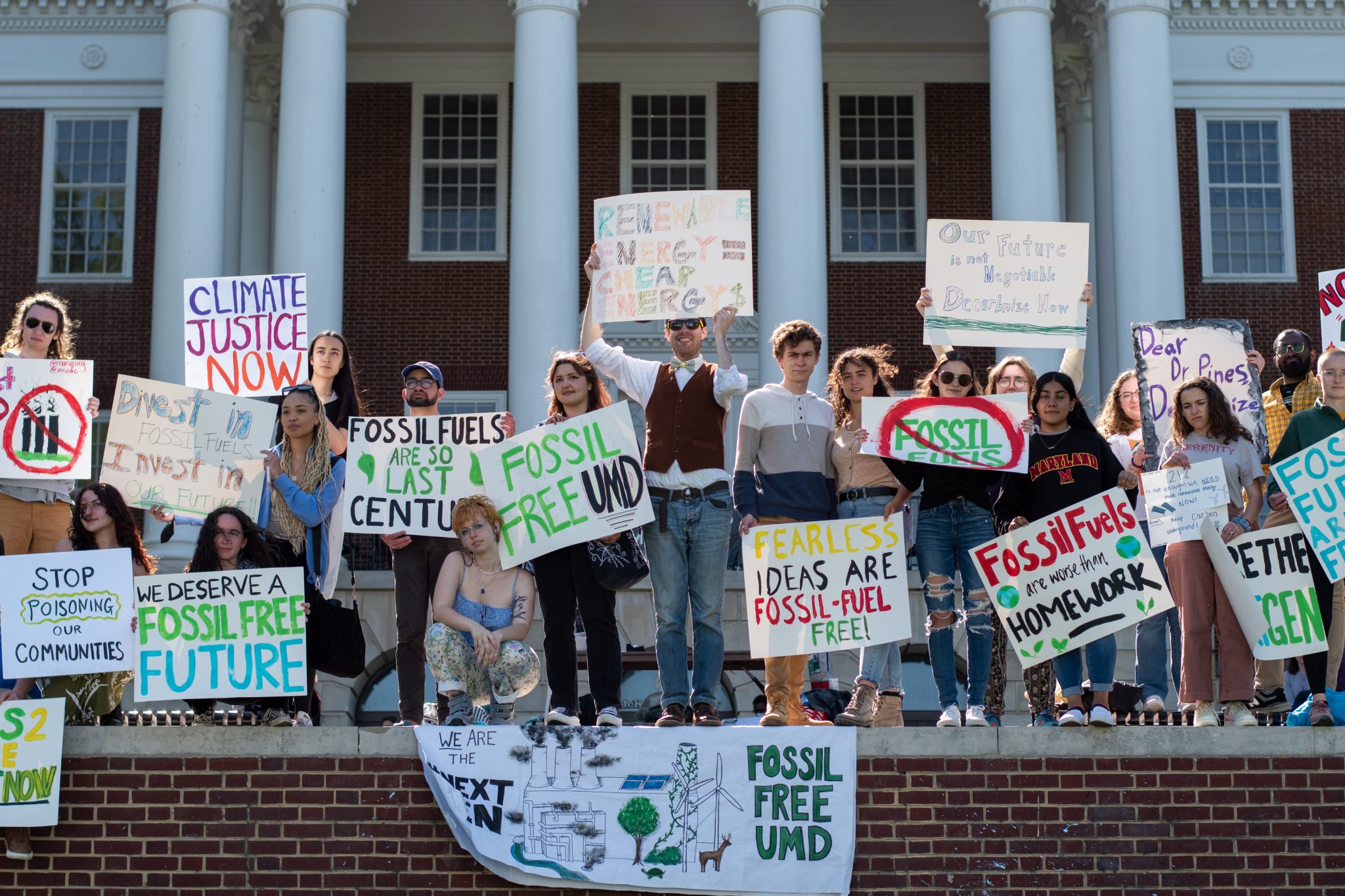 Students hold their posters calling for the University of Maryland to become fossil free during the fossil free rally on April 29, 2022. (Autumn Hengen/The Diamondback)

Student climate activists at the University of Maryland gathered Friday on McKeldin Mall to push for more transparency and progress from this university in decarbonizing its energy sources.

As students and faculty members passed by McKeldin Library throughout the afternoon, activists pointed down the mall to three gray smokestacks at the fossil fuel power plant where this university has derived natural gas energy from for years, making it the largest source of carbon emissions in the state government. The plant’s current natural gas system was installed in 1999.

“So many people today have been so surprised that you can see the power plant and that it’s on the main road right there because we don’t have conversations about it,” junior animal sciences major Betsy Barrett said.

This university’s Student Government Association hosted the Fossil Free UMD rally to bring transparency to the university’s NextGen Energy Project — an initiative started in 2020 to renew the university’s contract with the Route 1 power plant and make it more environmentally friendly.

The plan sets broad goals of adding a distribution system to make heating and cooling energy systems at this university more efficient. But throughout the process, many students have voiced concerns that there have not been enough student voices consulted.

“It’s important that students are considered in every decision-making process. And it currently is just not happening with the Next-Gen project,” SGA Speaker Pro Tempore Steven Berit said. “If the students are just there to check off a box saying students are there, then it’s not meaningful.”

Berit, a sophomore computer science and government and politics major, is the only undergraduate representative on this university’s NextGen Program Advisory Group, which was formed to consult with university officials on the project’s progress. So far, Berit and other SGA leaders say the group has had no meaningful impact on university negotiations to renew the power plant.

Students are pushing this university to go a step further and fully decarbonize, or reduce and remove all carbon emissions without offsets.

Friday’s rally was crucial because the university is at a turning point for its energy needs for the next several decades, said Nina Jeffries, the sustainability director for SGA. As the university looks to make its energy consumption more sustainable, students need to be more aware of how it impacts climate change in the state, she added.

“People think that climate change and using fossil fuels is so far away from home, but really, it’s right here, our campus runs on it,” the senior environmental science and policy major said. “We have an incredibly important moment that we have to capitalize on to make sure that we’re not continuing to power this campus with fossil fuels.”

Students attending the rally shared their personal experiences with climate change and made posters with statements such as “fearless ideas are fossil fuel free” and “we deserve a fossil free future.”

“We need to do events like this and really increase awareness, because it’s kind of ridiculous that our university is continuing to invest in fossil fuels,” said Sophia D’Alonzo, a sophomore communication and environmental science and policy major who attended the rally.

Other students said the university’s emphasis on sustainability in its curriculum and admissions outreach is hypocritical if it does not expedite its decarbonization processes.

Through the NextGen Energy Program, this university is accepting proposals that would set it on a timeline for full decarbonization by 2035 or 2050. Students at the rally emphasized that the university’s consideration of a timeline that decarbonizes its energy by 2050 does not fall in line with its sustainability goals.

“[The university is] eventually going to move to renewable energy. I just don’t see what the holdup is, especially when it’s our generation that is going to be dealing with this kind of stuff,” Betsy Barrett said.

In a statement, this university said it is fully committed to becoming fossil fuel-free under the NextGen Energy program and committed to “achieving decarbonization for the future of our entire campus community,” with a goal of achieving carbon neutrality by 2025.

“Students are rallying for something that the institution is fully committed to,” university spokesperson Hafsa Siddiqi said in an email.

But for junior environmental science and policy major and SGA deputy sustainability director Nancy Barrett, the university’s current efforts at promoting sustainability are not enough. That’s why students had to take matters into their own hands this week, she said.

“I commend this university for what they have done but in the era of climate change, we are still not doing enough,” they said. “We know how significant the climate crisis is. It’s looming right in front of us … we are in crisis mode.”