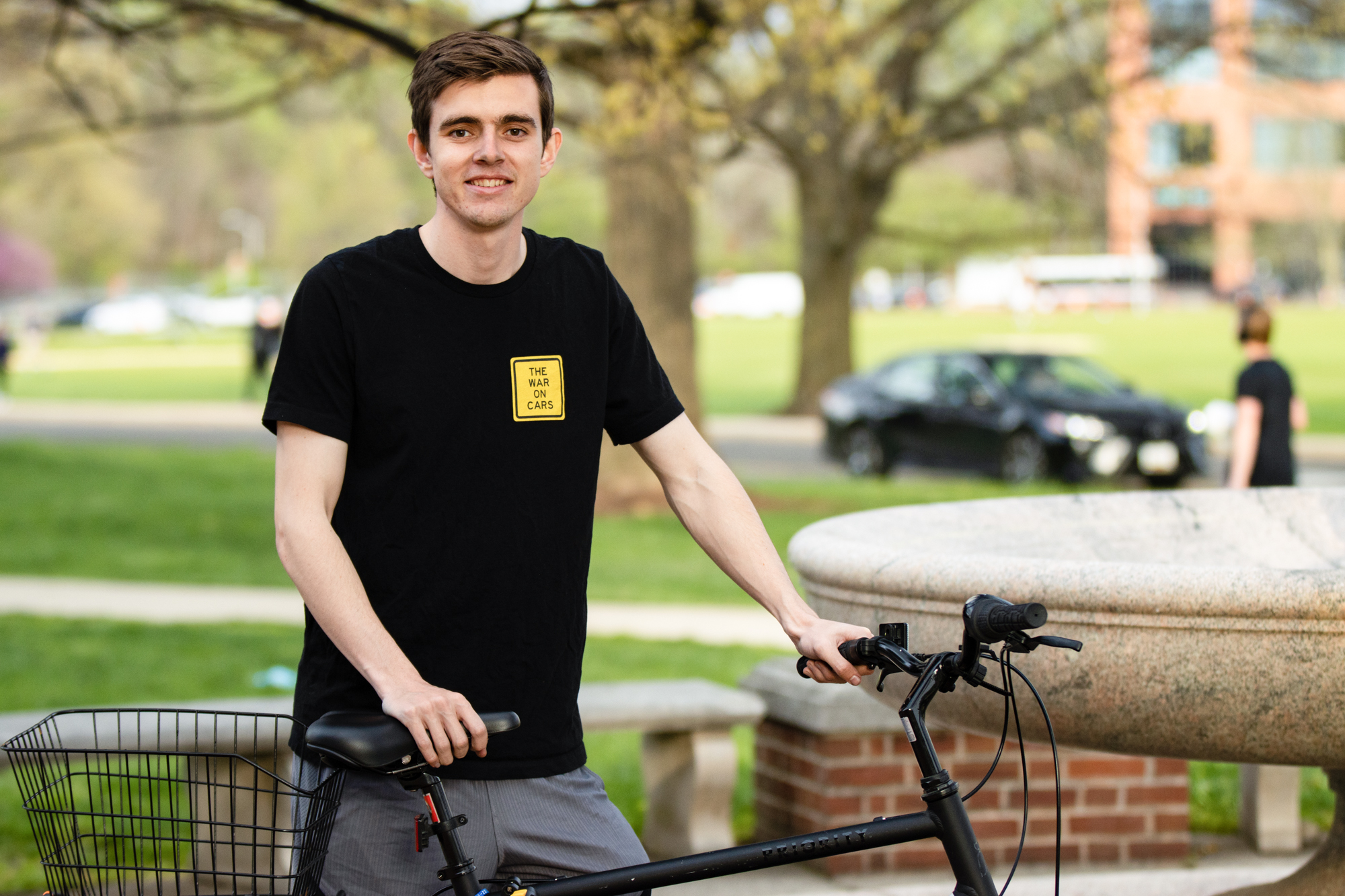 When Nicole Mogul, who lives in Washington, D.C.’s Capitol Hill neighborhood, first started her job at the University of Maryland, she was eagerly waiting for construction on the Anacostia River Trail to finish. When it did, it provided almost a straight shot from her house to this university’s campus — something Mogul has taken advantage of by biking to work since.

“I really like the way it makes me feel. I like the way I arrive on campus with a better attitude,” Mogul said. “And I really dislike the feeling that I’m using fossil fuels for getting me to my work.”

For Mogul, a senior lecturer in this university’s engineering school, the motivation to start biking was sparked simply by the ability to do so — and a desire to live more sustainably. She’s part of a growing number of people, which includes members of the university community, who are opting to bike to school or work.

Biking instead of driving can decrease household emissions by up to 6 percent. Bikes also produce no pollution, whereas cars can create 0.97 pounds of pollution per mile annually.

Nick Webb, a senior civil engineering major, started biking because it was more convenient for him than taking a crowded Shuttle-UM bus or walking from his apartment to class. Seeing the environmental benefits of biking pushed him to keep using his bike as much as possible in College Park.

“The environmental benefits are sort of why I challenged myself to go car free,” Webb said. “A lot of our transportation is just moving people around one at a time in 2000 pound to 4000 pound boxes of steel and glass.”

Thomas says biking brings him to campus twice as fast as driving would, and that he likes the exercise.

Thomas says biking  to work is a sustainable choice. More people biking or scootering to campus means more open parking spaces. He hopes more community members forgoing driving for biking means that as these spaces free up, the university can use the the lots to develop housing and other needed amenities,  instead of resorting to developing Guilford Woods and the Wooded Hillock — forested areas on campus that have been the subject of much controversy.

“Everyday I [bike] is an extra parking spot that someone else can have,” Thomas said. “I sometimes think, you know, if there was more bike infrastructure … we could instead replace the current parking lots with the graduate housing or whatever needs are necessary for the campus.”

To Thomas, living sustainably is not independent of safety. Making the decision to bike often is not easy because of the many barriers to safety and convenience that exist, he said.

Webb said the lack of bike-friendly infrastructure in and around College Park has shown him that sustainable living is not often about individual action, but about creating the systems necessary to make climate-friendly choices.

“​​It’s like, ‘you should bike to work,’ you know, but if we don’t make our society so that you can do these things safely and conveniently, then you’re sort of not enabling people to do that,” Webb said.

For him, creating a society that allows for sustainable choices like biking means prioritizing safety, from more bike lanes around campus to adequate bike parking in front of businesses.

Chester Harvey, director of the Transportation Policy Research Group at the National Center for Smart Growth — a university initiative focused on sustainable development — says the key to safety and sustainability lies in generally accommodating infrastructure, outside of just bike lanes.

“My personal preference as a planner and designer actually tends more toward designing streets that are really kind of low speed and low volume, so that you don’t need a bike lane, but it’s just a safe and comfortable place for folks to share with different modes [of transportation],” Harvey said.

Harvey also mentioned the need to create places where biking and other forms of micromobility could reasonably replace driving — that means fostering affordable communities where commodities are accessible by bikes, scooters and the like.

“We have to create places that have those diverse transportation modes that people can move to if they want,” he said.

While the path to accessible sustainability takes shape, Webb said it’s important for people to keep incorporating sustainable choices like using micromobility into their everyday lives.

“If there aren’t some people who take individual actions, start pursuing things, people are going to be like, ‘Oh, we don’t need bike lanes,'” he said. “But we need to sort of show that we’re interested in this stuff in order to make things speed up and happen.”