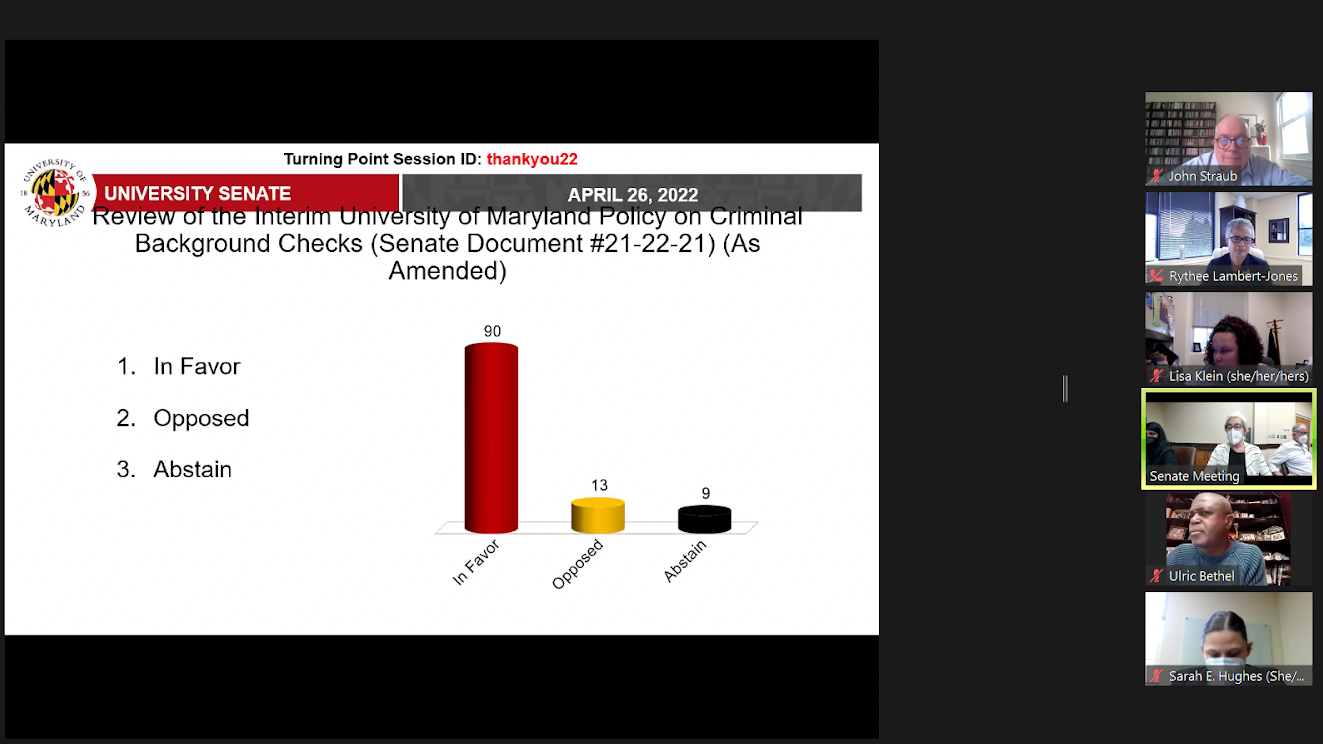 The University of Maryland University Senate approved amendments to the criminal background check policy during its Tuesday meeting. The measure passed with 90 votes in favor, 13 opposed and nine members abstaining.

The policy requires a criminal background check on all new staff and faculty hires, according to Staff Affairs Committee Chair and history department finance director Lisa Klein. Returning employees who spent more than 18 months away from the university are also subject to the checks, according to the senate proposal by the Faculty Affairs and Staff Affairs committees.

In April 2019, the two committees were tasked with considering whether to institute a new criminal background check on all new faculty and staff hires, according to the proposal.

“The committees recognized that the President and the administration felt strongly that this
was a necessary step for the University,” according to the proposal. “Minimizing liability and institutional risk … were likely strong motivators for the President.”

Both committees raised concerns that the policy would hinder the university’s ability to recruit a diverse faculty and staff, said Faculty Affairs Committee Chair William Reed.

The committees elaborated on the “chilling effect” the policy could have in the senate proposal, stating that qualified candidates may choose not to apply, and the policy could undercut their diversity, equity and inclusion goals.

The committees also put forth a revision that formalizes an existing practice, where hiring officials do not have access to the results of the background check to avoid bias in the hiring process.

The committees listed steps in the proposal to protect applicants from underrepresented communities. The guidelines were incorporated from the Equal Employment Opportunity Commission, according to the proposal.

One of the steps is an individual assessment of “adverse findings” that factored in “time since the offense, the nature and severity of the offense,” according to the proposal.

The committees noted the harm the background check could have on LGBTQ+ applicants and made a recommendation that candidates would not be required to provide their birth or legal name to the university.

The university entered a contract with HireRight, a company that does criminal background checks to conduct reviews.

HireRight can still ask for the candidate’s legal name, but if the company does, the applicant does not have to give their legal name to their direct supervisor, according to the document. The vendor will also ask for “other identifying information like Social Security numbers,” which are more reliable data points, the proposal read.

The proposal passed with an amendment proposed by M Pease, a senior psychology major and senator for the behavioral and social sciences college. Pease’s amendment added language to the end of the policy that explicitly recognizes “systemic oppression and criminalization in the legal system that affect marginalized communities.”

“It doesn’t request anything of explicit training or other actions done by administration,” Pease said. “It simply articulates a value that I believe is shared by the committee and by the senators.”