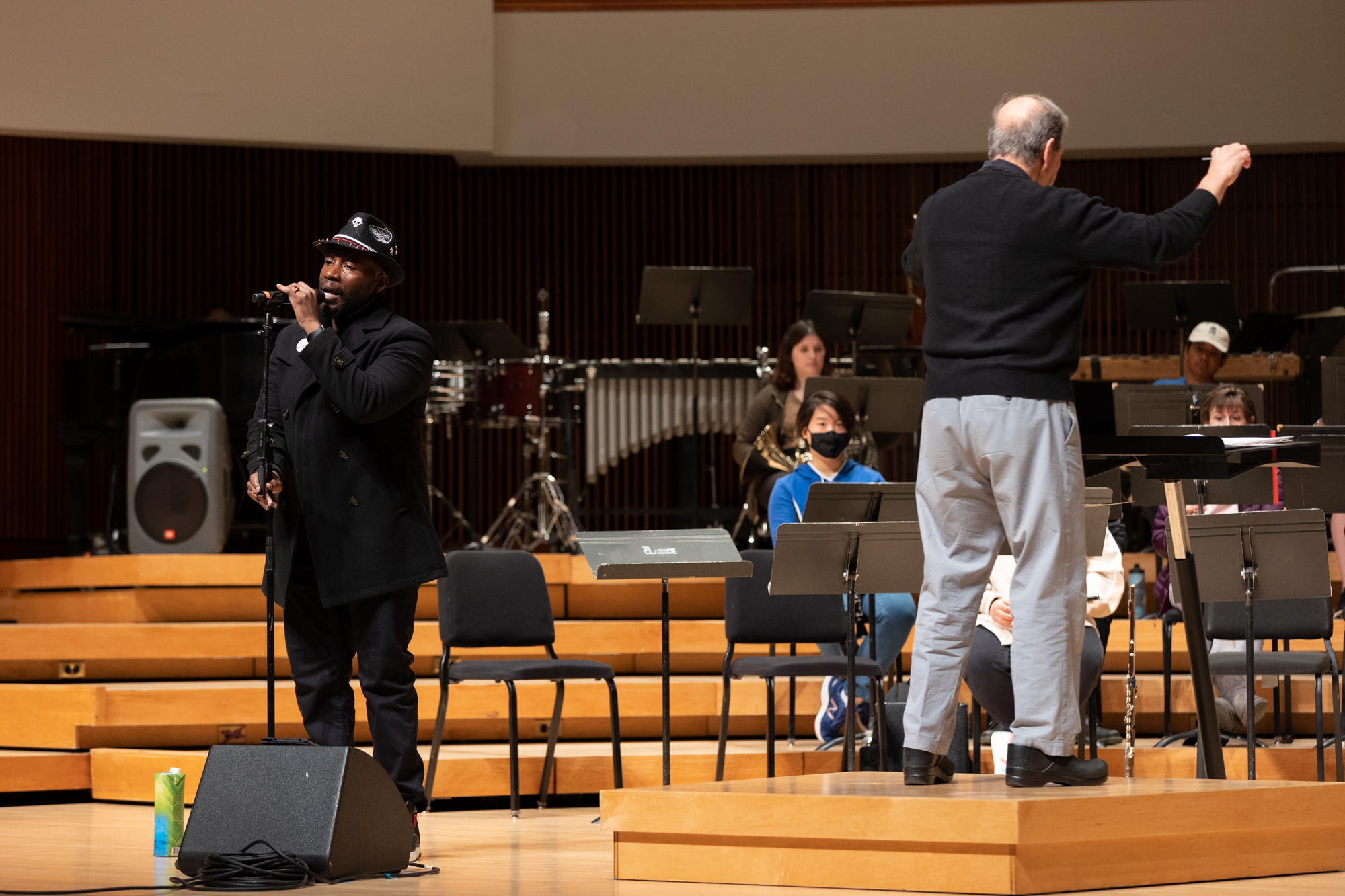 This past April, there was a rehearsal inside Dekelboum Concert Hall, and the members of the University of Maryland wind orchestra stood up, leaving their traditional seated set-up behind. Some of the student musicians made ear-splitting screams while others stomped their feet. And musical improvisation on instruments happened, too. Nothing seemed planned, and no one seemed to be following anyone else. It was organized chaos.

It was hard to tell when the musicians started and stopped: They played without a conductor, improvising as if every individual musician was a soloist. Meanwhile, I took a chair in the back of the auditorium, unsure if I was allowed to view this seemingly sacred practice. The unusual nature of the rehearsal made it seem personal. For the first time, I was more nervous to be sitting in the audience than I ever would be on stage. My cheeks were hot. I was unsure how to receive this experience.

The truth is that I was witnessing original and creative thoughts, feelings and gestures from student musicians who had been given the opportunity to express themselves through the music of Julius Eastman, a Black composer who died young and left a complicated legacy.

The wind orchestra had been rehearsing Eastman’s “Stay On It,” a minimalist composition that encourages theatrical and performance-based improvisation, but requires intense and strict concentration. It’s an advanced discipline to master, but the wind orchestra will take on this challenge come May 7 in Dekelboum Concert Hall.

“I was kind of scared to death of this whole thing,” said Dr. Michael Votta, director of bands and the wind orchestra for the university. “I’ve improvised before. I’ve never taught an entire wind orchestra full of people — most of whom have never really done much improvisation — to try to do any kind of improvising … It’s finding a way to kind of give them permission and empower them.” During this rehearsal, Votta even walked around on stage to improvise with his students.

Derek Maseloff, a music alum from this university and composer whose work is on this program, shared that classically trained musicians often struggle with improvisation. Sheet music allows a musician to express themselves, and even then they’re expressing the composer’s ideas.

“That sort of intense training and intense knowledge is a straightjacket. We are extremely, extremely bound to what is happening on the page in front of us,” Maseloff said.

Working with their primary collaborator, Konshens — pronounced “conscience” — The MC, has been a challenge in the rehearsal room, as the student musicians don’t read from the same “playbook” as the hip-hop artist.

Konshens, a Washington, D.C., native and rapper, will join the wind orchestra showcasing his Classically Dope project of combining classical music and hip-hop. He’ll stand on stage with the ensemble, reciting poems and other texts that reflect on the Black experience and a broken justice system. He’s an educator, artist and altruist.

Konshens’ influences are derived from his experiences growing up in Washington, D.C., particularly go-go music, a celebrated local genre. He eventually made his way to the clarinet, but never fully committed himself to classical music.

His introduction to this idea of fusing classical music with hip-hop and rap started with a woodwind quintet at this university in 2015, leading him to his EP, Classically Dope. But over time, he pushed the needle even further and entertained the involvement of a large ensemble — ranging from 40 to 50 people.

“I was a little surprised at how eager the musicians … were … just to do something different,” Konshens shared. Soon he was performing on ABC, CBS and even at the Kennedy Center.

“We’re all in this together … We’re all on stage in something, and we’ve got to make music together,” Votta added. “And here’s something that, hopefully … [inspires] dreams.”

Maseloff’s piece “Dreams” is first on the program, which opens with ethereal and cloudy chords that gently sit beneath a syncopated texture from double reeds, all to complement the therapeutic and cinematic text that Konshens recites: “Dream like it’s your last breath.”

The wind orchestra will also perform a composition by Joseph Schwanter, “…and the mountains rising nowhere.” It begins with a thoughtful reading of Carol Adler’s poem “Arioso” from Konshens and includes shimmering, delicate whistling from various musicians, gongs immersed in water and the playing of wine glasses filled with water, a non-traditional yet creative instrumentation.

“One of the goals behind Classically Dope is to bring [different] people … and put them in the same room and have them enjoy music for a moment,” Konshens said.

“I had the chance to meet Yo-Yo Ma one time,” Konshens added, after which Ma followed up their conversation with a letter. “In the letter, he was telling me to be a person who recognizes the importance of culture and how to connect different cultures … is the duty of an artist … to understand how culture connects all of us.”