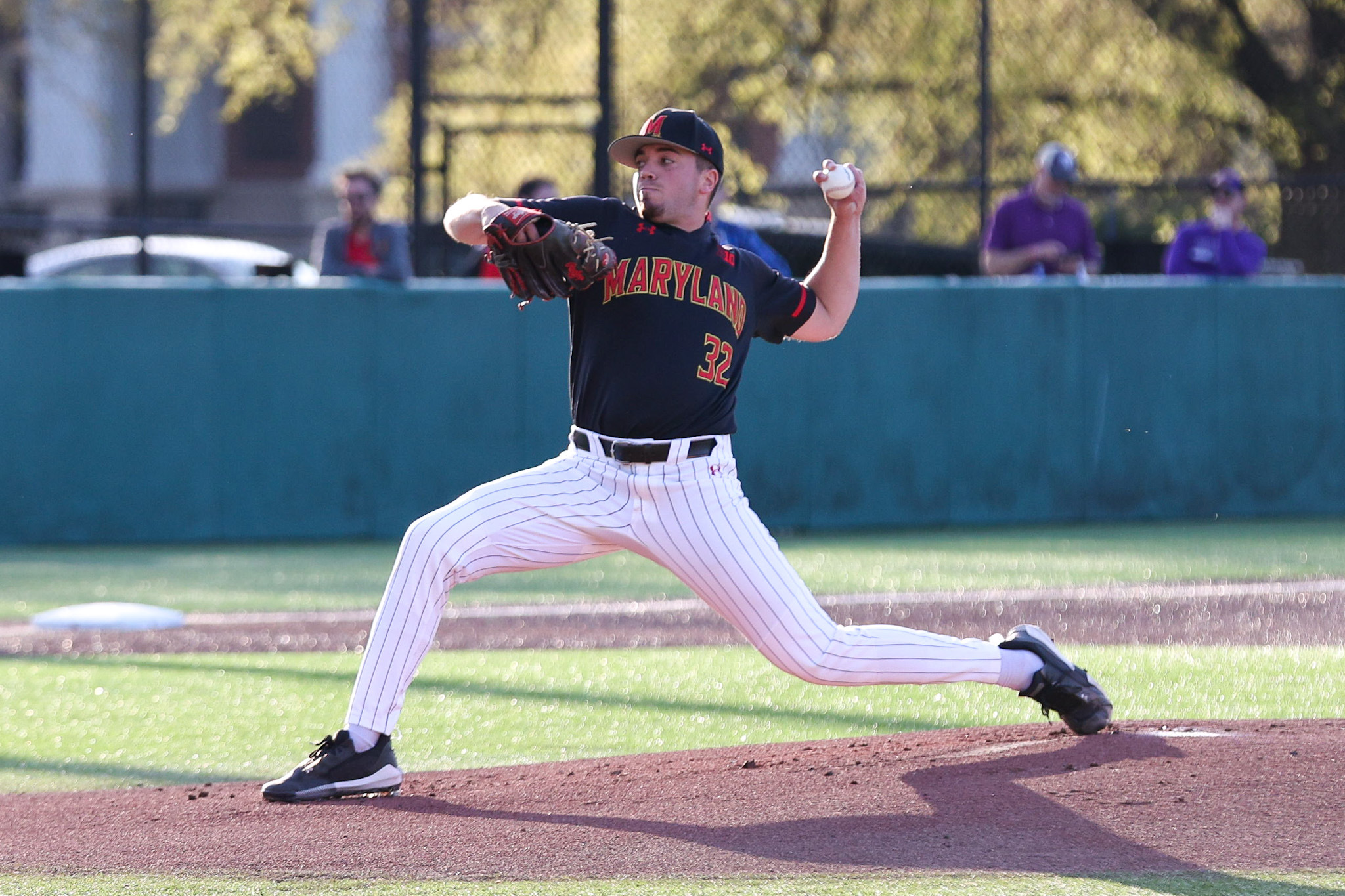 Ryan Ramsey played the game of his life.

The junior threw flawlessly through 8 2/3 innings, with his defense supporting him along the way.

None of his opening 117 pitches found the wrong mark. Ball or strike, foul or fair, every throw led up to his last.

“I definitely could sense it all around me,” Ramsey said. “The fans, our guys just staying quiet and doing our regular saying, ‘just go out and win the ballgame.’”

Ramsey grasped the ball, took a deep breath and delivered. He forced a soft grounder to third base, which Nick Lorusso zipped toward Max Costes.

Ramsey watched as the ball flew past him. It found its mark.

The crowd screamed, and Ramsey lifted his hands as his teammates stormed him. Catcher Luke Shliger hoisted the junior as the team witnessed a beyond-rare occasion.

Behind a thoroughly outstanding performance from the pitcher, Maryland baseball embarrassed Northwestern, 13-0.

Ramsey notched the Terps’ second-ever perfect game, a feat that had only been accomplished before by Dick Reitz in 1959.

“The first part of the season, I haven’t been able to command a lot of off-speed pitches and have everything together and feel the way I did tonight,” Ramsey said.

“Tonight was one of those nights and I just wanted to stay locked-in.”

Between the emotions of Maryland coach Rob Vaughn reuniting with Brad Hill — his former coach when he was a player at Kansas State — and Ramsey’s unique day, Maryland played with fire.

Ramsey replaced Nick Dean as the Terps’ usual Friday starting pitcher, and proved his worth immediately. The junior thoroughly outclassed Northwestern’s Sean Sullivan, who holds a top-10 ERA in the Big Ten, as the Wildcats pitcher struggled down the stretch.

Sullivan felt the wrath of an unforgiving Maryland batting lineup. Riding behind Ramsey’s arm, the Terps were able to get out to an early lead and continued to slug away.

“We were able to get after Sullivan a little bit early, which was big for us, but I knew we needed [Ramsey] to hold them at bay and give us a chance offensively,” Vaughn said.

After a Shliger strikeout, Chris Alleyne kicked the scoring off.

And as Maryland did early and often Friday, Alleyne left no doubt. The fifth-year senior torched a Sullivan pitch over the center-field wall, eliciting cheers before the ball even crossed.

Vaughn held no quarrel with his former coach, but Maryland played as if the Wildcats were its fiercest rival. Ramsey dealt with ease, and the Terps continued the shots in the second.

Max Costes and Bobby Zmarzlak cracked back-to-back solo slugs to bury Northwestern further as Sullivan continued to struggle. Alleyne dropped a base-hit later in the inning to give Maryland a four-run lead.

After yet another clean inning from Ramsey, the Terps put Sullivan to bed. A flurry of two-out hits handed the Wildcats’ starter his worst outing of the season and Maryland a solid lead.

“You look up and down the lineup, we did it a lot of different ways,” Vaughn said. “We hit a couple of homers but we were really good with two outs today.”

The Terps went up 9-0 at only the end of the third inning. Northwestern couldn’t find an answer on either side of the ball.

The Wildcats stifled Maryland for their first scoreless inning in the fourth, but with Ramsey continuing on an historic pace, it did nothing but delay the inevitable.

“[I threw] a lot of change-ups,” Ramsey said. “Mostly fastball, change-ups and been mixing in — been working the past week — with a slider, and used that a lot tonight against lefties.”

Nick Lorusso added a solo shot in the fifth to catalyze another rally on the day, eliminating any doubt as the Terps continued to put away the Wildcats.

“Tonight was our potential,” Vaughn said. “That’s about as good as we can be. Elite offense, elite defense, and an elite arm on the mound.”

Ramsey continued his key routine. The junior found his spot against batters, hammered it, and watched them stroll to the dugout, making pitching look easy.

The narrative shifted further to Ramsey. He had the stuff, but with a rising pitch count, it wasn’t known if he would be able to finish out the game.

“[Ramsey] pitched on Saturday, so he’s a day short rest-wise,” Vaughn said. “[Mike Morrison] and I were not acknowledging what was happening in the dugout. He looked over at me and said, ‘well, if something happens, should we go to [Will] Glock,’ and I was like ‘yes.’”

“There was no way I was going to get him on a night like tonight to rob him of that.”

As the outs stacked up, Maryland went quiet with superstition as the perfect game came closer and closer to fruition.

“[Ramsey] was sitting right next to me and I didn’t say a word to him,” Alleyne said.

“He was locked in and it was fun to see him in his zone.”

Ramsey hit roadblocks at times, but Maryland’s fielders made enough plays to keep him flawless through the eighth.

The stage was set for Ramsey. The junior delivered in the ninth inning as the Terps earned a memorable 34th win.

“That was probably the best feeling I’ve ever had on this field,” Alleyne, a fifth-year senior, said. “That was an awesome moment. I think for all of us [too], especially for Ramsey, awesome accolade for him. It’s awesome to be able to watch that.”