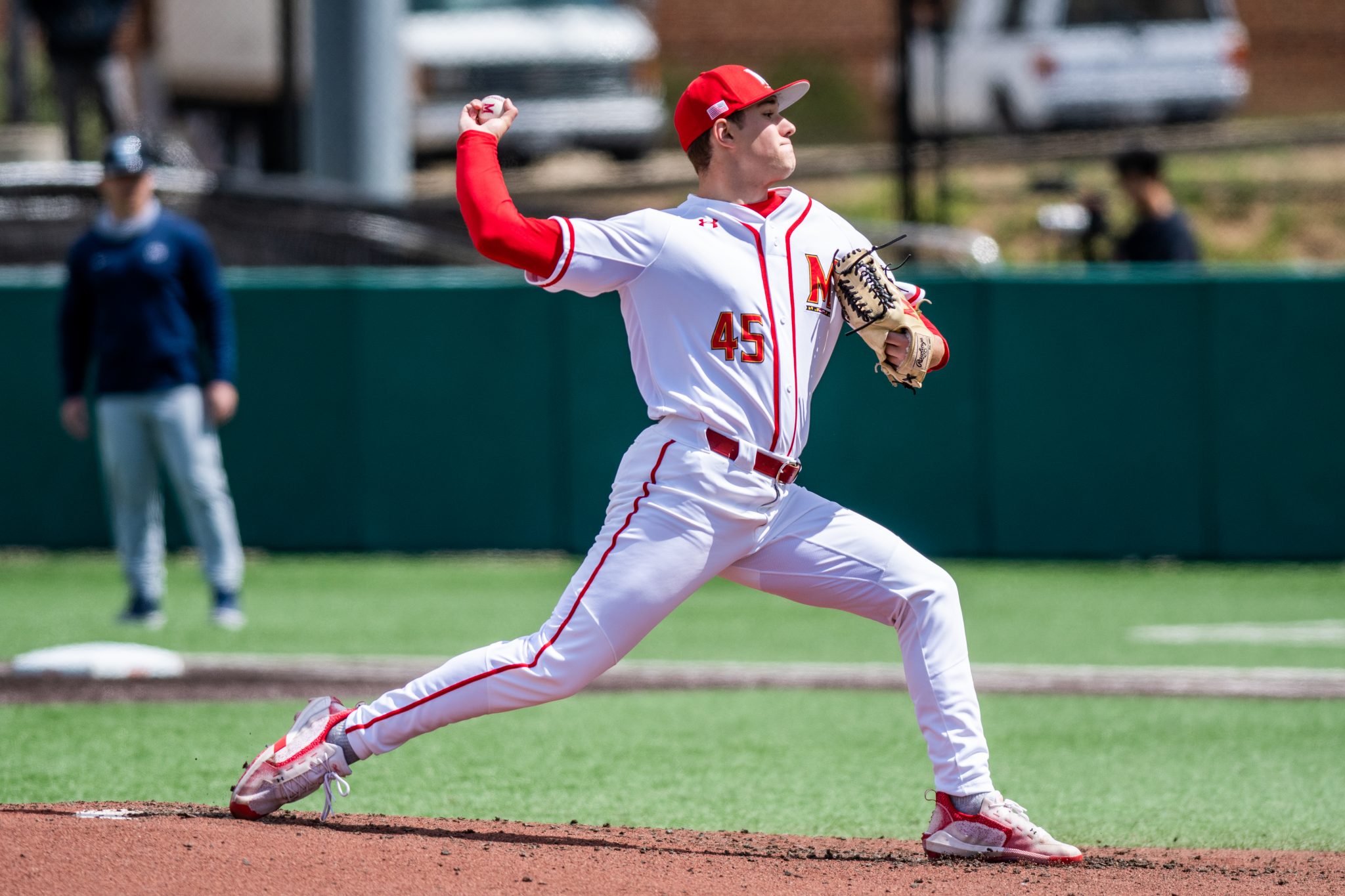 Not many teams could shake off a 19-1 loss. Maryland did, earning the Terps a series victory against Big Ten foe Illinois. More important than the win, Maryland’s lineup established a rugged resiliency.

“Let’s call a spade a spade,” Max Costes said. “We got beat by 18 runs on Friday, right? Most teams, you know, are gonna go come in the next day, and they’re gonna be downtrodden.”

Fueled by the floods of adversity, Maryland baseball’s offense blossomed. By only putting up one run against the Fighting Illini on Friday, the Terps have averaged more than 12 runs and more than 13 hits a game in an explosive rebuke over the following three games.

It wasn’t just Maryland’s blowout loss to the Illini either.

The next two series games saw the Terps battle through significant adversity. The Saturday afternoon game went into extra innings following a late rally by Illinois, and Saturday night’s game required a three-run comeback in the early going.

“They’re just tough kids,” coach Rob Vaughn said. “There’s not too many teams I’ve coached that number one, bounce back from a 19-1 drubbing on a Friday night to win the series and number two, that bounce back from having a three-run lead, giving it up on an error and then a two-out hit … [then] go answer with another four spot right there.”

It didn’t end against Navy on Tuesday either, as the Midshipmen clawed back from a seven-run deficit to challenge the Terps.

Many teams would be intimidated, but Maryland responded, rocketing four homers in its 18-10 romp of the Midshipmen — finishing off a series of challenging games for the Terps.

“That’s what the most dangerous offenses have is if all nine are clicking [on] the same day, I don’t have to do much,” Vaughn said. “We can just kind of  line up and play.”

As it showcased against Illinois on Friday, Maryland hasn’t quite gotten there yet. While its response to adversity has been nothing short of stellar — as the Terps showcased in their 11-5 win over Dallas Baptist after dropping a 8-3 opening-series loss – the Terps still need to work on defense.

“We still haven’t played awesome in all facets at all times, and we’re sitting here in a pretty good spot,” Vaughn said. “So it’s very exciting as we continue moving through [the regular season].”

Matt Shaw erred two crucial times in the past few games — late in their 13-9 extra-innings win to add crucial runs for Illinois and early against Navy to allow them to put up an early score.

Maryland’s relievers, and starters at times, have underperformed in the Terps’ past few outings. Maryland’s relievers have especially struggled in midweek games such as Tuesday’s against Navy and its extra-innings win on April 19 against Towson.

In both matchups, the Terps bullpen gave up runs at inopportune times — late against Towson to send the game to extra innings and throughout Tuesday’s game against Navy, as Maryland’s offense had to explode to finish the Midshipmen off.

The one undoubtable bright spot on defense has been Jason Savacool.

Savacool has 36 K’s in his last four outings and leads the conference in innings pitched and strikeouts, while ranking third in ERA. He’s the latest to step up, as each starting pitcher has taken their turn in the spotlight so far this year.

Nick Dean allowed zero earned runs in his first 14 innings, then Ryan Ramsey stepped up to strike out 24 combined batters in outings against Cornell and Siena. Ramsey was also able to stymy Dallas Baptist earlier this season.

Now with the offense surging, Savacool has taken the spotlight. And that seems to have reached its peak drama as the sophomore refused to come out late against Illinois — motioning towards the field while he repeated, “I’m going back out.”

As it worked out, it was a power move by Savacool.

The sophomore turned in a 1-2-3 crucial eighth and spun off of the mound in excitement as he landed a strikeout to cap it off. Nigel Belgrave went on to finish off the game as Savacool’s gamble paid off.

The emergent pitcher gets another chance to showcase his skills this weekend against Northwestern — a lesser, but still crucial conference series for Maryland. It’ll be an opportunity for the Terps to clean up on defense, and continue slugging on offense.