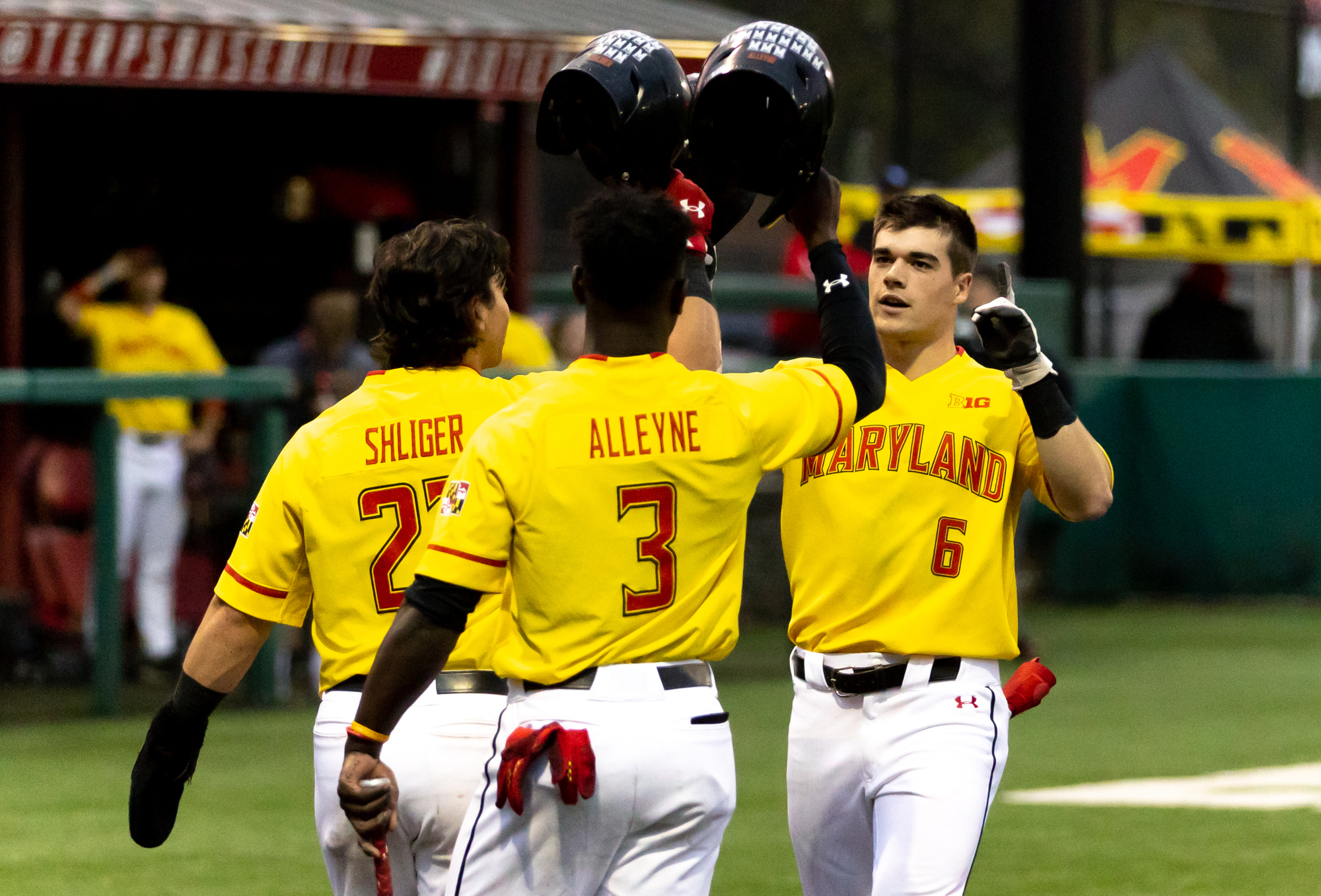 Despite surrendering a sizable lead to the Terps by the fourth frame, the Midshipmen fought back valiantly to tie the game. But against a high-powered Maryland offense, it hardly mattered.

Chris Alleyne broke the tie with a two-run home run as the Terps proceeded to find a myriad of ways to smash a baseball out of the park. The Terps explosive closing offense helped them blast the Midshipmen, 18-10.

“I thought offensively we were really relentless,” coach Rob Vaughn said. “I thought our two guys at the top of the order were unbelievable.”

Alleyne’s performance tied him atop the Big Ten’s home run list with 13 home runs.. He and Luke Shliger combined for three homers and eight RBIs.

But it took a tough road to get there.

Dark clouds, rain, and errors accumulated as both squads left clean defense behind with the absent sun in the first inning.

The pitcher allowed a single on the first batter he faced before catching a bad break as shortstop Matt Shaw fumbled a potential double-play on the next batter.

Johnson snagged a pair of outs, but Navy punished the Terps for their early mistakes with a powerful slap to left that scored two early runs for the Midshipmen. The freshman wrapped up the inning by forcing a flyout to give Maryland the opportunity to return the favor at the plate.

“I know [Andrew Johnson] didn’t have his best stuff tonight,” Vaughn said. “But the more he touches the baseball, the better he’s going to be, especially starting.”

The Midshipmen helped. A two-base error by Navy centerfielder Nick Burch off Alleyne’s laser single to center allowed the Terps fifth-year player to get to third base and scored Luke Shliger. Shaw then batted Alleyne home.

Logan Ott replaced Johnson in the second and proved to be the momentary answer on the mound. The typical starter stabilized the Terps as they looked to jumpstart their batting lineup.

“The great thing about [Logan Ott] is that you can use him one time through the order easily at any spot,” Vaughn said. “You can start him. You can bring him in the third, bring him in the sixth, he’s very good and multi-dimensional in that part.”

In the bottom of the third, Alleyne found another time to grab a notable on-field appearance. But this time, no mistakes boosted his play. He supplied a perfect swing, clobbering a pitch over the wall and out of view.

The Terps collected another run later in the inning via a Max Costes RBI single. They continued to pour on runs in the next frame.

Alleyne added his third RBI of the day on a single to left, and Shaw atoned for his early-inning error as he walked into the batter’s box. He found his pitch and drove it over the wall for a three-run shot.

“We’ve been a relentless group on offense all year,” Alleyne said.

Maryland grabbed the 9-2 lead after four innings — but Navy lurked.

The Midshipmen built their momentum with a flurry of hits capped off by a three-RBI shot to insert them into this game. Buzz filled the visitor dugout as Navy inched closer to the Terps’ lead.

Then the dam broke.

Navy rode an offensive wave that started with a solo homer to start the sixth inning as Maryland rotated through pitchers.

The Midshipmen finished the inning with four runs, erasing the Terps’ seven-run lead. This game looked far from over.

Alleyne had other plans, rocking a three-RBI homer to right-field and reinvigorated Maryland. Homers from Bobby Zmarzlak and Shliger in the seventh inning put the Terps back in front shortly after their in-state rival had surged forward to tie.

“I think we’re all pretty confident,” Shaw said. “We’ve had tight games before…I think we were confident we were gonna get the lead back and win the game.”

“Most teams I’ve been a part of and most teams that are in college baseball lose those games because of the momentum shifts,” Vaughn said. “These guys just don’t blink.”