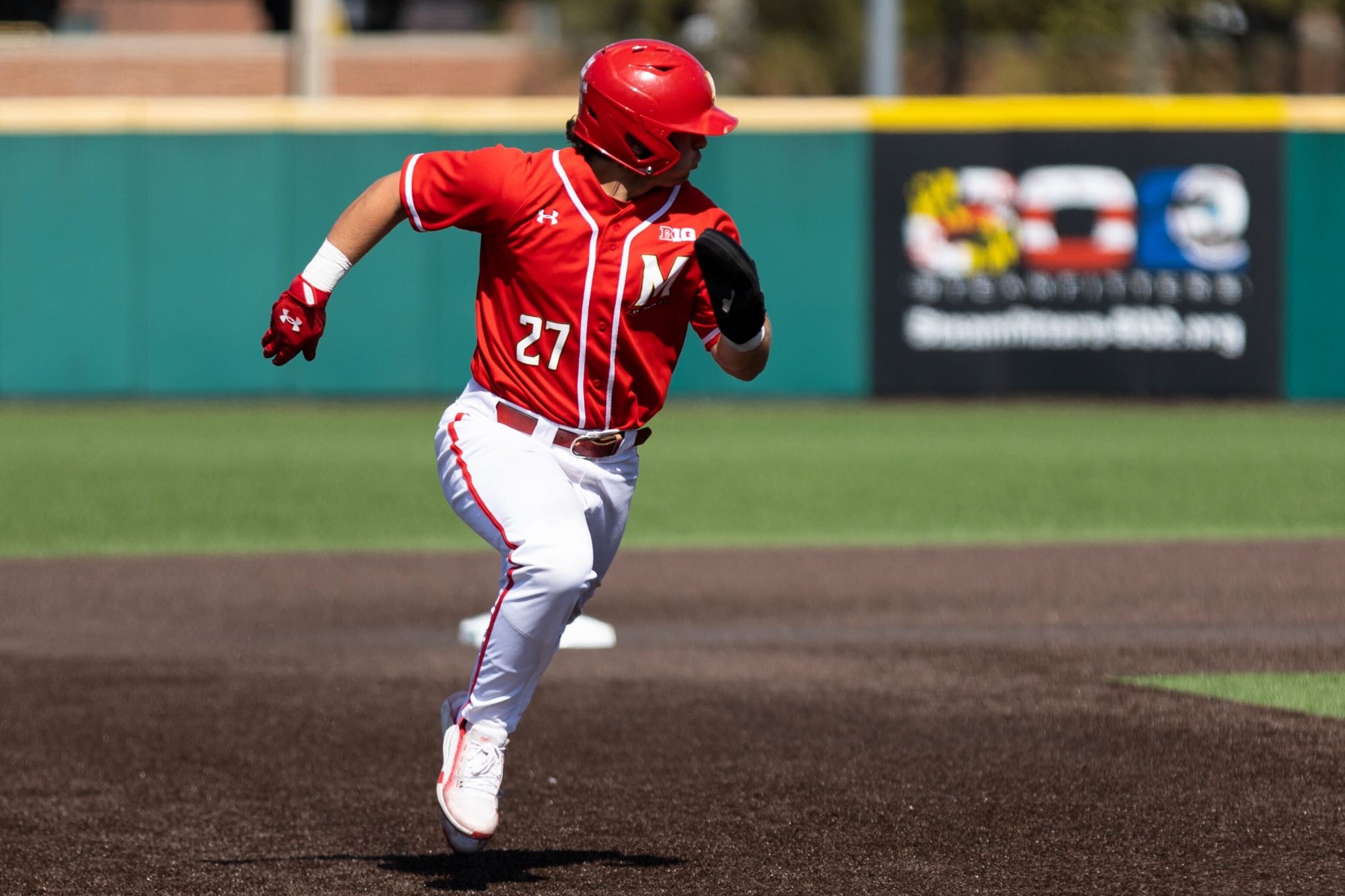 Two squads near the top of the Big Ten standings fought like heavyweights on Saturday, taking punch after punch in 19 total innings. The opening match of the doubleheader reached its climax in the tenth inning when Maryland landed two decisive blows against Illinois.

Luke Shliger delivered the first shot in extra innings with a two-out two-run double into left center. Chris Alleyne followed with a two-run homer that split the game open with a lead that the Fighting Illini couldn’t recover from.

Maryland swept Illinois in a Saturday doubleheader to win the series. It defeated the Fighting Illini in game one, 13-9, and in game two, 7-4.

It was Shliger who kicked off the scoring in the first game, launching a leadoff solo home run to give the Terps and pitcher Ryan Ramsey an early 1-0 lead.

But Illinois answered in the bottom of the first with its own leadoff solo home run by Danny Doligale that knotted the score.

Troy Schreffler came back in the second inning with another towering leadoff home run to make it 2-1 in favor of the Terps.

The Fighting Illini scored two runs in the third inning to take a lead, but a Maxwell Costes double and an Ian Petrutz’s two-out RBI single tied it up once again. Then in the sixth inning, Bobby Zmarzlak went deep to left field for his ninth home run of the year to give the Terps a 4-3 lead.

Maryland wasn’t done scoring in the inning. It tacked on two more when Chris Alleyne drove the ball into the gap to put the Terps up 6-3.

All three of the Terps’ sixth-inning tallies came with two outs. They had 10 two-out RBIs and batted 8-for-18 with two outs in the first game.

“I thought our offense was outstanding today,” Vaughn said.

Ramsey finished his afternoon outing with a clean bottom of the sixth inning before Vaughn turned the ball to Sean Heine and the Maryland bullpen for the final nine outs.

The Terps responded, scoring two off a Kevin Keister home run in the eighth inning. They added another in the ninth inning off a Matt Shaw sacrifice fly to go up 9-6.

David Falco came in for a six-out save and notched the first three. In the ninth, he put runners on first and second with two outs but got the ground ball he needed to ice the game.

That would-be final out took a bad hop and went past Shaw into left field, extending the game and tightening the score to 9-8.

A Cam McDonald single tied the game at nine as Illinois celebrated and Maryland attempted to regroup. It’d do just that with that four-run inning and a key double play turned by Shaw to erase a bases-loaded jam and seal the opening game victory.

In game two, Illinois jumped on Jason Savacool for three runs in the bottom of the first.

“I gave up the lead pretty early and our guys really picked me up,” Savacool said.

But Costes responded with a solo home run in the second as he continued his march towards the all-time home run record.

In the third inning, Maryland scored three runs off a Shaw sacrifice fly, a Schreffler triple and a Costes RBI double to earn a 4-3 lead that was quickly erased by a Jason Campbell solo home run quickly in the bottom half of the frame.

After Alleyne scored on a hit and run to give the Terps a 5-4 lead, Savacool ran into trouble in the bottom of the fifth, loading the bases with zero outs. But the second-year pitcher buckled down with a strikeout and a double play to get out of the jam unscathed.

Savacool would pitch scoreless sixth and seventh innings. He would return for the eighth inning despite being over 100 pitches. He rewarded Vaughn’s confidence with a 1-2-3 inning, finishing his outing with a fist pump after pitching eight innings and striking out nine.

The Terps added two insurance runs in the eighth and ninth innings before Nigel Belgrave pitched a clean inning to close out the doubleheader sweep.

After getting blown out on Friday, Maryland answered every test Illinois threw at them to come away with an important road series victory that could be crucial for postseason implications.

“What an unbelievable job by everybody today in just being tough,” Vaughn said. “It’s not easy after days like [Friday], you see a lot of teams that have a hangover, and this group flushed it, they knew that it was a new day and they came out and played outstanding today.”