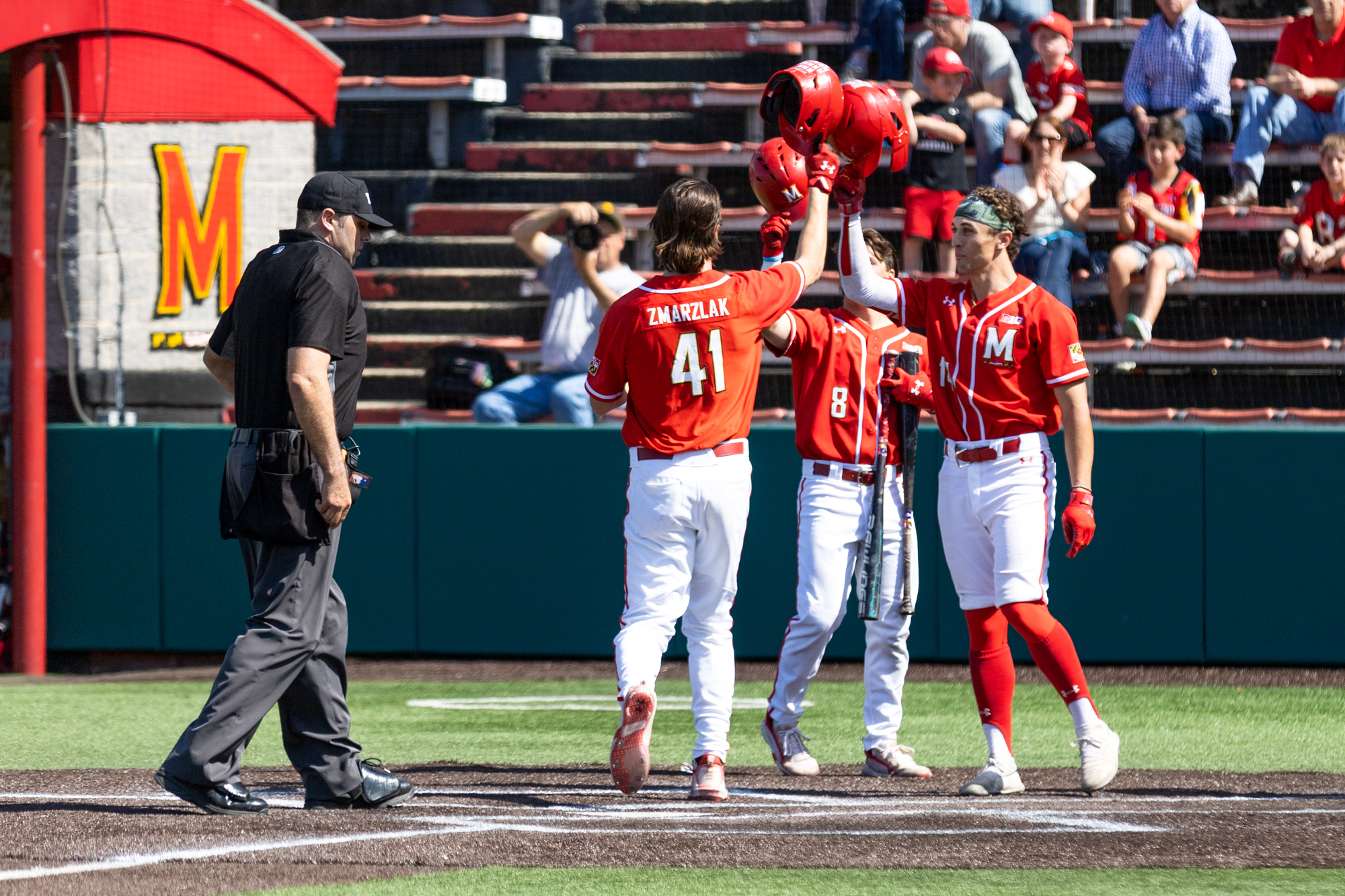 Bobby Zmarzlak hadn’t fulfilled expectations at the plate this season. Maryland baseball’s physically imposing left fielder had an encouraging sophomore campaign but left something to be desired early in his junior year.

Woeful strikeout numbers punished his offensive statistics. The low point was a two-game stretch against Dallas Baptist when Zmarzlak punched out seven times.

If the Terps were to launch a deep expedition into the postseason, Zmarzlak needed to catch up to a surging lineup.

That process started with a curveball in the bottom of the ninth inning of Maryland’s series opener against Ohio State.

The Terps faced a 6-5 deficit but had two runners on with no outs. Zmarzlak came up and only needed a simple base hit to tie.

But with a hanging breaking ball that sat in the strike zone — the junior aimed higher. He wrecked the ball into left-center and watched it all the way to first base, flinging his bat high into the air.

“I just wanted to put the ball in play [and] make something happen,” Zmarzlak said after his walk-off three-run shot. “Saw the curveball really well and put a good swing on it.”

As he ran the bases, he broke from his usually soft-spoken nature and screamed in excitement while looking at his teammates flooding home plate. He’d walked off the Buckeyes in dramatic fashion and helped Maryland avoid its second home loss, earning his two Gatorade showers.

“I think it’s something he can always go to,” Vaughn said. “The tape that plays in your head when you’re going to sleep at night, him going to sleep seeing [the walk-off] is huge.”

The next day, he cut into a 3-0 Ohio State lead by slapping a two-RBI homer. In the series finale, he delivered a key two-RBI double as the Terps romped the Buckeyes for a 16-1 series sweep victory.

He even found the winning run in their most recent contest, smashing a solo shot against Towson to help Maryland escape in extra innings.

“When the spot gets tight, I think sometimes guys want it so bad that they get in their own way,” Vaughn said. “Zmarzlak [has] a really good mentality with that.”

One swing rerouted Zmarzlak’s season and now, he’s sitting amid a spectacular four-game stretch. He has seven hits, nine RBIs, three homers and just three strikeouts in his last 16 at-bats.

He built on that one walk-off swing against the Buckeyes due to work with hitting coach Matt Swope.

“He has put countless hours in with Swope. Just coming in and doing the same stuff Ben Cowles did last year,” Vaughn said. “Over the last week to today, you’ve seen the [batting practice] start to trend up. You’ve seen his misses start to be a little louder and more of what you want.”

With his emergence, an already dangerous Maryland batting lineup becomes even more terrifying when it’s firing on all cylinders. The Terps are just past the halfway point, and they may have added another impact bat with his emergence.