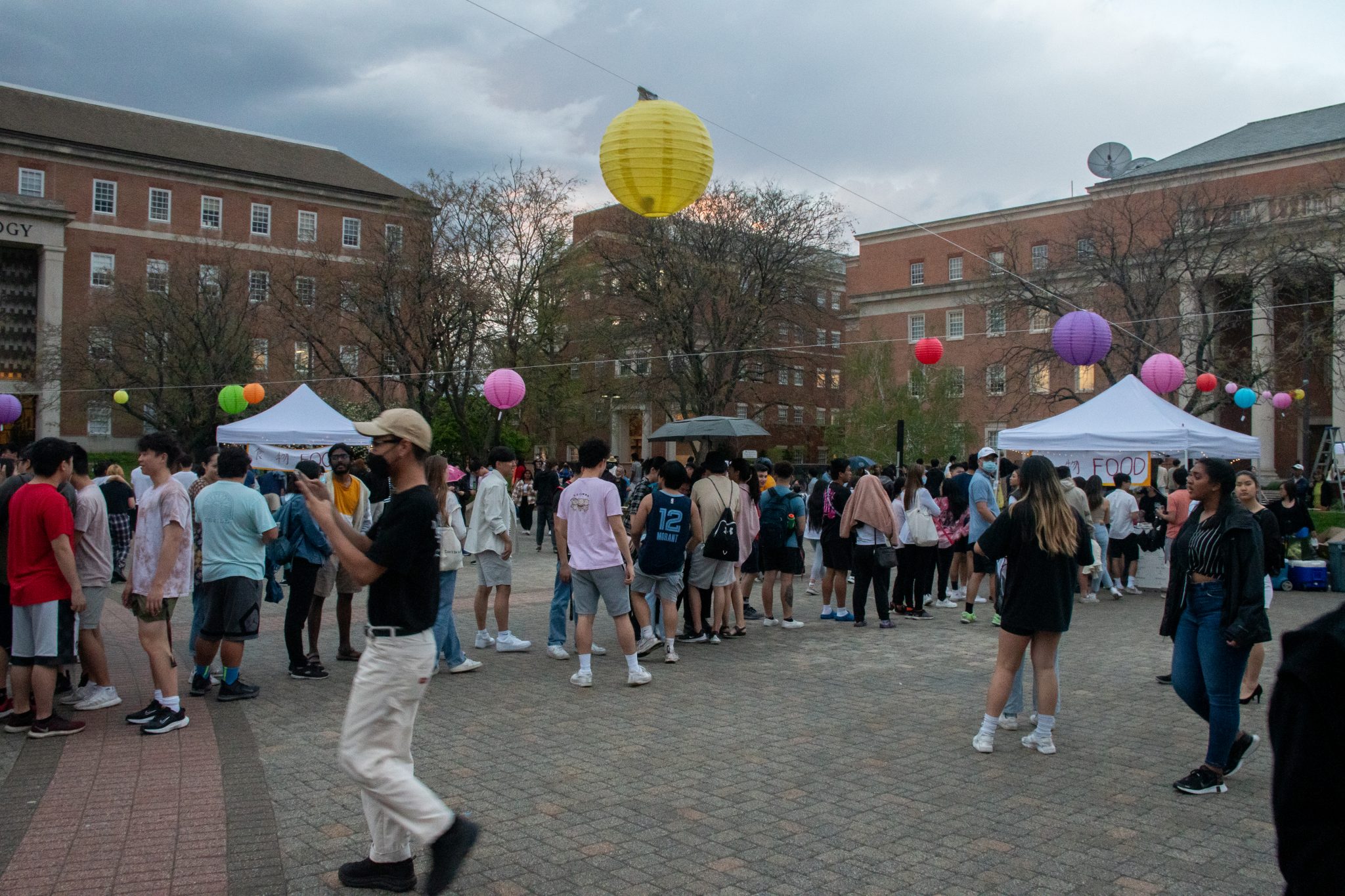 Students stand in line for booths at the Night Market in Hornbake Plaza on April 16, 2022. (Xiaozhuo Zhu/for The Diamondback)

This was the group’s first in-person Night Market in years due to the COVID-19 pandemic and its first outdoor market ever. The market has been held virtually since the onset of the pandemic. Prior to the pandemic, it was held in Stamp Student Union’s Grand Ballroom.

“I don’t think any of us have actually seen an in-person night market,” said junior physiology and neurobiology and psychology major and TASA co-President Clarissa Xia. “This was our first outdoor Night Market but also our first outdoor big event, so it was definitely a lot to handle.”

“You can just turn on a light switch and have the electricity but for outdoors, we had to find contractors to get ourselves generators, to get an audio system, to talk about lighting and an outdoor stage,” the junior finance major said.

The team was also concerned with unpredictable weather. They had to come up with contingency plans in case it rained, which included an indoor room setup, weather-proofing outdoor equipment and a rain date. TASA did face some rain before and during the event.

“I think it was just an unfortunate turn of events,” Hsu said. “But we were kind of lucky that most of the big weather stuff happened before the event occurred.”

“The entire day was super sunny, super warm and then an hour before the event, it just decided to start pouring,” she said.

Still, when the event started at 7:15 p.m., 15 minutes late due to the rain, huge crowds of people had already arrived. TASA had expected about 900 people to attend the event.

Some people, such as senior computer science major Charlie Zhang, came to the market to hang out with friends.

“A lot of my bros from wiffle ball are also here, so I wanted to come out,” he said.

Others simply stopped by for the food, like Yow-Ting Shiue, a computer science doctoral student.

“I’m from Taiwan and I love Taiwanese food,” she said.

The event featured live performances from student groups ranging from music to dance routines and even stand-up comedy. The event finished with a dance featuring TASA members.

The event also featured various games such as ring toss and cup pong.

“It’s a shooting game where you try and knock over a stack of cups, so I think I’m a little biased, that’s my favorite,” the sophomore aerospace engineering major said.

While TASA faced many setbacks and problems in getting the event up and running but thanks to their adaptability, the group managed to still create an event they were proud of.

“I’m very, very proud of everything that we were able to accomplish, not just within the 24 hours of setting up and cleaning up for the actual event, but also the months and months of planning that had gone into it,” Wen said.