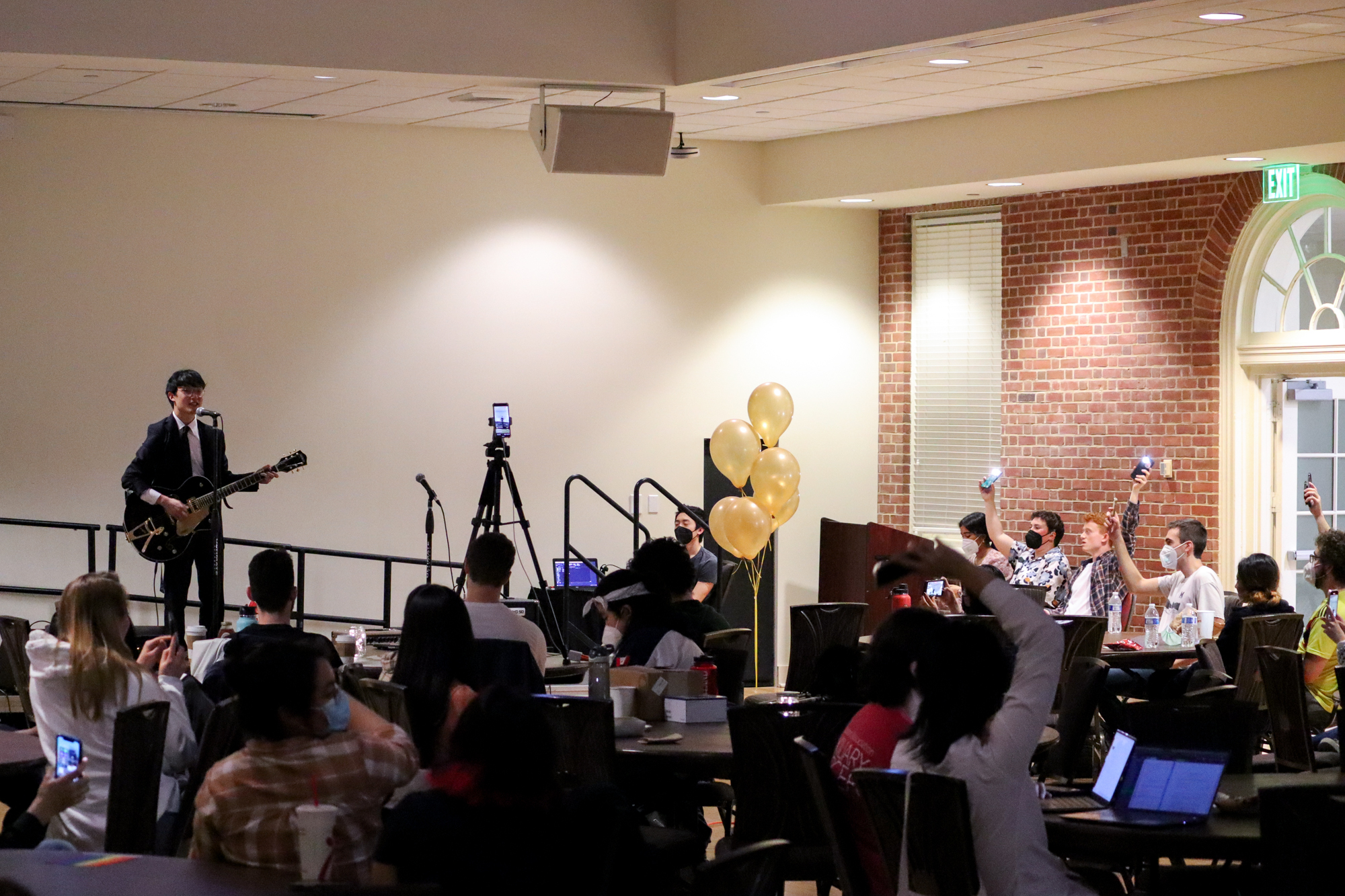 The crowd at Coffeehouse on April 26, 2022, waves flashlights as Peter Kim sings a cover of "Lean on Me" by Bill Withers, a reference to one of the organizing groups, Lean on Me College Park. (Nathan Blanken/Active Minds)

Several mental health advocacy groups at the University of Maryland came together Tuesday night to entertain students and inform them about campus mental health resources.

The event was hosted by three student-run mental health advocacy groups: Lean on Me College Park, a text line for anonymous support; the UMD Help Center, a peer counseling and crisis intervention hotline; and Active Minds at UMD, a mental health awareness, education and advocacy group.

Each group selected a charity for its raffle earnings to go toward, splitting the proceeds between the National Alliance on Mental Health, the Suicide Prevention Lifeline and The Trevor Project. Each charity was represented by a glass jar on the raffle table.

Lean On Me President and co-founder Tesia Shi estimates the group raised about $150. Shi, a junior biology and psychology major , was inspired to start Lean On Me College Park when she saw a gap in the resources available to students.

“When I came onto campus as a freshman, there was no text option for mental health help at UMD at all,” Shi said. “I just kind of felt like, ‘Hey, that’s kind of weird for a college campus where so many students use their phones.’”

Senior family science major Peter Kim heard about Lean On Me’s Coffeehouse from another performer’s Instagram account. He thought it would be a good place to show his talent, so he donned a suit and belted out a rendition of “Lean on Me” by Bill Withers that quickly had phone flashlights waving in the crowd and the occasional onlooker joining in the chorus. Kim didn’t know much about the host groups going into Coffeehouse and was surprised to learn about the many resources available for mental health needs.

“I thought we had maybe a couple,” Kim said. “But it was good to see there was a lot of representation for all the [organizations] on campus — for a good cause.”

Coffeehouse was sponsored by One Love UM, CARE to Stop Violence, the Multi-Ethnic Mental Health Organization and the Student Health Advisory Committee. Between performances, each group was able to inform the audience about their services. These transitions were often punctuated by puns from two emcees from Lean On Me, freshman computer science major Wren Poremba and sophomore public health science major Sneha Abraham.

Abraham, a junior marketing coordinator with Lean On Me, said her experience with mental health issues motivated her to do the six-week training to become a supporter for the organization.

“I realized how important mental health was and I started looking for some mental health organizations on campus,” Abraham said. “I found Lean On Me, and that’s when they were just getting started.”

According to Shi, Coffeehouse was the first Lean On Me event to be open to the public since she established the chapter in the fall of 2020.

Poremba is a supporter coordinator and will enter a co-president role next semester.

“[Being a supporter] feels honestly really good, especially since you’re a peer helping a fellow peer,” Poremba said. “All the things we get texts about, you can really relate to on a deeply personal level. And so it doesn’t feel like you’re talking to a complete stranger because you do have that common ground of you’re both students at UMD.”

Sophomore communication major Cyrus Escalera performed at Coffeehouse. On stage and social media, he goes by Cyreese. Tuesday, he performed his original song “What’s On Your Mind?” and Cannibal Kids’ “Troubled Mind.”

“I knew UMD had some awesome resources on campus for mental health but I think they’re actually a bit better than I had originally thought,” Escalera said.