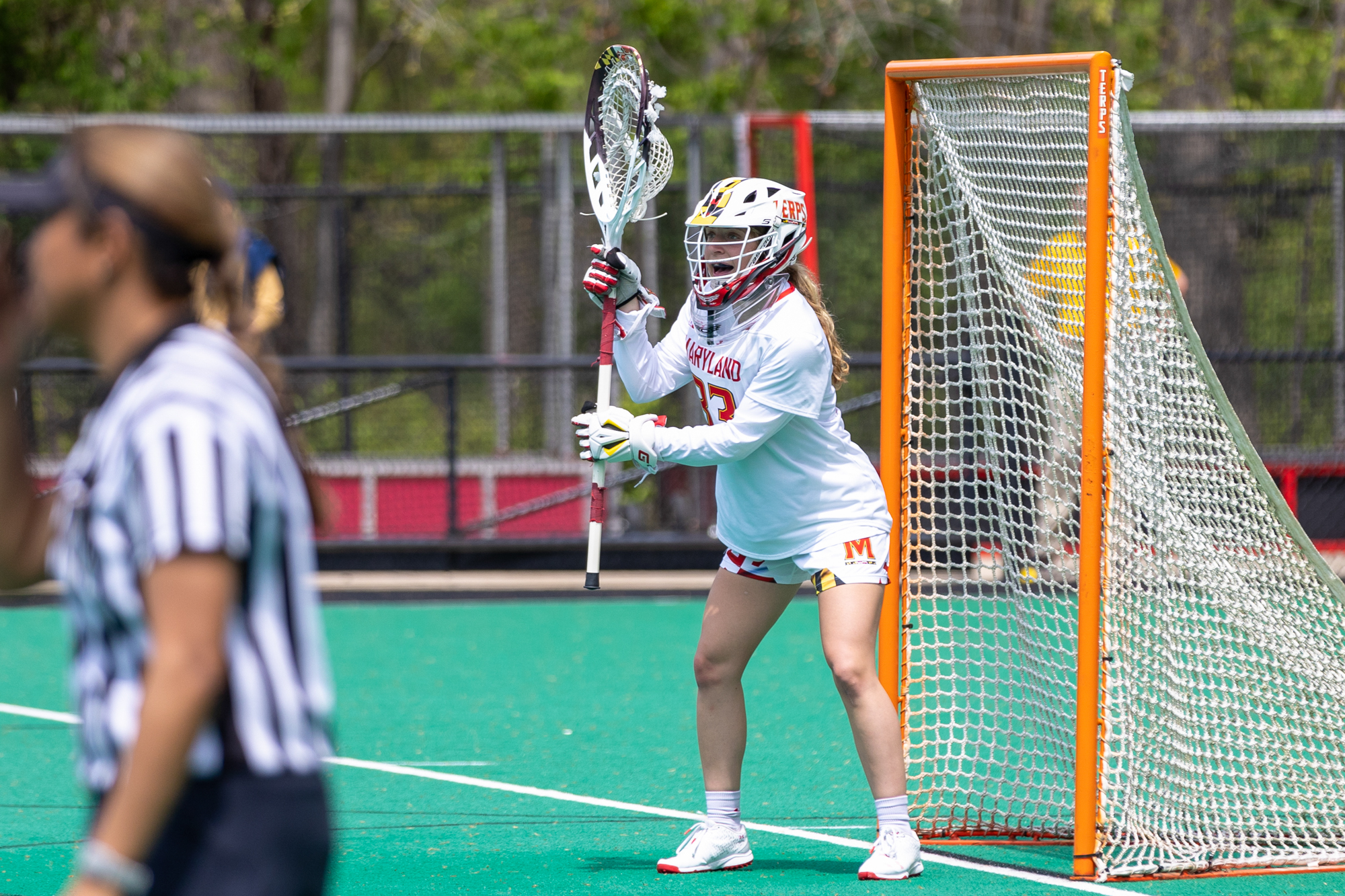 Northwestern attacker Jill Girardi pushed through Maryland women’s lacrosse’s defenders and attempted to fire the ball down into the cage with her first chance of the game — but Terps goalkeeper Emily Sterling blocked her shot and sent the ball flying down the field.

Less than one minute later, the Wildcats were on the prowl again, sending another shot flying toward the net.

Once again, Sterling was there.

The goalkeeper cut off the goal attempt with a flick of her stick and proceeded to make two more saves in Northwestern’s opening possession.

With four saves in the first three minutes, Sterling’s strong performance in the cage set the tone early for the No. 8 Terps in their resounding 15-9 victory over the No. 2 Wildcats.

“When you know that the person next to you has your back no matter what, it just brings the play to another level because you’re not scared to mess it up,” Sterling said.

The Big Ten defensive player of the week set a new career-high with 16 saves in Saturday’s contest, blocking 10 shots on goal in the first half.

“We were really disciplined on the defensive end,” coach Cathy Reese said. “We put Emily in position to make saves, and she crushed it. I mean, she was phenomenal.”

Coming into the top-10 battle, Reese knew her team needed to limit the Wildcats’ opportunities. Northwestern is one of the most goal-happy teams in the nation, averaging about 17 goals per game this season.

But with Sterling at the helm — saving 64 percent of shots on goal — Maryland limited Northwestern to just nine goals, paving the way for an upset victory.

“When I get to see my teammates shoving the ball down the back of the net off a huge play, it’s just so exciting, then we’re like, ‘Okay the next ball is ours,’” Sterling said. “The energy just goes both ways.”

In what is just her first full season of college lacrosse after shortened schedules for the past two years, the junior has flourished. She’s won four Big Ten defensive player of the week titles, and last week was named one of 25 players nominated for the Tewaaraton Award.

Sterling currently leads the nation with a 55.4 percent save percentage and has only conceded 90 goals all year.

The goalkeeper’s performances throughout the season have helped her grow into a defensive leader for Maryland, helping her communicate with her teammates to build a stronger defensive unit.

Sterling and the Terps’ defensive performance helped Maryland dominate its longstanding rivals and clinch a share of the Big Ten regular season title. However, the junior hopes to accomplish much more before the season is over.

“This is just the beginning,” Sterling said. “Enjoy this feeling, but tomorrow we have another game to prepare for and then we have two tournaments that we have our eyes on.”