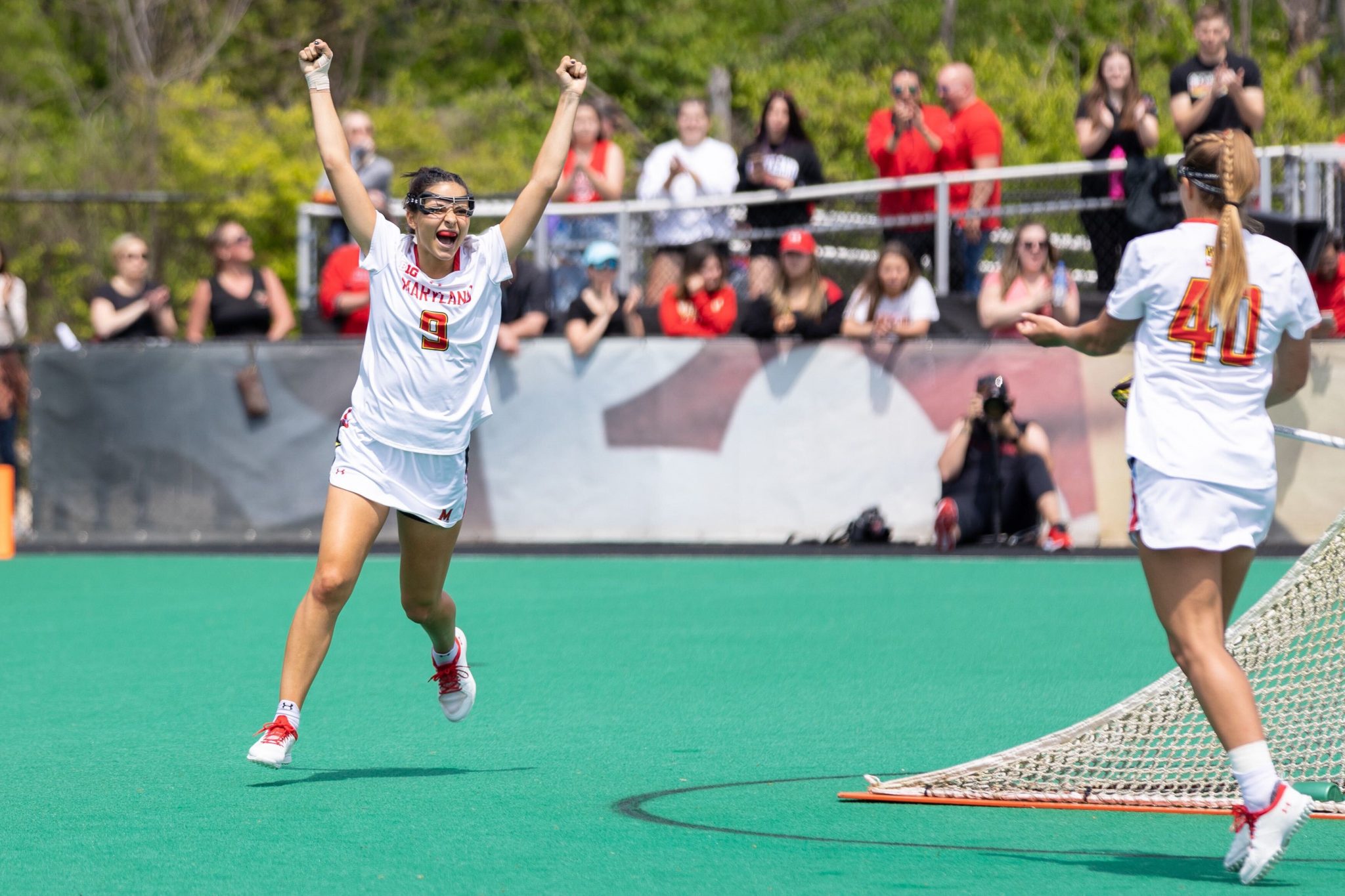 Darting through defenders, Libby May made herself open for a pass from Aurora Cordingley. May caught the ball and chucked it over the goalkeeper’s head to score her sixth goal of the game.

May’s breakout performance propelled No. 8 Maryland women’s lacrosse to a dominant 15-9 win over No. 2 Northwestern, clinching a share of the Big Ten regular-season title and the No. 1 seed in the upcoming Big Ten tournament.

“I get a little teary eyed and emotional but I think it’s because I’m just so proud,” coach Cathy Reese said. “To come out and execute and play fearless is something I’m just really proud of.”

Northwestern went on the attack early, showcasing its aggressive offense that had steamrolled opponents in earlier games. But Emily Sterling stood strong with four saves in the opening three minutes of the game.

Maryland stayed calm and collected on offense, taking its time to find the first looks on goal. It paid off with goals from Hannah Leubecker and Shannon Smith to send the Terps into an early lead.

The Wildcats fought back with their first goal of the game to decrease the Terps’ lead to one. May quickly responded, firing the ball in to restore Maryland’s two-goal lead.

Northwestern came back with a vengeance, as Carleigh Mahoney and Samantha Smith scored back-to-back goals to tie the game at three.

Both teams stayed aggressive throughout the opening quarter, riding each other hard in the midfield to cause turnovers and limit time spent on the attack. A fierce shot from May with less than a minute left capped off the quarter and gave the Terps the lead again.

Northwestern finally responded with a goal from a free-position shot, but the Wildcats couldn’t use it to build momentum. Maryland’s defense stifled shots and Sterling was dominant in the cage, tallying 10 saves in just the first half.

“Every game that we go into, we just want to show the world what Maryland lacrosse is about,” Sterling said.

The Terps continued to flex their dynamic offense, as Leubecker and May both scored to build the lead to five goals.

Northwestern found its footing at the end of the first half through a goal from Dylan Amonte, but May responded once again to give Maryland a 10-5 lead at halftime.

Griffin opened up second-half scoring, launching the ball into the net as the shot clock expired to extend the Terps’ lead to six.

With Leubecker out on a yellow card, Northwestern hoped to launch an attack against Maryland. The Terps’ defense was still able to deny the Wildcats despite being a woman down as they continued to cause turnovers.

May notched two goals in the third quarter as Sterling continued to suppress Northwestern’s usually goal-heavy offense, racking up six more saves in the second half to set a new career-high.

The two helped spear a 5-0 run for the Terps, which Clevenger capped off with a nice cut and finish on an assist from May. The Wildcats charged down the field and fired their first goal of the second half to close out the third quarter.

The fourth quarter started with an aggressive back-and-forth before Northwestern scored on a free-position attempt for its seventh goal of the game.

May answered with her seventh goal of the game, breaking her career-high of five goals.

The Wildcats scored twice more, but they couldn’t do enough to overcome a Maryland team that was playing at its best.

“When we step out there together and we play hard and we play with poise and determination, nothing can stop us,” May said.