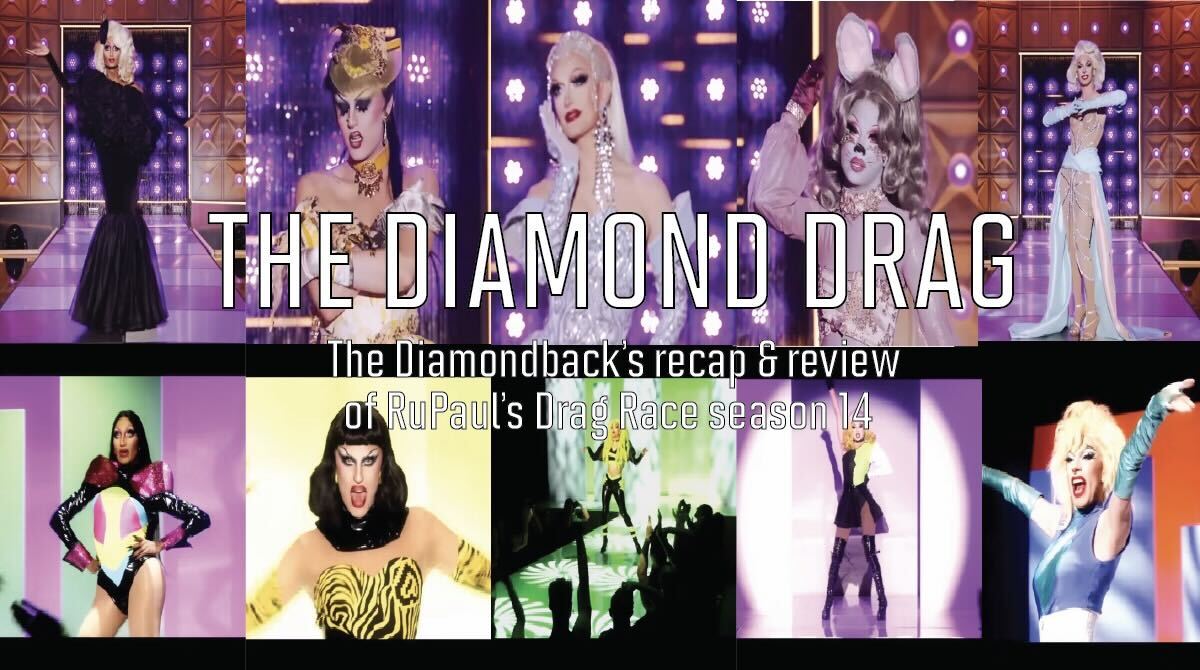 The Diamond Drag fell behind again, but the most significant thing missed from episode 13 was Bosco’s third win during the roast of Ross Matthews and the three way lip-sync between Daya Betty, DeJa Skye and Jorgeous. The lip-sync for your life ended in both DeJa and Jorgeous sashaying away in the U.S. franchise’s third ever double elimination.

Following the double elimination, the final five queens enter the Werk Room shaken but excited to be in the finale. It’s that time of the season once again where the queens count up their wins. Willow Pill and Daya both have one, Angeria Paris VanMichaels and Lady Camden each have two and Bosco has three.

The next day, the queens enter the Werk Room for their final challenge. RuPaul comes in and announces for their final challenge, the queens will star in RuPaul’s new music video for his song, “Catwalk.” The queens have to write original lyrics, learn choreography and design an outfit that will be worn in the video. The queens will also sit down with Ru and Michelle Visage for a Tic Tac lunch.

I love the finale RuMix challenges, but only when the song is good. Sometimes the verses are kind of cringey or the RuPaul song they choose is bad, but “Catwalk,” is pretty good so I’m excited.

Immediately, the queens begin writing their lyrics, and everyone is working to make the best verse possible. There’s some pressure on Angeria after her success in the girl group challenge and having the winning song from the talent show — remember way back in episode two?

Willow seems to be a little nervous about her verse, but it really made me laugh when she proposed the hypothetical of trying to scat her verse.

We also see the queens sketch out their looks. Bosco tries to do something that is not a bra, panty and corset after being called out for wearing that outfit pattern on the runway.

The queens then go to have their Tic Tac lunch with Ru and Michelle, and I have two words to sum every conversation up: trauma dump.

The queens go to a soundstage to learn the choreography. I was confused as to why they were in full drag, as they hadn’t done that before with RuMixes but quickly, it’s revealed the queens would have to shoot the video shortly after learning the choreography. The queens begin with their group choreography first, and Angeria is kind of struggling. She’s selling it, but she did every five dance moves. The queens then go to film their solo verse choreography and generally, everyone does well.

It’s finally the last day, and the queens are feeling sentimental as they hit the final runway — the category is “you’re a winner baby.” Generally, everyone looks great. Every look was uniquely each queen and was incredibly regal and elegant. I think my favorites were either Lady Camden or Willow Pill.

We get to watch the “Catwalk,” video and the RuMix, which were … OK. I don’t want to say it is bad because parts of the verses are still stuck in my head, and I hum the song to myself but genuinely, the RuMix was just not good. I’ll probably never listen to it ever again unless I see it on TikTok. I think Angeria and Willow had the best verses, but didn’t sell their choreography. I think Daya had a great performance, but had a ‘meh’ verse. Lady Camden was, in my opinion, the one who was the most consistent in both verse and choreography. Bosco’s verse was just cringe.

It’s time for the final critiques, but most importantly the final, final trauma dump moment for the queens. RuPaul holds up a picture of each queen as a kid and asks, “What would you say to your younger self?” I think it’s a really sweet and important moment of the show as it has a young queer audience, so having that moment can mean a lot to them.

Lady Camden is announced the winner of the challenge, securing her third win of the season and a spot in the finale. RuPaul announces Daya Betty and Bosco are both safe, meaning they made it to the finale, leaving Willow Pill  as well as Angeria Paris VanMichaels in the bottom two.

This killed me. This literally felt like I was dying. It felt like RuPaul shot me in the foot, then punched me in the stomach and then kicked me down. The two lip-sync to “Telephone,” by Lady Gaga and Beyoncé. Now I love the song, but why did RuPaul have the queens perform this song in gowns? The lip-sync was good, but I honestly felt like I was having an anxiety attack the whole time because I want both queens in the finale. Angeria is announced the winner, and I think I died. But, after a long dramatic pause Ru announces Willow is also the winner — I felt revived. It is announced for the first time in Drag Race herstory, there will be a final five in the finale.

I was so happy for about 10 minutes and then it hit me — there was another non-elimination this season. Regardless, I’m happy both Angeria and Willow made it to the finale. As we enter the last episode, I am personally rooting for Lady Camden to take the crown. Regardless, I’m so happy with this top five and cannot wait to see which queen gets crowned.