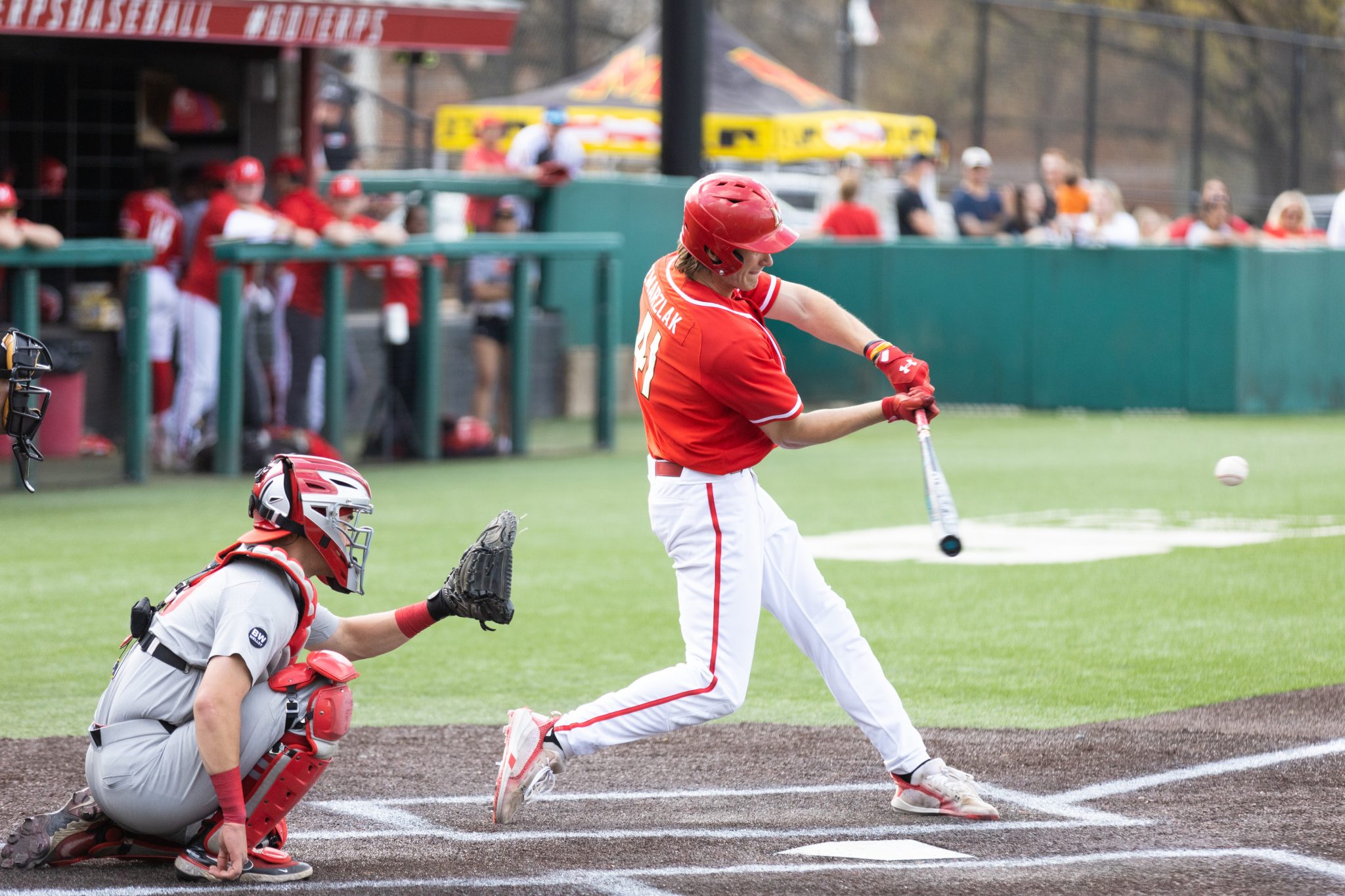 Bobby Zmarzlak came up clutch for Maryland before.

And today, with the Terps in imminent danger of falling to Towson in extras, Zmarzlak delivered the timely blow once again.

Smashing a late solo homer to give Maryland the lead in extras, Zmarzlak and the Terps never looked back as they escaped a late comeback attempt from Towson, 4-3.

“It was a tough day to play — cold [and] windy — but we got the timely hits and we got the win,” Zmarzlak said.

Likely encouraged by their dynamic offensive success in their last meeting against Towson, Maryland baseball took the plate against one of many throwers that the Tigers have shoved out onto the mound in a season full of pitching woes for them.

The Terps put up 26 runs on Towson earlier this season, but couldn’t repeat the showing as Towson stunted Maryland’s efforts at the plate. The Terps struggled with punch-out woes in the first three innings — failing to string together anything significant.

“[Their pitchers] were funky, a lot of off-speed [throws],” Zmarzlak said. “But glad we got it done.”

“We wanted to give Andrew Johnson a run at it,” Vaughn said. “[Johnson’s] been doing good in all the stuff he’s been doing … you use Ott right behind him, it’s a good mix.”

The breakthrough came for the Terps in the fifth inning.

Directly after one of a couple pitching changes for the Tigers — Towson had six pitchers on the day — Maryland landed Troy Schreffler on first from an error, and he advanced on a passed ball.

With the stage set, Kevin Keister took his stint in the batter’s box. While Maryland’s offensive flame had been withering, Keister dumped gas onto the fire.

Slamming an RBI single to center, Keister ignited the scoring for the Terps as Schreffler crossed home plate.

After a foul-out from Riley Langerman quelled the blaze briefly, Luke Shliger hefted tinder onto it.

The sophomore smashed a two-RBI homer to right — landing Maryland its first decisive lead of the day on a hard offensive outing.

“Shliger had a great day today,” Vaughn said. “I thought [Nick] Lorusso was on the barrel the entire day and I think he ended up 0-for-4 and was hammering balls with nothing to show for it.”

Vaughn’s squad continued to hold a tight lead — their offense couldn’t use the inning as a turning point for the rest of the match.

Their pitching remained solid however, even when Ryan Van Buren subbed into the game in the sixth looking to maintain the Terps lead.

The freshman largely stabilized the advantage until a double in the eighth was enough for Vaughn to yank Van Buren for Sean Heine.

Heine surrendered an early RBI single and created some late tension as Towson added a second run off the succeeding at-bat with an RBI double. Maryland’s 3-2 lead looked tenuous.

Heine escaped the eighth and the Terps found nothing to pad their lead in the top of the ninth. The Tigers only needed one run to tie, and they got it.

Dave Falco had the mound for the bottom of the ninth, but one pitch and one solo homer from the Tigers later and Maryland found itself in a tie-game. The Terps could’ve quickly found themselves stunned, but Falco recovered to send the game into extras.

Zmarzlak had what Maryland needed as he led off the tenth.

“Not a lot of great offensive performances today and then Bobby [Zmarzlak] comes up in a big spot when you need him and got a hanging slider,” Vaughn said. “Hitting something over the fence was not an easy feat.”

Sending a ball flying over the fence, the junior grabbed the lead for the Terps and they took it home as they fended off Towson’s upset attempt.

“Realistically the team’s not scared to play from behind and [they] aren’t scared to play tight games … you got to be good at winning close games if you want to play a while into June,” Vaughn said.