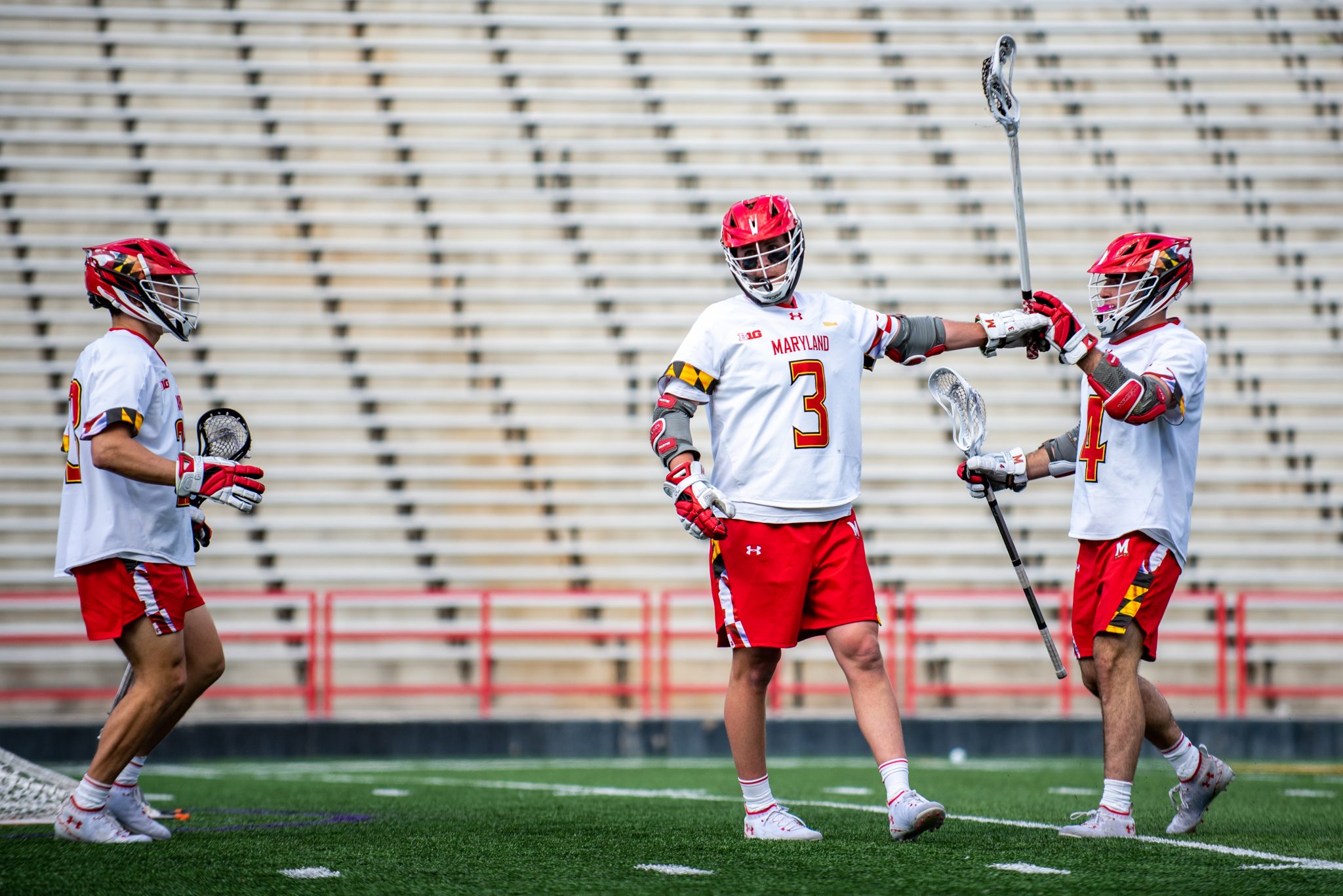 Only up by one goal with 15 minutes to go, Maryland men’s lacrosse was in a spot it hadn’t faced all season.

The Terps thrived under the pressure. Anthony DeMaio and Logan Wisnauskas found the back of the net in just over a minute to push Maryland out to a three-goal lead.

Wisnauskas dished out his second assist of the game to Eric Malever. And minutes later Jonathan Donville spun past a defender and passed it to Keegan Khan at the back post for a simple finish.

“We know we can score or at least create opportunities,” coach John Tillman said. “There’ll be more opportunities so there’s never a sense of panic. Just felt like we were just not patient enough a little bit.”

The victory secured Maryland a share of its second-straight Big Ten regular-season title.

The Terps tallied twice in the first minute of the game. Malever drove straight to the net and scored before a bouncing Roman Puglise shot wrong-footed Ohio State goalkeeper Skylar Wahlund.

The Terps regained the lead with an off-balance shot from DeMaio, but five first-quarter turnovers led to a 15-minute scoring drought as the Buckeyes stormed ahead.

Jack Myers fought through multiple defenders before slotting a shot past Logan McNaney to tie it. He then found Jackson Reid to give Ohio State its first advantage of the day.

Knox’s diving shot doubled the Buckeyes’ lead and made it 5-3 to end the first quarter.

“We were kind of taking the first opportunity, whether it was the first shot or the first look and we had some short possessions,” Tillman said.

McNaney struggled in the first frame, failing to record a save as the Terps fell behind early.

Coming out of the break, Ohio State picked up where it left off as Johnny Wiseman and Colby Smith put Maryland in its largest deficit of the season with just under 10 minutes left in the half.

Maryland let in seven goals in just over the opening 20 minutes, more than the Terps have conceded in the entire opening half of any game this season.

“I thought they were just a little step faster than we were,” Tillman said. “Whether it was just on ball positioning or slides or kind of getting caught staring at the ball.”

Logan Wisnauskas got the Terps back in their groove with back-to-back goals, halving the Buckeyes’ lead and ending a 5-0 stretch for the visiting side.

Bouncing shots from Donville and Jack Koras snuck past Wahlund to tie the game heading into halftime.

A Wisnauskas rip gave the attacker his hat trick and gave Maryland an 8-7 lead out of the break. Smith responded for Ohio State and Scott White found a cutting Ari Allen to reclaim the lead for the Buckeyes.

Brett Makar stormed down the field after picking up a ground ball and while he was initially looking for the shot himself, he found Puglise.

The defensive midfielder waltzed past a defender before finding the back of the net to tie the game once again.

“I think I can speak on behalf of everyone on our team — when you see Roman Puglise coming down the field trailing, you gotta get that man the ball,” Makar said.

Another Puglise goal was quickly canceled out by Myers, however the Terps clicked again on offense, starting an 8-1 run that stretched from the latter half of the third quarter to the beginning of the fourth.

Wisnauskas and Khan both notched goals before Luke Wierman won a faceoff, raced down the field and fired a shot into the back of the net.

Smith capped off the third quarter with an Ohio State goal, but Maryland’s fiery fourth quarter start quelled any chance of a Buckeye comeback.

The game opened up for the Terps after taking a lead, largely thanks to Wierman’s faceoff dominance. The junior won 7-of-9 fourth-quarter faceoffs, helping Maryland score a total of seven fourth-quarter goals and surge to a 19-12 victory.

After snatching at opportunities early in the shot clock at the beginning of the game, Tillman thought the Terps were much more efficient in those situations down the stretch.

“I don’t think it’s to your best advantage every single time unless it’s really wide open,” Tillman said. “We got a few of those late but I thought early we’re trying to force those things and [Ohio State] was buttoned up and did a good job.”