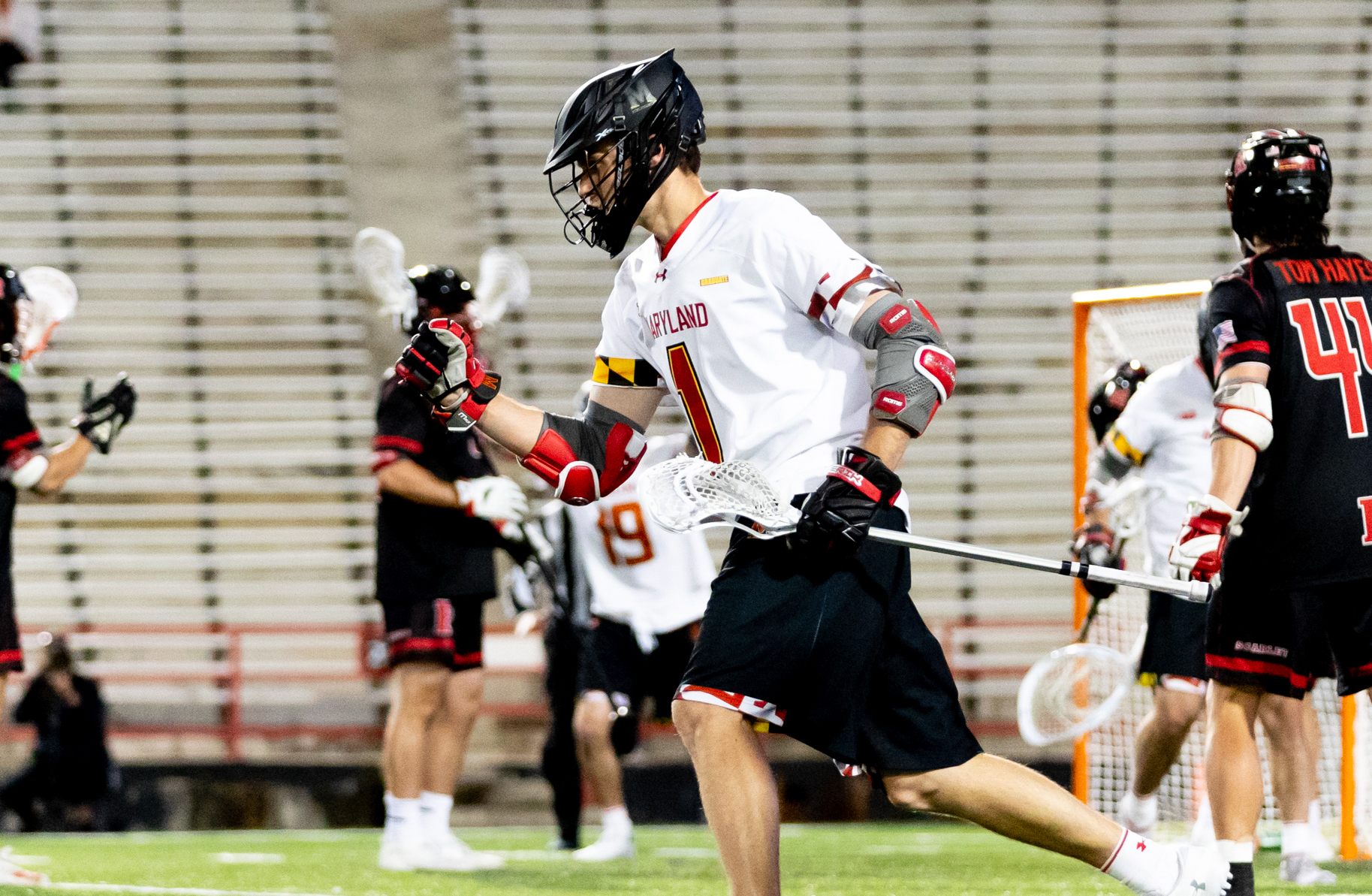 Logan Wisnauskas deked back and forth before threading a 10-yard pass to a cutting Eric Malever, who finished from close range.

The attacker went on to bag a hat trick of goals along with the assist as he etched his name into history during No. 1 Maryland’s 17-9 win over now-No. 7 Rutgers on Sunday.

“It’s awesome,” Wisnauskas said about breaking the record at Maryland. “Rich tradition, you know, you can come here and it’s really truly a brotherhood. You get to meet a bunch of people and carry relationships for the rest of your life.”

Wisnauskas now sits at 292 career points for the Terps, and has notched a point in all 67 of his career games for Maryland. He’s scored 33 hat tricks in those games.

Coach John Tillman praised Wisnauskas’ unselfishness and professionalism and talked about how it not only benefits the Terps on the field, but also sets an example for younger players in the program.

“He’s got a standard that he sets for himself, but it’s never about himself,” Tillman said. “To have that ability to be pushing yourself, yet being in a team concept and always being selfless, it’s not easy to find.”

The Maryland native joined the Terps after graduating from Boys’ Latin, located in Baltimore, and transferring following a redshirt season at Syracuse.

After a solid first year with the Terps, Wisnauskas exploded in 2019. As a sophomore, he led the team with 79 points, a mark that is tied for fifth in Maryland history.

Wisnauskas averaged six points per game over six games during the shortened 2020 season and totaled 72 points in 2021.

The attacker earned back-to-back Inside Lacrosse All-American third-team selections in 2020 and 2021.

Wisnauskas took on the historic No. 1 jersey this year after Bernhardt exhausted his eligibility at the end of last season. He broke the career points record on a night with Bernhardt and many others from Maryland’s 2017 national championship-winning team in attendance.

“Guys like Jared [Bernhardt] — meeting Matt Rambo, Dylan Maltz, Curtis Corley — a bunch of those guys coming back and seeing them and just like really talking and hitting it off, it’s just, it’s really cool,” Wisnauskas said. “It’s awesome to be a part of, for sure.”

The attacker leads the team in points in his fifth year with the Terps, racking up 30 goals and 25 assists for 55 total points. His stellar play this season earned him a spot on Inside Lacrosse’s Midseason All-American first team.

With Wisnauskas set to exhaust his eligibility at the end of this season, Tillman has made it known how much he appreciates his record-breaking attacker.

“I joke with [Wisnauskas] sometimes like, ‘What am I going to do without you?’” Tillman said. “But I want him to know even now before [he leaves] how much he’s meant to us, how much he means to me … he’s just an awesome guy and you’re thankful for guys like that in your locker room.”