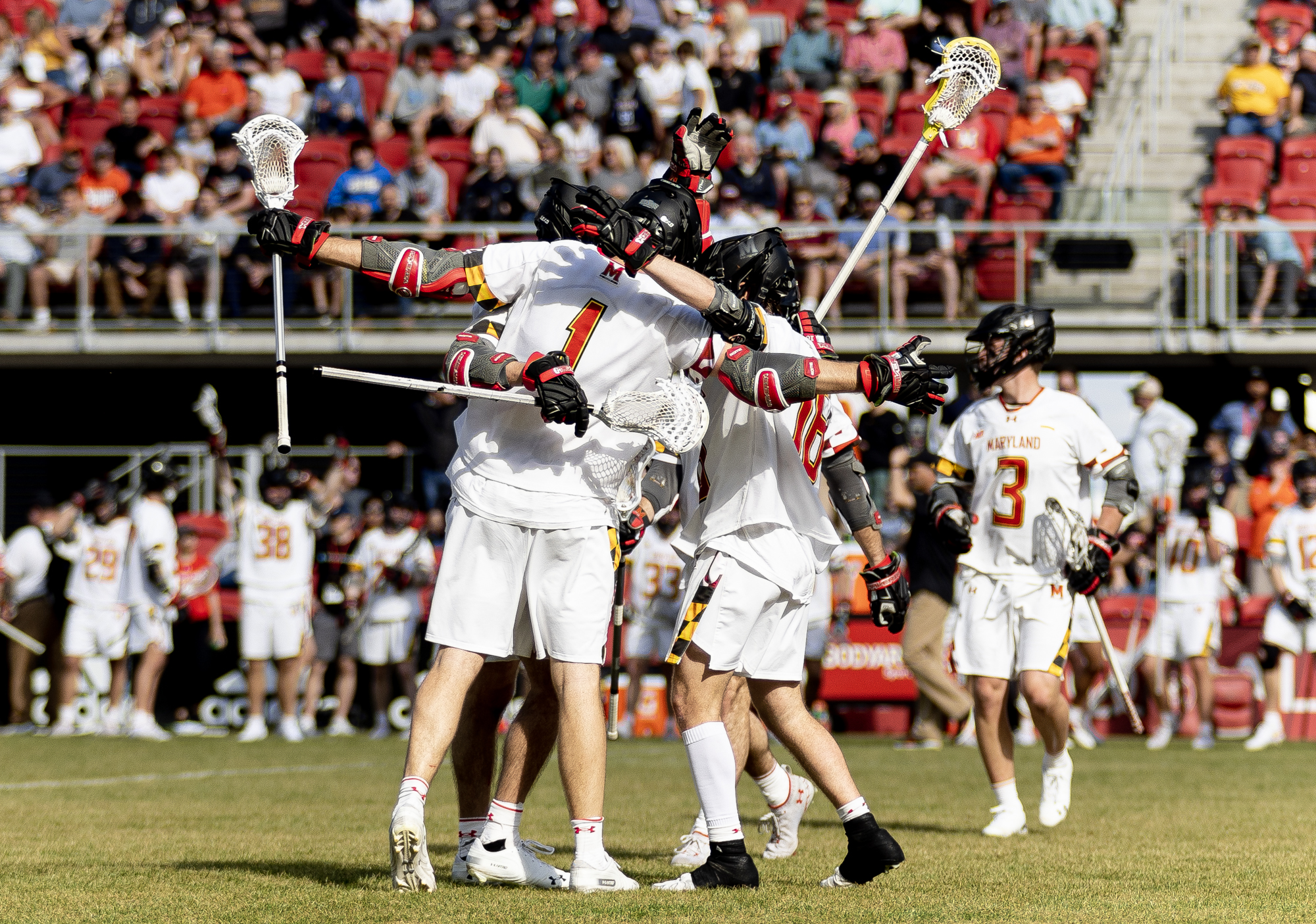 Logan Wisnauskas celebrates with teammates during Maryland men's lacrosse's 23-12 win over No. 2 Virginia at Audi Field on March 19, 2022. (Julia Nikhinson/ The Diamondback)

After a long stretch of games away from its home field, Maryland men’s lacrosse couldn’t be more excited to return to Maryland Stadium.

The Terps will take on No. 4 Rutgers on Sunday in their first Big Ten home game of the season, and their first game back at Maryland Stadium since Feb. 26, when Maryland defeated Princeton, 15-10.

“There’s nothing like playing in Maryland Stadium,” attacker Eric Malever said. “It’s a great atmosphere and it’s so fun playing in front of all the fans, just knowing they have your back. I think everyone’s really excited to finally be home.”

Rutgers is the only team in the country with double-digit wins and holds a 10-1 record, winning its first two conference games by a combined 16 goals.

The Scarlet Knights’ only loss of the season came in a 16-11 defeat against now-No. 3 Princeton.

Maryland’s offense will play a large role in continuing its success, as the Terps currently lead the country in goals per game and assists per game.

However, they’ll have to beat one of the best goalkeepers in the country in Colin Kirst, who was named to Inside Lacrosse’s midseason All-American third team last week.

Maryland will also need to stay strong defensively — Rutgers is currently averaging the third most goals per game in the nation — to continue its historic domination over the Scarlet Knights.

The Terps have only ever suffered one loss to Rutgers, but Tillman praised the experience, toughness and coaching of the Scarlet Knights ahead of the top-five matchup.

[No. 1 Maryland men’s lacrosse strolls to comfortable 20-12 win over Michigan]

While the game will certainly serve as a long-awaited homecoming for the Terps, it could be a historic one as well.

Wisnauskas has notched a point in every game of his career as a Terp, and has averaged 4.36 points per game over five years with Maryland.

Despite being mere points away from history, Wisnauskas and the Terps are solely focused on their preparation for Rutgers.

“Logan is such a humble guy and he’s so focused on the season,” Malever said. “I’m sure he will break [the record] and it’s going to be a great moment for him and for us and for the Maryland lacrosse program. But I think he would say the same, I mean, we’re pretty focused on the game.”