No. 1 Maryland men’s lacrosse strolls to comfortable 20-12 win over Michigan 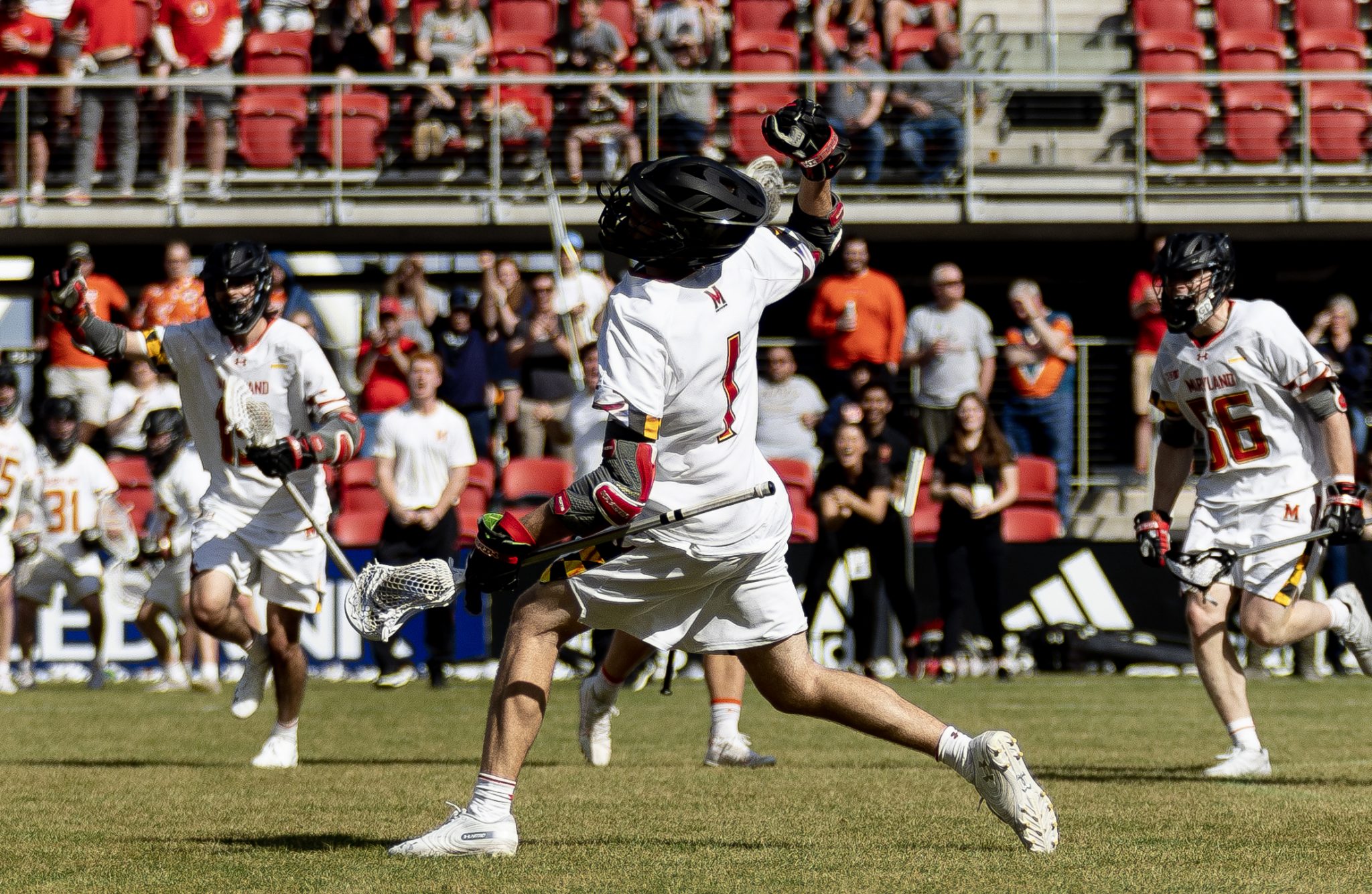 Logan Wisnauskas celebrates during Maryland men's lacrosse's 23-12 win over No. 2 Virginia at Audi Field on March 19, 2022. (Julia Nikhinson/ The Diamondback)

Just 14 seconds later, Geppert found the back of the net again on the cut as the long stick midfielder gave the Terps a perfect start to the second half.

Despite not being Maryland’s cleanest performance of the season, coach John Tillman was happy with the Terps’ effort en route to another Big Ten victory.

“There are things that I think we could have done a lot better today,” Tillman said. “[But] their effort was terrific. I’ll never question the effort. These guys, they played hard.”

The win maintains Maryland’s status as the only undefeated team remaining in the country.

Ryan Cohen began the scoring after he spun past Matt Rahill and beat Logan McNaney with a shot while falling down, giving the Wolverines an early lead.

The Terps responded with a goal from Keegan Khan on a man-up opportunity, but Michigan quickly regained the lead after Josh Zawada found the back of the net.

A rocket of a shot from Roman Puglise in transition and a goal after some nifty footwork from Logan Wisnauskas to get past his defender and to the goal gave Maryland a 3-2 lead after the end of the first quarter.

The Terps began the second quarter with two faceoff wins and two quick goals from Owen Murphy and Wisnauskas.

Issac Aronson’s bouncing shot on the man-up opportunity got past McNaney and cut Maryland’s lead back to two.

But three goals in just over a minute for the Terps got them out to a comfortable lead with just under five minutes left in the half.

Jonathan Donville slipped off of his defender and put a shot between the legs of Carr, before a Wierman goal directly from a faceoff and an Eric Malever wrap-around strike put Maryland up 8-3.

Aronson added his second of the day before Michael Boehm scored on another man-up opportunity to get the Wolverines back within three goals.

Owen Murphy capped off the scoring of the first half with a composed finish, pump-faking at the crease before slotting a shot over Carr to give the Terps a 9-5 lead at halftime.

The Terps started the second half with two instant goals from Geppert, doubling his season total in the span of just 14 seconds.

Tillman thought his two goals were exemplary of Maryland’s success offensively, as the Terps were able to get some quick goals in transition or early into possessions.

“Some of our early offensive stuff was terrific, some of the sub game stuff, some of the stuff off faceoffs,” Tillman said. “I mean [Geppert’s] first two were terrific. We had some other ones where we got quick opportunities, and I thought the guys executed at a high level.”

Ajax Zappitello then made a diving save to prevent Michigan scoring on an open goal after a Maryland turnover in transition, keeping a run of Terps goals alive.

Wisnauskas and Khan scored exactly a minute apart to grow that scoring run to 5-0, giving the Terps a 13-5 lead.

Michigan fought back with three straight goals, but Khan grabbed his hat trick on an assist from Wisnauskas to end Michigan’s run.

Murphy converted on the extra-man opportunity to finish his hat trick before adding another goal to extend Maryland’s lead to eight.

Cohen added his fourth goal of the game to end the third quarter for the Wolverines before Anthony DeMaio spun past his defender and finished past Carr, notching his first goal of the day.

Maryland and Michigan traded goals for the remainder of the final quarter, as two goals from Donville and finish on a cut from Jack Koras canceled out three Michigan goals to give the Terps a 20-12 victory.

Tillman credited his offense’s unselfish nature, with another high-powered offensive performance pushing Maryland to its fifth 20-goal game of the season.