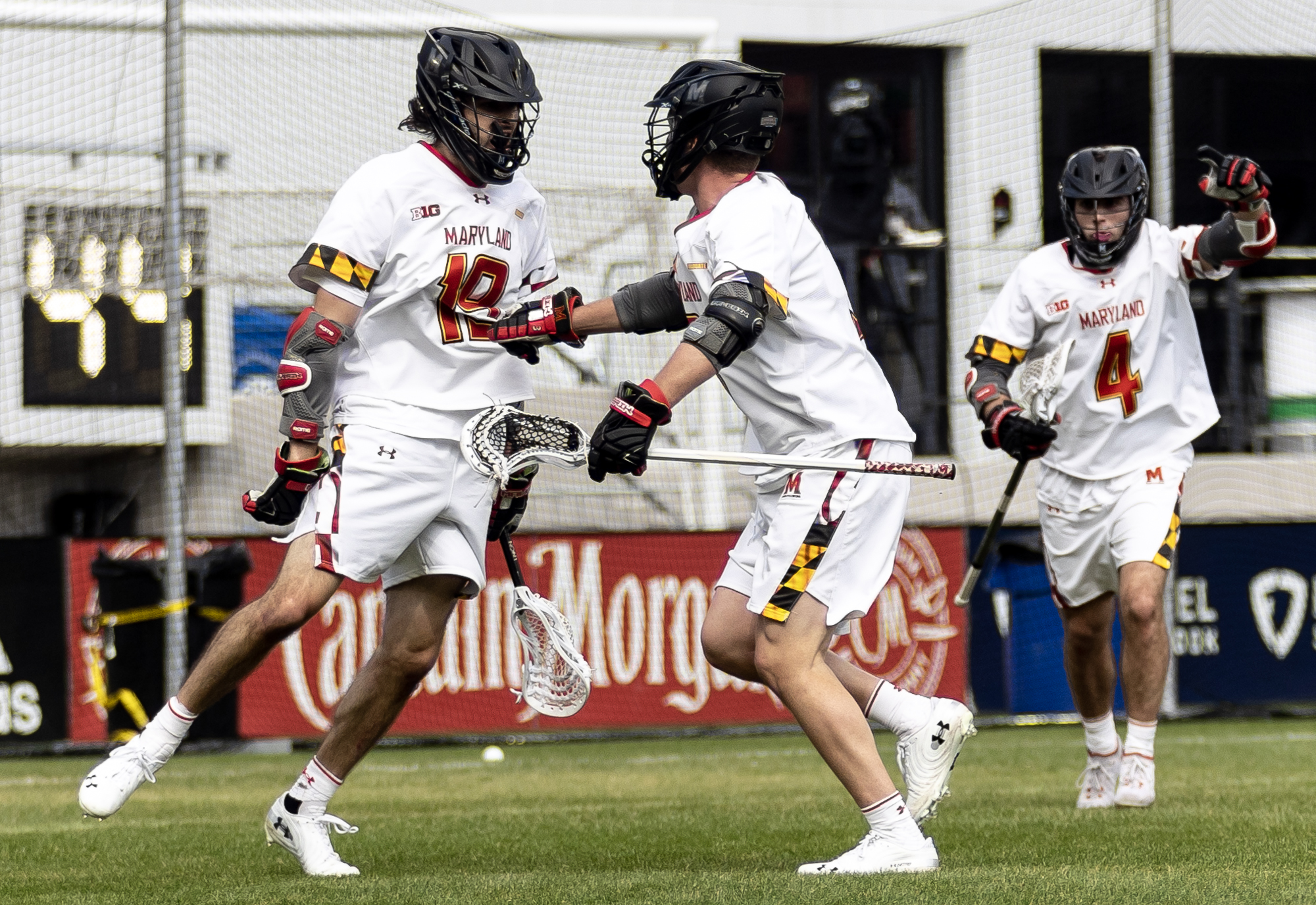 Keegan Khan celebrates during Maryland men's lacrosse's 23-12 win over No. 2 Virginia at Audi Field on March 19, 2022. (Julia Nikhinson/ The Diamondback)

Standing behind the net, Keegan Khan denied a pick before rolling left and wrapping around the goal.

His defender denied the middle field the attacker had used so effectively to score his first two goals of the game, so Khan spun back to the outside and completed his hat trick with a shot that rifled into the back of the net.

Khan was one of three Terps to score a hat trick and 10 goalscorers to contribute to Maryland men’s lacrosse’s 18-7 rout of Penn State Sunday.

The Terps put on an impressive performance all across the field, scoring all 18 goals in the opening three quarters and holding the Nittany Lions scoreless for more than 23 minutes straight during the game.

The assertive victory helped Maryland maintain its position at No. 1 in both the Inside Lacrosse and USILA polls, as well as its status as the only remaining undefeated team in the country.

Penn State kept the game close early on — but goals from Khan and Luke Wierman got Maryland into its offensive groove halfway through the second quarter before the Terps embarked on a 13-0 run that helped them run away with their first Big Ten win of the season.

“They got [our lead] to two and started getting some momentum,” coach John Tillman said. “I thought those two quick ones we got were huge … We just were able to snatch that momentum back, and then kind of kept it going.”

After failing to score in four straight games, Khan has notched a combined eight goals and four assists in Maryland’s last two outings against Virginia and Penn State.

Khan, Eric Malever and Kyle Long all notched hat tricks against the Nittany Lions, despite the trio not always being the focal point of the Terps’ attack during their nonconference schedule.

Maryland’s two leading goal scorers so far this season — Logan Wisnauskas and Jonathan Donville — didn’t score until the second half.

With an array of offensive weapons at his disposal, Tillman expects different players to take the lead and help carry the load on offense on a game-by-game basis.

“Keegan [Khan] all of a sudden, the last couple of games, doing well. For us, that’s hopefully the way it’ll work,” Tillman said. “There’ll be a couple of games where he’ll go get some goals and maybe if they help too much on him, then it’ll open up some things for some other guys.”

After scoring a season-low 11 goals at Notre Dame, the Terps have scored 65 goals in their last three games as they’ve rattled off three straight wins over Albany, Virginia and Penn State.

That tally is the most Maryland has scored over any three-game stretch since 1956, when the Terps scored 66 goals in 24-4, 24-3 and 18-5 wins over Syracuse, Loyola and Washington and Lee, respectively.

[Maryland men’s lacrosse can’t get title game back, but it made a statement against Virginia]

Maryland had a lot of success behind the goal early on against the Nittany Lions, getting defenders hung up before finding teammates cutting to the net or wrapping around and scoring themselves.

Tillman thought his team’s movement and passing was key to the offensive clinic the Terps put on against Penn State.

Jack Koras impressed against the Nittany Lions, scoring a goal nearly identical to his goal against Virginia to open the scoring before adding a second goal later in the game.

The sophomore midfielder has scored in four straight games and has impressed Tillman so far this season.

“Jack Koras has had a great year so far for us,” Tillman said. “He’s really played well. He got an early one for us last week as well.”

Maryland has gotten lots of contributions from depth throughout its historic offensive production over the last three games, with 21 different goalscorers contributing to the Terps’ 65 goals.

Tillman said Maryland’s offensive depth and ability to have different players shine in different games has made it much harder for teams to defend them, and should continue to do so as the Terps dive further into conference play.

“Strategically, it’s a lot harder to kind of figure out, ‘Alright, what are we going to take away?’” Tillman said. “When you take away one guy, then other guys might have a little easier opportunity.”