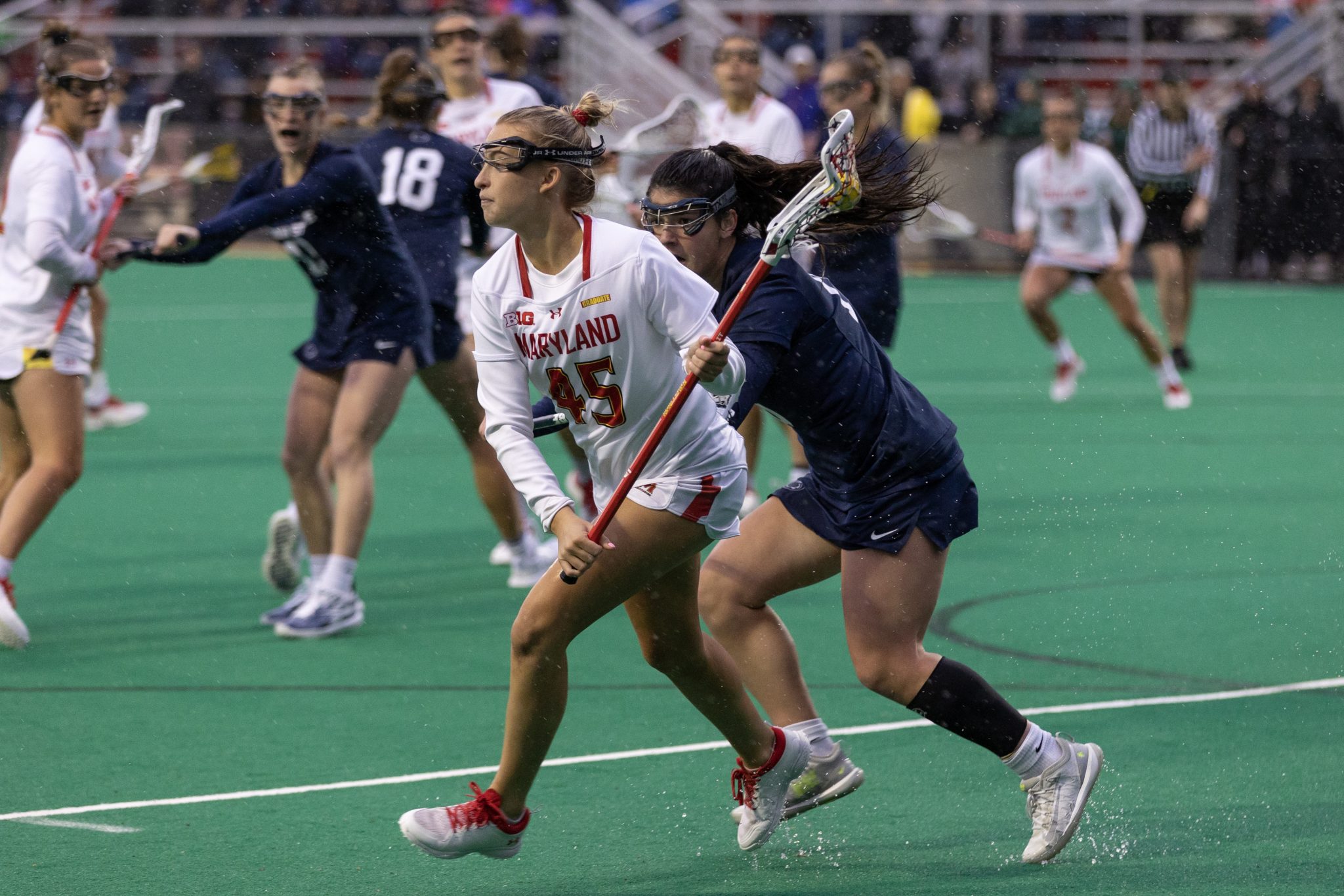 Princeton was all over Aurora Cordingley, but the attacker wasn’t phased by its aggressive defense.

She faked left before darting to the right and towards the goal where a quick bounce-shot met no resistance to put Maryland women’s lacrosse up by two for the first time.

Despite a rocky start where they were down 3-0, the Terps continued their dominance over the Tigers in a 19-9 win with five goals each from Cordingley and Hannah Leubecker.

“We came out a little slow and had to claw our way back,” coach Cathy Reese said. “I’m really proud of how we did that over the course of four quarters.”

Princeton stormed past Maryland’s defense in the opening minutes of the contest, firing the ball past Emily Sterling three times in a row.

But after several attempts, Libby May sailed the ball into Princeton’s cage to jumpstart her team’s momentum.

The Tigers did their research coming into the matchup, stifling the Terps’ typically dominant offense and limiting them to just one goal in the first 14 minutes of the quarter.

After that, Cordingley had enough. With less than 30 seconds left in the quarter, she lobbed the ball to Eloise Clevenger, who fired it past Princeton goalkeeper Sam Fish. Cordingley followed her assist with a swift shot to the back of the net with just a second remaining in the quarter.

“We just trust the process and we trust each other,” Cordingley said. “That’s what makes us so dangerous even when we are down by a couple of goals because we’re always able to come back.”

Similar to the opening quarter, the Tigers made the first move in the second. They won the draw control and raced down the field for a score.

However, the Terps didn’t make the same mistakes in the second quarter. They found their rhythm and their first lead of the game quickly with goals from Leubecker and Clevenger.

Princeton tied the game at five with a free-position goal, but Maryland instantly responded. Scores from May and Cordingley gave the Terps their first multi-goal lead of the game.

The Tigers’ defense that plagued the Terps in the first quarter couldn’t hold them back in the second. Maryland found the back of the net in more than 50 percent of its shots.

The real area of improvement in the second quarter was the Terps’ defense. Emily Sterling had three saves and the team’s defenders learned how to push back against Princeton attackers and keep them away from the net.

The combination put Maryland ahead, 9-5, midway through the contest.

Leubecker started the second half strong for the Terps, charging down the field and whipping the ball past Fish before anyone could stop her, giving herself a hat trick.

But Princeton’s Kate Mulham responded, completing a hat trick of her own off a draw-control win. Cordingley followed with her third goal of the game, only for Mulham to score once again, decreasing Maryland’s lead to 11-7.

Cordingley and Mulham kept the back-and-forth going, each reaching five goals for the match before the end of the third quarter.

An additional score from Victoria Hensh and Mulham’s final goal of the game left the score 14-9 at the end of the third.

Overall, Sterling was the deciding factor, staying steady with 10 saves against the Tigers.

Sterling and the backline held Princeton scoreless in the final quarter allowing for a decisive end to what began as a close game.

After her first game of the season without a goal against Penn State on April 7, Leubecker came back with a vengeance against the Tigers. She tallied her fourth and fifth goals in the fourth quarter, putting the Terps up, 16-9.

“It was just a matter of going hard, beating my [defender] and then finishing my shot,” Leubecker said

Maryland didn’t slow down in the final minutes of the game, showing off its dominant offense with goals from Grace Griffin, Clevenger and May to end the game, 19-9.