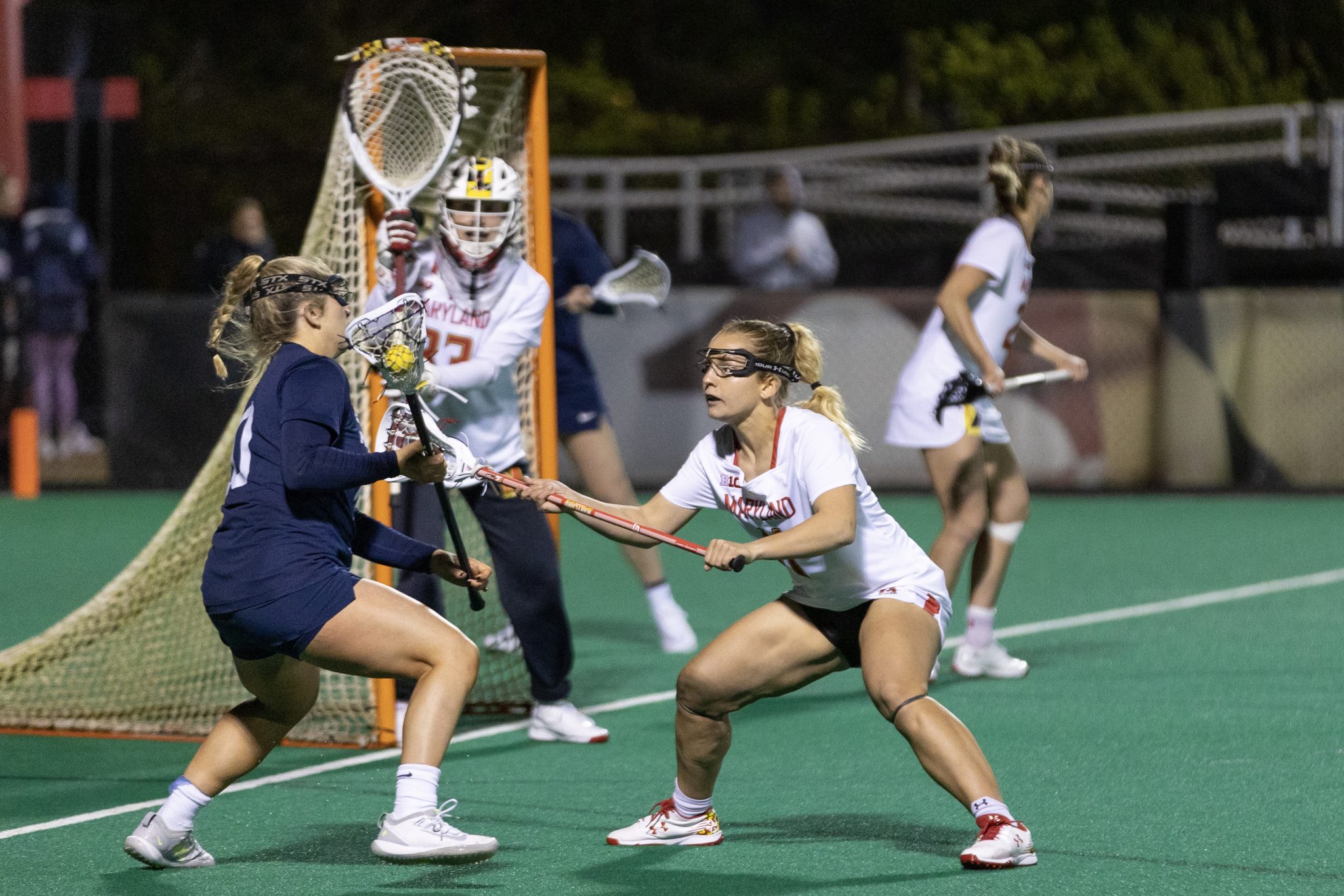 Early in the fourth quarter, Penn State looked to make a statement goal on a free-position shot in a four-point hole. Brooke Hoss led the Nittany Lions’ attack, charging the goal and launching the ball toward the back of the net.

But Maryland women’s lacrosse goalkeeper Emily Sterling and her stick were ready to make a save. She swept the ball out of the way in one of her 13 saves against the Nittany Lions.

After losing five Big Ten bouts last year, Maryland has continued to prove it is still one of the top programs in the conference. The Terps overpowered Penn State in a defensive battle to continue their conference play undefeated at 3-0.“I thought our timing was good defensively, and that in turn put their shooters in position for Emily to make saves,” coach Cathy Reese said. “We had some really nice defensive possession sequences.”

Maryland has held opponents to single-digit goals in nine of its 12 games this season. In all three matchups against conference opponents, the Terps have limited their Big Ten foes to only six goals each.

Sterling led Maryland’s impressive defensive performance against Penn State. After tallying a season-high 12 saves against Johns Hopkins on April 2, the goalkeeper kept the momentum going and broke her career record with 13 saves against the Nittany Lions.

“I think it’s just having confidence in my training,” Sterling said. “That’s something we’ve really tried to emphasize, like, realize how much like work that we put in.”For the past week, the junior has led the nation in save percentage and has only improved, boosting her percentage to 56 percent after Thursday’s game.

Sterling’s stellar performance in goal was backed up by Maryland’s efficient all-around defense. Heading into Thursday’s game, Reese wanted her team to stay consistent on defense and work cohesively against Penn State attackers after losing to them twice last year.

The Terps produced against the Nittany Lions, causing 11 turnovers, their highest against a Big Ten opponent. They stayed strong against an assertive Penn State offense with great defensive timing, Reese said.

[With Penn State matchup ahead, Maryland women’s lacrosse is sticking to the script]

And Maryland wasn’t the only team with a formidable goalkeeper.

Penn State goalkeeper Ashley Bowan also recorded 13 saves in Thursday’s battle of the goalkeepers. But Bowan came out with a lower save percentage than Sterling at 50 percent compared to Sterling’s 68 percent.

“My goal is to never let the ball in,” Sterling said. “Whether that’s me making a save or our defense coming up with a loose groundball or caused turnover, that’s our goal every time.”

Sterling has stood out all season with four games with 10 or more saves, six games with a save percentage of 62.5 percent or higher and seven games where she was in the cage for the full 60 minutes.

With just four games left in the season —  two of which come against ranked opponents — Maryland hopes to continue its defensive dominance to finish stronger than it did last year. “I think it’s been great,” co-captain Grace Griffin said. “We’ve been taking every game, game-by-game and I think that’s why it’s crazy how fast [the season’s] gone by.”