With Penn State matchup ahead, Maryland women’s lacrosse is sticking to the script 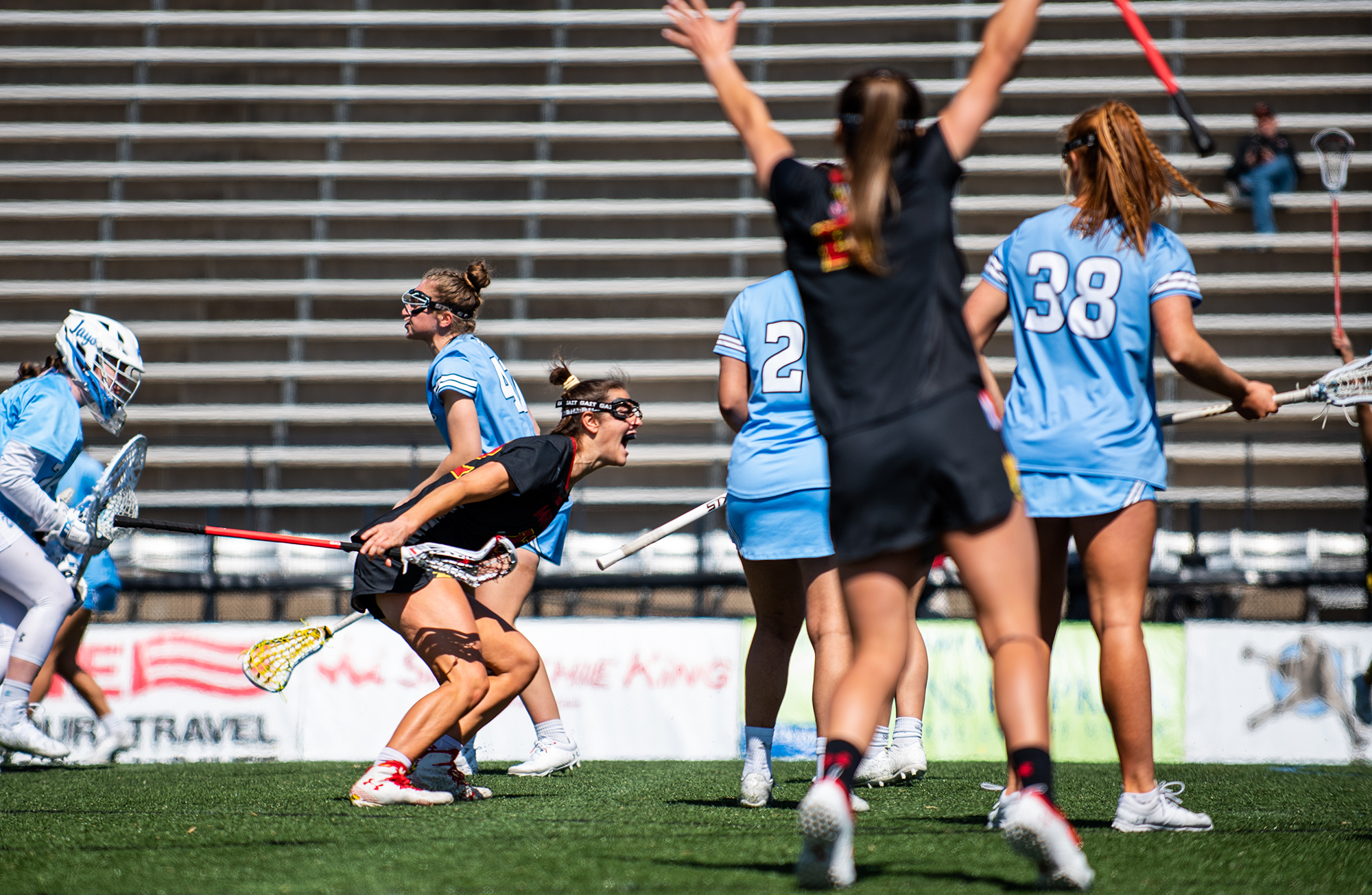 Down by three, Johns Hopkins was pushing against Maryland women’s lacrosse’s defense, looking for an opportunity to strike. Georgie Gorelick lobbed the ball to her teammate, but Grace Griffin intercepted her pass and scooped up the ball in her first of two caused turnovers in the game.

The Terps had nine caused turnovers against the Blue Jays, on par with their average of 9.8 per game. The team has been focusing on regaining possession all season and it isn’t stopping soon.

“When we trust each other, then we all play at our best,” co-captain Griffin said. “We’re not thinking, we’re not second-guessing anything.”

Maryland has had a simple recipe for success this season: Focus on itself, and the rest will come with it. And the Terps aren’t switching up the game plan with their upcoming matchup against Penn State.

Maryland dropped both of its games against the Nittany Lions in the 2021 season. And while coach Cathy Reese’s squad remembers the feeling of losing, the team is just focused on playing the game ahead.

“We’re looking forward to the chance to play them,” Reese said. “Not just because we lost, but because it’s the next game on our schedule and it’s for us, where we are at this point in the year.”

Taking a game-by-game approach to the season is part of Maryland’s strategy for coming out on top, and it’s been working for the Terps all season.

No matter the game, the team’s plan is to focus on winning draw controls, keep its shooting percentage above 50 percent and defend hard when its opponents get possession.

“Overall, the things that we talk about on a daily basis don’t change because at the end of the day, it’s about Maryland,” Reese said.

For Reese, one of the key components is redefending — when attackers are the ones playing defense after they lose possession of the ball and try to prevent their opponents from clearing.

This is an area where the Terps have shined with nine caused turnovers each for Griffin,  Aurora Cordingley and Shannon Smith.

On defense, having a clear game plan and trusting each other to follow it has been crucial after the exit of Torie Barretta in the game against Georgetown March 30.

The Terps have stayed successful, only allowing six goals against Johns Hopkins. But Penn State will be a new challenge as the team has the least amount of turnovers in the Big Ten.

“We know what we can do. We’ve seen it in practice throughout the week,” Emily Sterling said. “Just staying true to our game plan and trusting each other and moving as one unit will be the key to our success tomorrow.”

Sterling, who leads the nation in save percentage at 54.4 percent, credits her success in the cage to Maryland’s defenders forcing their opponents to make shots she can easily save, something they focus on in practice every day.

In the Penn State battle, the defense needs to work as one unit and make it as difficult as possible for the Nittany Lions to score.

“We’ve learned as we’ve gone through the season, we’ve tightened up on [our defense] and that’s no different going into Thursday night,” Reese said.