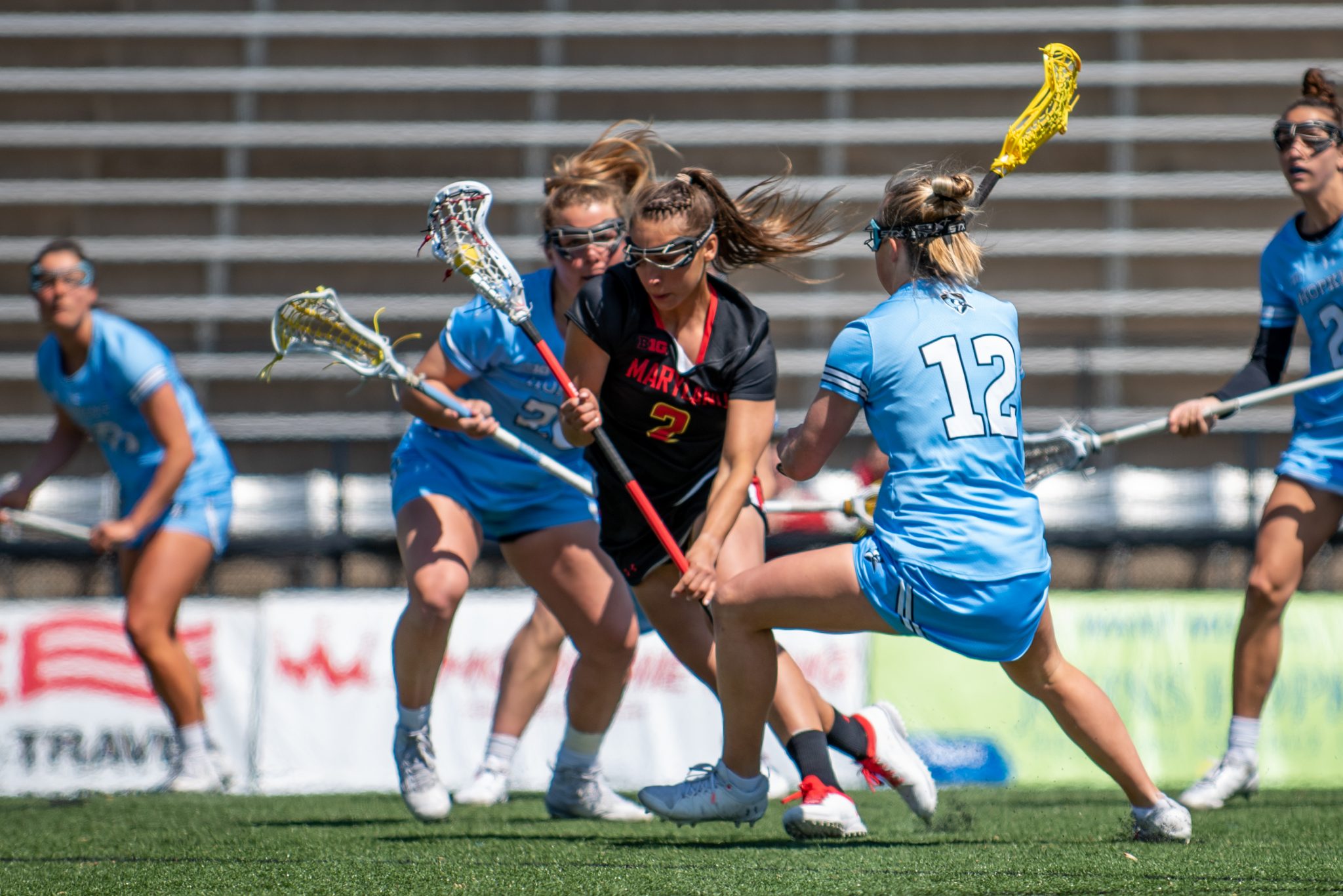 Libby May was charging down the field and preparing to shoot, hoping to build on Maryland women’s lacrosse’s 9-6 lead in the third quarter. Johns Hopkins’ goalkeeper blocked her shot, letting the ball fall to the ground.

Freshman Jordyn Lipkin saw her opportunity and dove for the loose ball and fired it into the bottom of the cage while she rolled to the ground.

After only beating their in-state rivals by one point in each of their three 2021 matchups, the Terps delivered a commanding performance.

Bolstered by 10 different goal scorers, Maryland won its second conference game of the season, 17-6, against the Blue Jays.

“We’ve got some really awesome… people and leaders,” coach Cathy Reese said. “I’m 100 percent confident in them and their ability to take this team wherever it wants to go.”

Johns Hopkins scored the opening goal of the Big Ten matchup, but Maryland didn’t allow that to slide.

Shannon Smith rebounded with her team’s first goal of the game after the Blue Jays’ goalkeeper blocked her first shot. Smith’s goal was followed by two more in less than four minutes for the Terps courtesy of Libby May and Eloise Clevenger.

After Maryland’s scoring spree, the action cooled down in the first and gave way to a fierce back-and-forth between the conference rivals. Both teams had opportunities to score, but couldn’t get their shots past the dueling goalkeepers.

The Blue Jays’ Kathleen Garvey had four saves in the first to Emily Sterling’s three.

Scoring exploded in the last 90 seconds of the quarter. Smith fired in her second goal of the game and May followed with a goal on a fake-out shot with less than 20 seconds left.

“I think something that’s so special about our offense this year is that we’re so versatile, everybody can score,” May said.

Johns Hopkins closed out the quarter with its second goal of the game, which found the back of the net with one second remaining. An exciting final stretch set the score 5-2 going into the second.

Maryland was ready for more to start the second quarter. Hannah Leubecker moved in quickly to score her first goal of the day on a free-position shot.

The Blue Jays responded quickly, winning the next draw control and firing the ball past Sterling to decrease the Terps’ lead to three goals.

Clevenger snuck up from behind the cage and launched the ball in to tally her second goal of the matchup. Just over 30 seconds later, Shaylan Ahearn lobbed the ball in after winning the draw control.

Johns Hopkins came back and scored two goals of its own to put the score at 8-5. The in-state opponent took advantage of Maryland’s 11 fouls and nine turnovers in the first half.

The Terps put their foot on the gas to start the third quarter with a goal from May just 30 seconds into second-half play. But they couldn’t add to their lead after that opening goal. The Blue Jays stayed disciplined on defense, limiting Maryland’s offensive opportunities to score.

Johns Hopkins kept fighting back against the Terps’ lead, scoring their first goal of the second half to decrease the lead to three again at 9-6.

Goals from Aurora Cordingley and Jordyn Lipkin closed out the third quarter with Maryland pushing to a give-goal advantage. Cordingley had seen limited opportunities early in the game with aggressive defense from her former team, but she finally found the back of the net on a free-position shot.

Cordingley struck again in the opening minutes of the fourth quarter with a bounce shot during another free-position attempt to give her team its largest lead of the day, 12-6.

Goals from Leubecker and May cemented the Terps’ lead at 14-6. The team found its rhythm in the last quarter with zero fouls and a 66.7 percent shooting percentage.

Sterling shut out the Blue Jays in the final fifteen minutes, finishing with a season-high 12 saves.

“They’re going to get shots and our job is to force them to those bad angle shots and [Sterling] came up with every single save,” defender Abby Bosco said.

Victoria Hensh, Grace Griffin, and Bosco all added to the fourth-quarter scoring spree to close out the game with a convincing victory, 17-6.