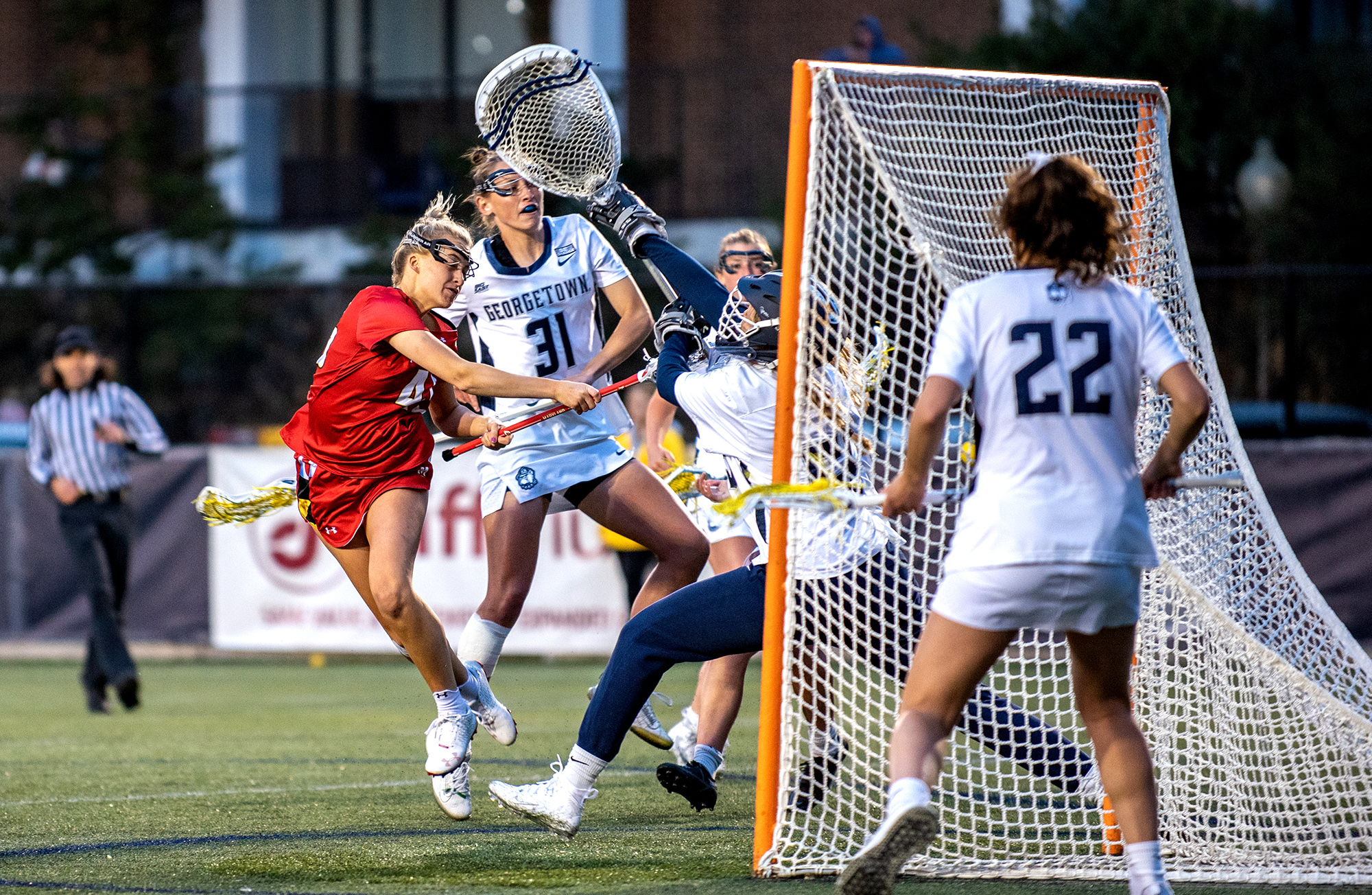 Aurora Cordingley takes a shot from in front of the net during Maryland women's lacrosse's 15-3 win over Georgetown on March 30, 2022. (Joe Ryan/The Diamondback)

Maryland women’s lacrosse was going on a scoring spree. The team had already fired in four goals in the third quarter when Aurora Cordingley saw her opportunity to add to her team’s lead.

She dashed around the back of the net and launched the ball between opposing players and down into the net to record her eighth point of the game.

Maryland played four games in 11 days and it’s not slowing down anytime soon with more Big Ten matchups coming its way in the coming week.

After their first loss of the season, the No. 8 Terps had just two days of practice to recover and reassess before their midweek game against Georgetown.

They came back ready to produce an electrifying 15-3 win, led by Cordingley, who notched her 250th career point in the game with five goals and three assists. This was the fourth time this season the graduate attacker has tallied eight or more points in a game.

The Terps scored the first goal of both halves and prevented the Hoyas from scoring in both the first and third quarters.

“We came ready to play,” coach Cathy Reese said. “[I’m] pleased with where we are and proud of how we rebounded from where we were.”

Maryland showed improvement in crucial offensive areas, with more assists than its games against Penn and James Madison and its best shooting percentage of the season — with 60 percent of its shots finding the net.

After rushing on possessions during the matchup with James Madison, Reese was pleased with her team’s improved shooting percentage. She attributed its improvement to practicing patience on offense and taking the time to find the best moments to move in and score.

The Terps also performed better during free-position opportunities against Georgetown, converting on two of their four opportunities, compared to their one-for-eight performance against the Dukes.

Defensively, the team worked as a cohesive unit and limited the Hoyas to only nine shots on goal, their lowest of the season.

“I think that it’s always been there,” Maddie Sanchez said of the team’s strong defensive showing. “We stuck to the game plan, we worked together as a unit and I think that was really just the biggest thing for us this game.”

Maryland will need to replicate its success on Saturday when it will face its star players’ former team, No. 20 Johns Hopkins.

Despite the familiarity, Cordingley — who spent four seasons with the Blue Jays — isn’t treating the game any differently. While she knows some of their tactics and tendencies, the team has changed since last year, with eight freshmen joining the ranks.

“It’ll be exciting to kind of see just how they’ve changed as offenses and defenses,” she said. “I’m excited to see my friends, but [I’m] treating it like any other game.”

Battling against Johns Hopkins promises to be a more competitive matchup. Saturday’s game will be the Terps’ second conference game of the season and their fifth competition against a ranked team.

The Blue Jays lead the Big Ten in ground balls with 199 and caused turnovers with 106, two areas Maryland uses to come up with possessions and stay dominant.

But Reese is confident her team can continue to be successful after its win got them back on track.

“We did a really good job and it helped set us up to get ready for Big Ten play,” she said. “This game is really just kind of laying the groundwork and setting us up to be ready to play Saturday.”