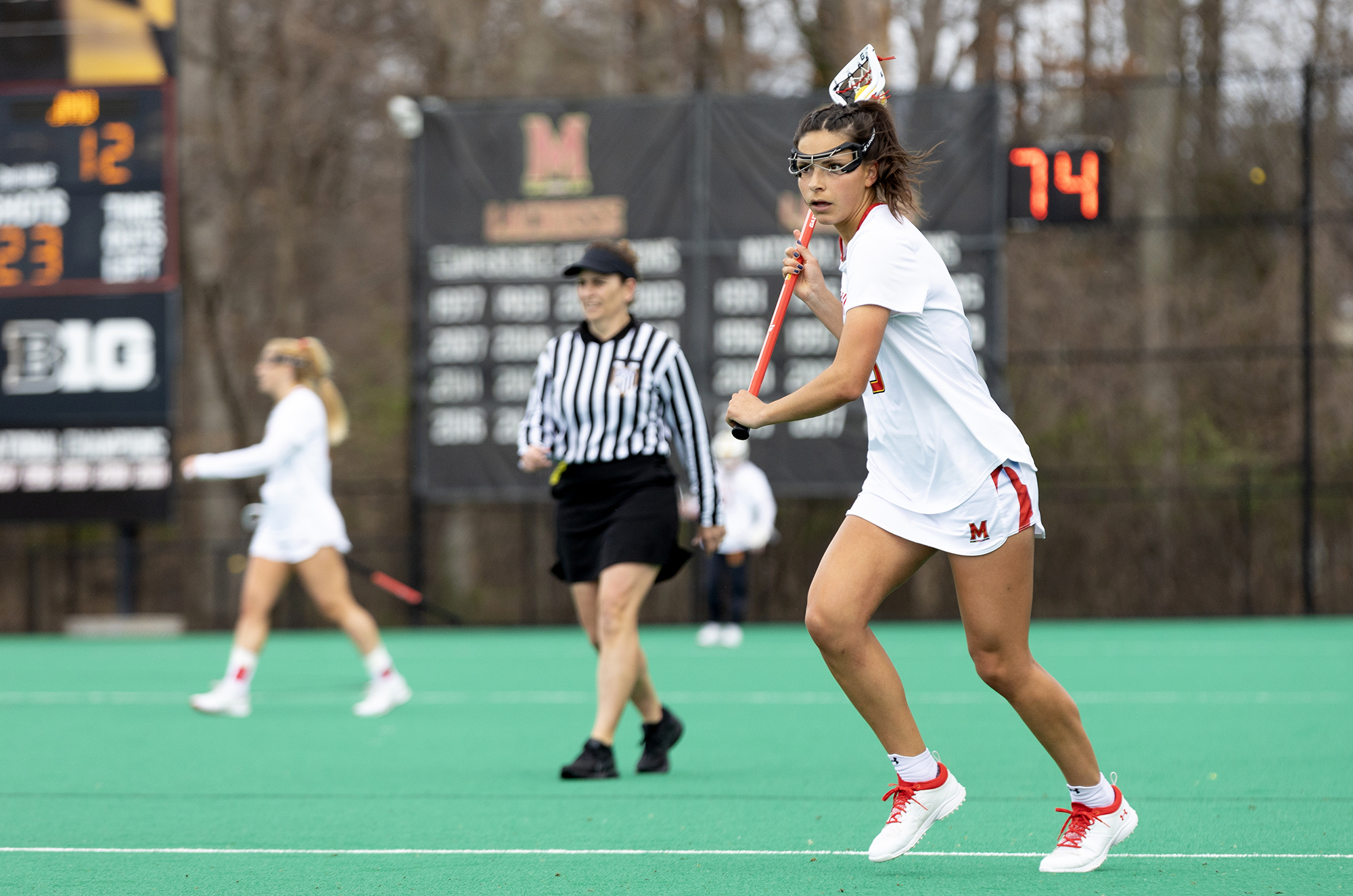 In the fourth quarter of Maryland women’s lacrosse’s loss against James Madison, the Terps were down by four and desperate to score when they were awarded a free-position shot.

Aurora Cordingley was ambushed by the Dukes’ defense, but she fired the ball into the cage to score Maryland’s only goal of the day off of a free-position.

Cordingley’s goal wasn’t enough. The Terps lost 13-8, partially due to their inability to make their free-position opportunities count.

Maryland stayed busy over spring break with three games in six days. The team triumphed in their first two matchups against Rutgers and Penn, but in their third game of the week, James Madison handed the Terps their first loss of the season.

No. 3 Maryland is 8-1 at just over the halfway point of the season. After its first loss and a less than stellar performance against the Quakers — where the Terps gave up more than 10 goals for the second time this season — the team hopes to improve on the “little things” in hopes of rebounding.

“If we execute those little things like eight meters, draw controls, limiting turnovers … I think we’ll be able to take care of business,” attacker Libby May said.

In their loss, the Terps scored fewer than half of their average goals per game and had their lowest shooting clip of the year at 34.8 percent.

Shooting is one of the key areas coach Cathy Reese hopes to improve on before her team’s next match. She particularly wants the team to perform better during free-position shots where they were 1-for-8 against James Madison.

“[Free-position shots] can even be the determining factor in a game,” Reese said. “It needs to be an area that we get better in.”

The team needs to improve its confidence to perform better during free-position opportunities, May said. When they miss shots, the Terps say they need to cheer each other on to build up their confidence.

But it’s not just shooting Reese wants to improve upon — she wants her squad to improve on “everything” before their game against Georgetown on Wednesday.

After two consecutive games where Maryland wasn’t playing its best lacrosse, the team is looking to hit reset and play better on both offense and defense.

“We’re at a point with our first loss of the season … where it gives you an opportunity to just kind of self assess and reassess some things,” Reese said. “Let’s see what we’re doing, let’s see where we need to go to get better.”

Maryland had a season-high 17 turnovers against Penn followed by 11 against the Dukes, which gave its opponents ample scoring opportunities.

The team also struggled to gain possession of the ball on Saturday as they were below their season average on both draw controls and caused turnovers — with just 12 wins in the circle and nine caused turnovers.

“I just think we need to be better at executing what we set out to do,” Reese said.

After its busy spring break schedule, Maryland won’t have much time to completely recuperate. The team will play two games this week, one on Wednesday against Georgetown and their second conference game of the season on Saturday at Johns Hopkins.

But the Terps are confident that they’ll succeed.

“It’s motivation now,” Torie Barretta said. “We have one [loss], we don’t want another. We know this feeling, we’re gonna come back stronger.”