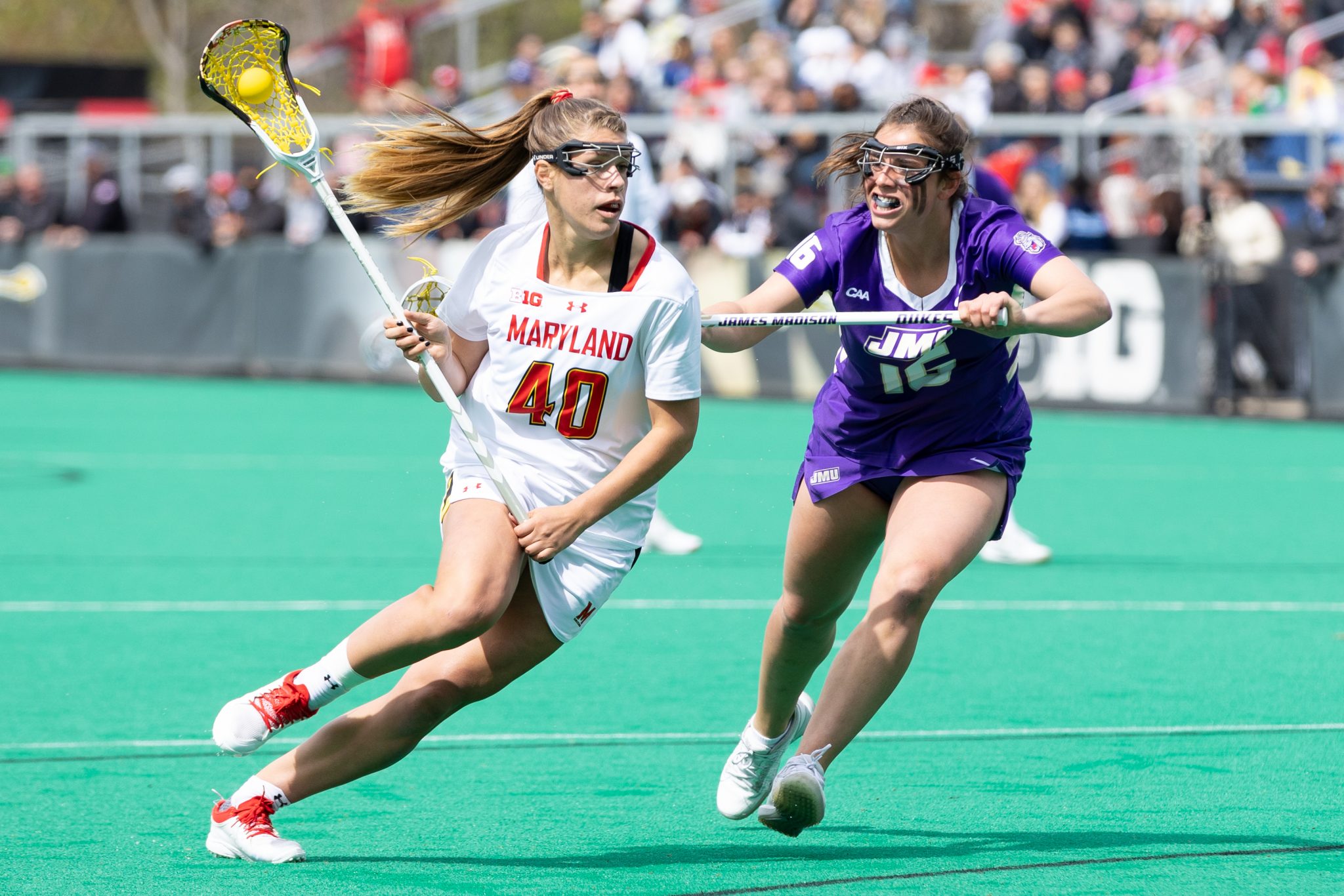 At the end of the first half, Maryland women’s lacrosse had one second added back to the clock and a free-position opportunity. If the Terps managed to convert the shot, the team would go into halftime with a 7-6 lead.

The ensuing rocket from Hannah Leubecker missed the cage by a long shot and Maryland went into halftime tied, 6-6. For the rest of the match, the Terps would be chasing No. 15 James Madison.

In its first loss of the season, Maryland women’s lacrosse was outmaneuvered and outplayed by a fierce Dukes squad who took advantage of their opponent’s mistakes to come out on top against the No. 3 Terps, 13-8.

“I think losses really teach you something,” Libby May said.

But the Terps weren’t going to let that slide, May put Maryland on the board with an assist from Aurora Cordingley. May then delivered a ball to Shaylan Ahearn for the second goal of the game.

The Dukes hadn’t let up yet. They threw the Terps off their rhythm, matching Maryland’s aggression in the midfield and preventing coach Cathy Reese’s squad from getting good looks.

James Madison was able to quickly move through the midfield and go on a 3-0 scoring run, giving it a 4-2 lead in the first quarter. The Dukes’ pressure led to the Terps making simple mistakes on both ends of the field.

Maryland was struggling to make its mark early on — an unusual occurrence for a typically dominant team — only making two of its five shots.

However, Leubecker gave her team the boost it needed by scoring with less than 90 seconds left on the clock in the first quarter. The goal didn’t change the unlikely fact that Maryland trailed at the end of the opening quarter for the first time this season, 4-3.

Leubecker once again gave the Terps a jumpstart, this time with two consecutive goals in the second quarter, pushing Maryland to a lead at 5-4.

The second quarter was ruled by fierce back-and-forth action and aggressive plays in the midfield that minimized chances for scoring. But the Dukes found an opportunity and tied the game on a free-position shot.

The Terps fought their way into the lead with another goal from May assisted by Cordingley. Their lead only lasted for a few minutes as James Madison once again leveled the score.

By the end of the first half, the two sides were tied not just in score but in draw controls and saves.

James Madison far surpassed Maryland with 17 fouls in the first 30 minutes. These fouls presented the Terps with three free-position attempts that could have given them the scoring momentum they desperately needed, but Maryland’s offense couldn’t work its usual scoring magic.

“When you’re put on the line we got to make it count and that’s something that we need to do a better job at,” Reese said.

The Dukes were the first to score in the second half as well, this time scoring two in a row, providing them with an 8-6 lead.

The Terps still couldn’t find their footing. They couldn’t make an impact in both the draw circle and the midfield and missed another key opportunity to score during a free-position shot.

May gave Maryland its first goal of the second half with just 17 seconds left in the third quarter, ending a more than 20-minute scoring drought for her team.

The fourth quarter wasn’t looking any better for the Terps.

But James Madison wanted its four-goal lead back — and got it — firing the ball past goalkeeper Emily Sterling to make it a 12-8 game.

The Dukes refused to take their foot off the gas in the closing minutes, scoring one last goal to make the final score 13-8.

The Terps got their first mark in the loss column after eight straight victories to begin the season.