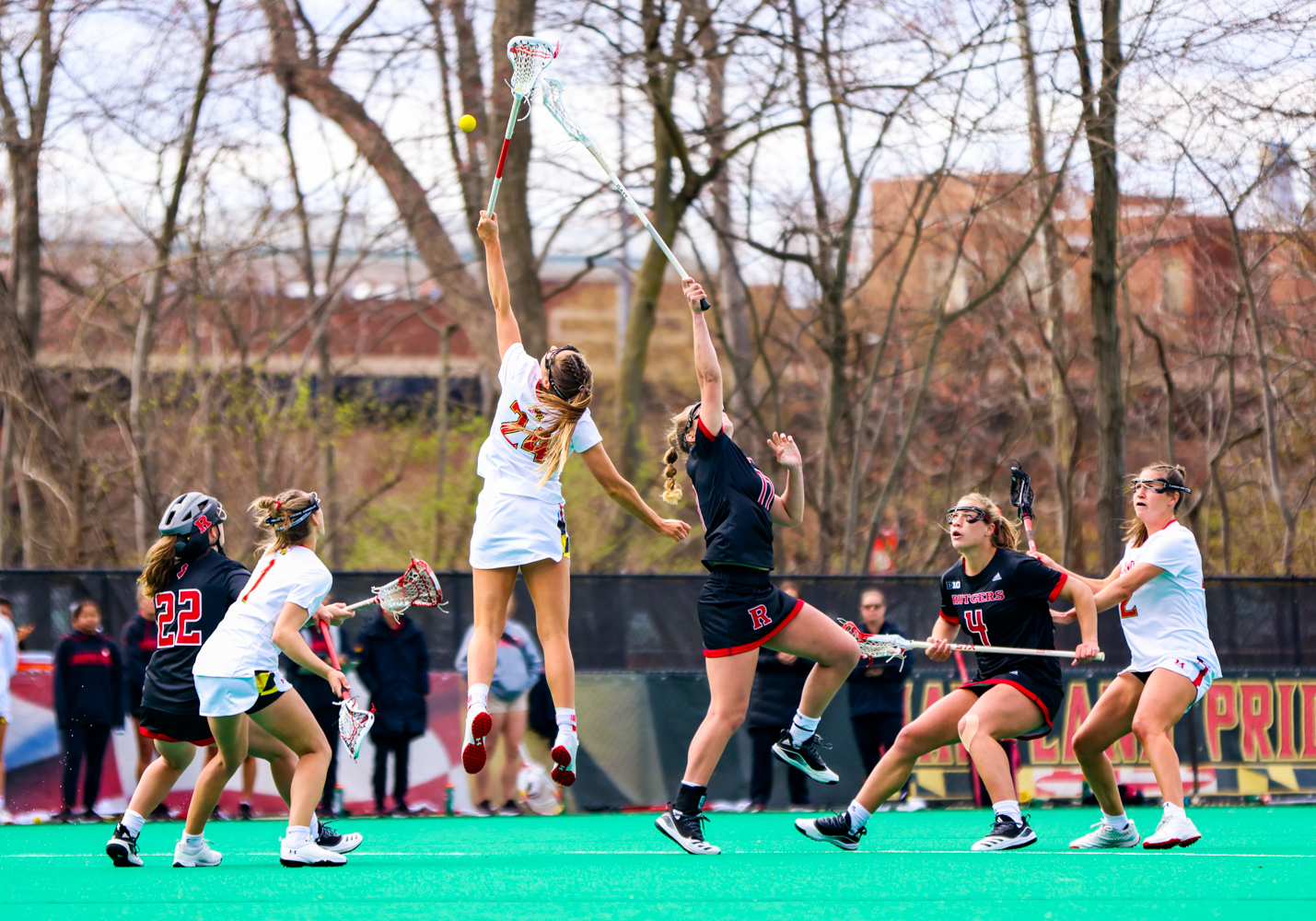 Maryland women’s lacrosse was looking to assert its dominance in the second quarter with an opportunity to score on a free-position shot.

Hannah Leubecker made her move, charging the goal and launching the ball into the net to put the Terps up 6-2. Leubecker was a key piece in her team’s win against Rutgers with four goals and two assists.

After a series of dominant wins, No. 4 Maryland faced a new test in their first Big Ten matchup of the season against No. 12 Rutgers. But despite the challenge that the Scarlet Knights posed, the Terps proved their on-field dominance with a 16-6 win to continue their undefeated season.

“I think we had a lot of ups and downs, overcame some obstacles, but really huge to come out with a win at home against our first conference opponent,” coach Cathy Reese said.

For the first time this season, Maryland didn’t score the first goal of the game. The Scarlet Knights pushed past the Terps’ defense to take an early 1-0 lead.

But Maryland wouldn’t be kept down for long. The Terps fired back with two Aurora Cordingley goals with assists from Leubecker. The Terps continued their 4-0 scoring run with goals from Libby May and Leubecker.

The team limited Rutgers’ offense after their first goal with an aggressive woman-to-woman defense that forced groundballs and turnovers. However, the Scarlet Knights also proved to be strong on defense, holding the Terps to four goals in the first, their lowest after the first 15 minutes this season.

Leubecker opened up scoring in the second quarter by firing the ball past the goalkeeper on a free-position shot. Rutgers came back to score their second of the game, only for Leubecker to earn a hat trick on another free-position shot, putting the score at 6-2.

Both teams were playing assertive defense, but the Scarlet Knights ran into foul trouble in the second quarter, racking up 1o fouls.

“Our main thing was just being able to keep our cool during that time,” goalkeeper Emily Sterling said. “Just being able to maintain our composure and stick to our game plan…I think was huge for us.”

It was a foul on Maryland, however, that gave Rutgers the opportunity to score a free-position shot. The Scarlet Knights’ Cassidy Spilis trimmed the Terps’ lead to three in what her team hoped to be a momentum shift in the game.

But Grace Griffin put a stop to that h0pe with a speedy goal to the bottom of the net. The Maryland co-captain followed her goal by staying disruptive on defense, preventing Rutgers from scoring one last time and ending the half at 7-3.

It was Rutgers that made their move first as the second half commenced, converting on two free-position shots to bring the game within two goals.

The Scarlet Knights gave the Terps trouble in the draw circle, winning 8-4 in the first half and dominating in the third quarter, 5-1.

The Terps re-established their dominance when Cordingley lobbed the ball to Jordyn Lipkin who whipped it into the net. It was followed by Leubecker’s fourth goal of the day after the attacker won the draw control and rushed to the cage. Their scoring run continued with a goal from Lipkin on a free-position shot.

“Just being able to execute, staying disciplined, not getting frustrated, I think that’s one of the biggest lessons we’ve learned this season,” Leubecker said.

Maryland won the opening draw control in the fourth quarter, but it didn’t help. Rutgers stalled the Terps’ offense and proceeded to score the first goal of the period.

Freshman Lipkin and fifth-year Cordingley both earned hat tricks in the closing minutes of the game, finishing the game strong at 16-6.