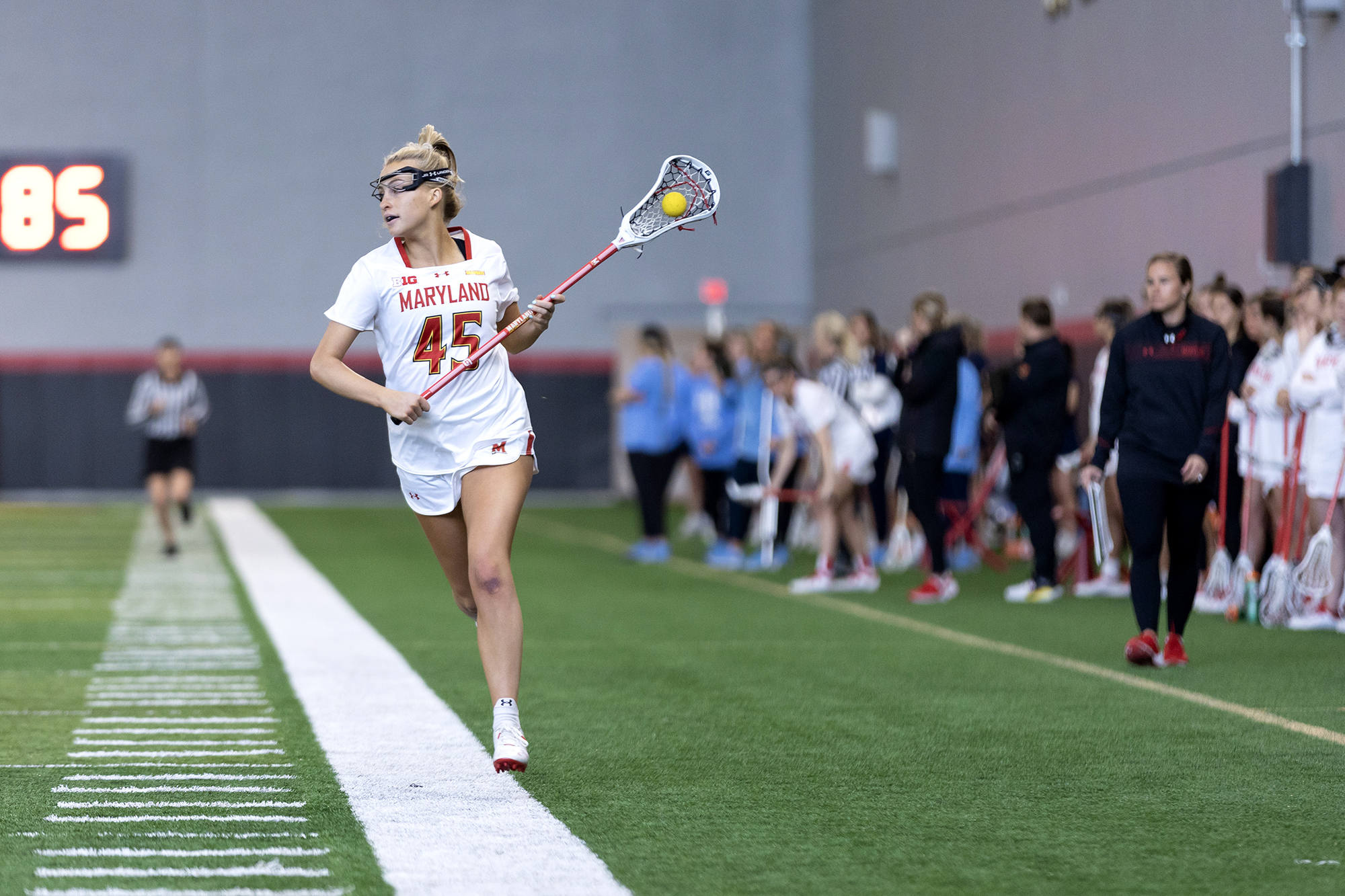 Near the end of the third quarter, Maryland women’s lacrosse was a woman down after Grace Griffin received a yellow card. The Terps were up 12-6, but hadn’t scored in nearly 10 minutes.

With less than 15 seconds left in the quarter, Libby May charged the goal and received a pass from Aurora Cordingley before launching the ball into the net. Despite being down a player, the Terps managed to regain momentum and take back control of the game.

First, Maryland’s game against Villanova was moved from Saturday to Sunday. Then it was moved indoors to Jones-Hill House with limited fans. But the Terps weren’t phased by any of the changes thrown their way, coming out on top with a 19-7 win.

With the field at the Field Hockey and Lacrosse Complex still frozen with snow and cold temperatures from the weekend, the game was moved to a field Maryland has not even practiced on.

But coach Cathy Reese and her team were happy they even had the opportunity to play.

While they were the host team, the Terps were in unfamiliar territory. The lacrosse complex has astroturf, while the field inside the Jones-Hill House does not.

The team also usually plays its home games on one of the smallest regulation fields allowed in college lacrosse, but the indoor field was much larger. While it posed another unique challenge, Reese said the team faces the issue of unfamiliar fields when it plays away games.

“It was nonetheless a home game,” Reese said. “I love Maryland flags being represented all over the place, love the Maryland Terrapins on the wall.”

With Ahearn out for most of the game, Villanova was able to win the draw control 17-12 in Sunday’s match. This was the first time this season Maryland hadn’t dominated the draw control.

Without its typical draw control dominance, Maryland was playing defense first and had to come up with new strategies to gain possessions.

The Terps worked hard in the midfield to cause turnovers and decrease the time the Wildcats spent in scoring position — something they’ve been practicing, according to Griffin.

“To be able to kind of have that composure and that poise when you’re down there having to play defense first … it says a lot about our team and where we are at this point in the season,” Reese said.

Maryland’s hustle paid off. The Terps picked up 24 ground balls, giving them opportunities to score on fast breaks. Maryland also caused 13 turnovers, tying its earlier season-high from its matchup against Delaware.

With Shannon Smith and Jordyn Lipkin stepping up in the circle for Maryland in the fourth quarter, the Terps were finally able to overpower the Wildcats on the draw control, winning 5-2.

“We came up with some big ones at the end of the game which were huge,” Reese said. “So I love the growth there.”