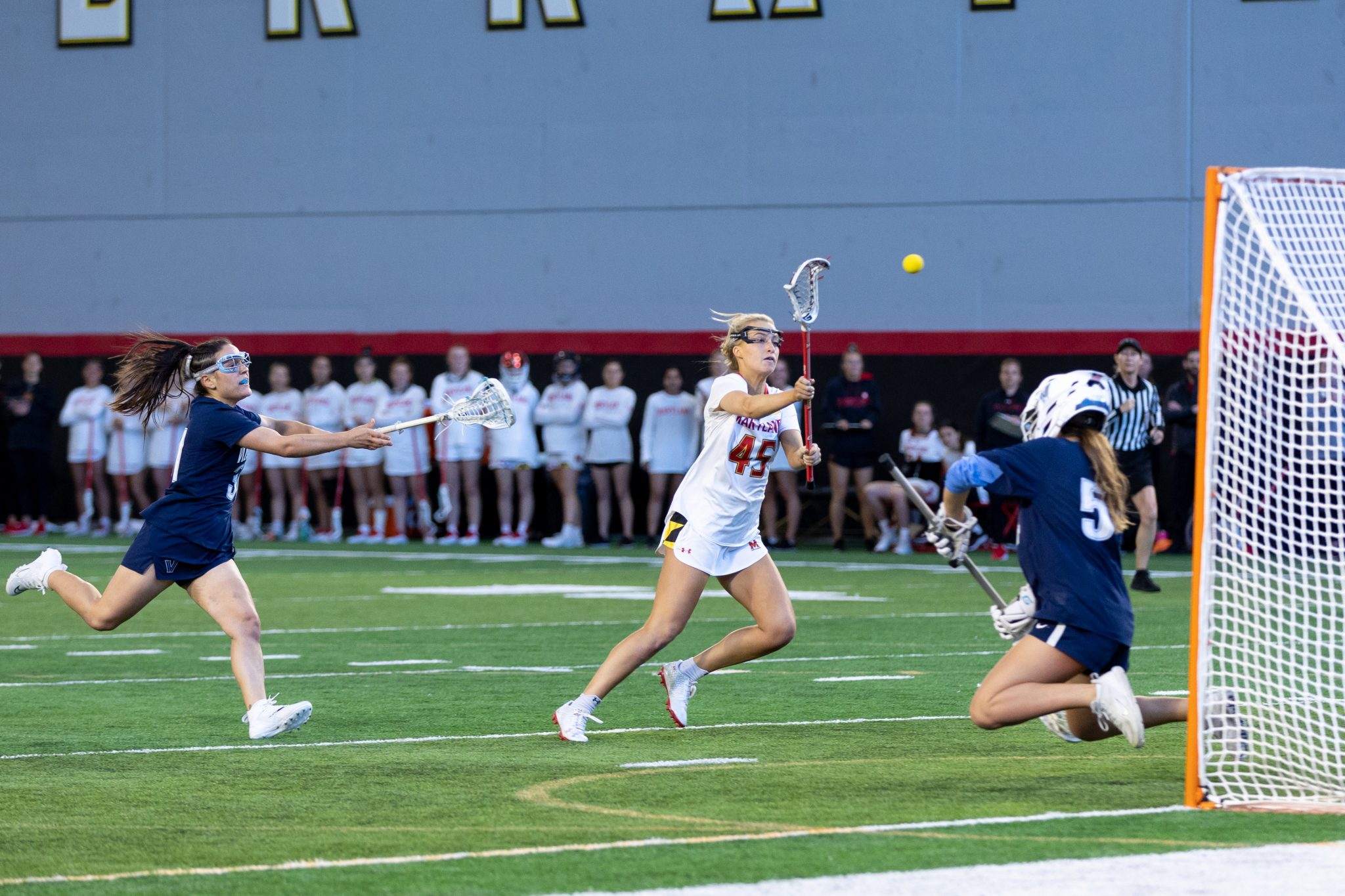 Aurora Cordingley was on the hunt for a scoring opportunity.

Dodging Villanova defenders and launching the ball into the top of the net, Cordingley notched her sixth goal and 11th point of the contest, both season-highs.

Cordingley’s offensive outburst put Maryland women’s lacrosse in control of the game in the fourth quarter. And in a rare indoor game for Maryland, the team conquered Villanova with consistent offense and quick thinking in the midfield to win, 19-7.

“It’s all on my teammates,” Cordingley said. “They push me every day in practice.”

Following their pattern from previous games, the Terps started off strong. Grace Griffin received a pass from Eloise Clevenger and fired the ball in, while Clevenger scored a goal of her own less than a minute later.

But Villanova fought back, whipping the ball into Maryland’s cage twice to quickly tie the game at two.

Griffin put the Terps back in the lead with her second goal of the game.

Despite regaining the lead, Maryland couldn’t dominate the pace of play in its usual fashion. The Wildcats fought hard against the Terps on both sides of the field and won draw controls 5-3 in the first quarter.

But Maryland wasn’t going down without a fight. Clevenger scored her second goal of the day before Cordingley chucked the ball past the Villanova goalkeeper to wrap up first-quarter scoring.

The Terps hit the reset button before the second quarter and were ready to roll again.

“I’m proud of our team,” coach Cathy Reese said. “I think we’re learning a little bit from every game that we play.”

Hannah Leubecker caused a turnover before passing the ball to Cordingley who launched the ball into the net.

Leubecker’s assist was followed by a goal of her own during a free-position shot, giving her team a 7-2 lead.

The Wildcats answered with their first goal of the quarter, but unlike in the first quarter, the Terps stayed calm and kept control of the game.

Leubecker lobbed in another after Cordingley caused a turnover. Her goal was followed by another by Cordingley, with an assist from Clevenger.

Despite Villanova winning the draw control 6-1, Maryland stayed in control by causing turnovers and picking up groundballs. The Terps picked up eight groundballs and caused three turnovers in the second quarter.

“I think it just comes down to hustle,” Griffin said. “Whether or not it turns into a turnover or not, taking seconds off that shot clock and setting each other up for a better defensive possession is what it’s all about.”

Griffin tallied a hat trick to close out the first half with an assist from Cordingley, ending the half up 10-3.

Villanova attempted to capitalize on their goal and score again, but they were troubled by violations. Referees waved off three of the Wildcats’ goals due to various violations.

Maryland took advantage of their struggles and Libby May fired in her first goal of the game while her team was a woman-up, putting the Terps at 12-5.

[‘It’s all about Maryland’: Women’s lacrosse attack stays dominant against William and Mary]

But May got the last word of the quarter, ducking around Villanova defenders to score while Maryland was a woman-down.

Villanova kept Maryland on its toes in the fourth quarter, using a woman-up opportunity to score the first goal of the quarter.

Cordingley gave her team the momentum boost they needed, scoring her fifth goal of the game. Griffin followed with one of her own, bringing the score to 15-7.

Cordingley quickly built upon Griffin’s goal, catapulting the ball into the cage for a season-high six goals. Leubecker kept the momentum going by sneaking the ball past Villanova’s goalkeeper and giving Maryland a 10-point lead.

After receiving a pass from Cordingley, Victoria Hensh whipped the ball into the net. Cordingley’s assist brought her to 11 points in the game, a career-high for the Johns Hopkins transfer.

Shannon Smith closed out the Terps’ fourth-quarter scoring spree with her first goal of the day, putting the final score at 19-7.