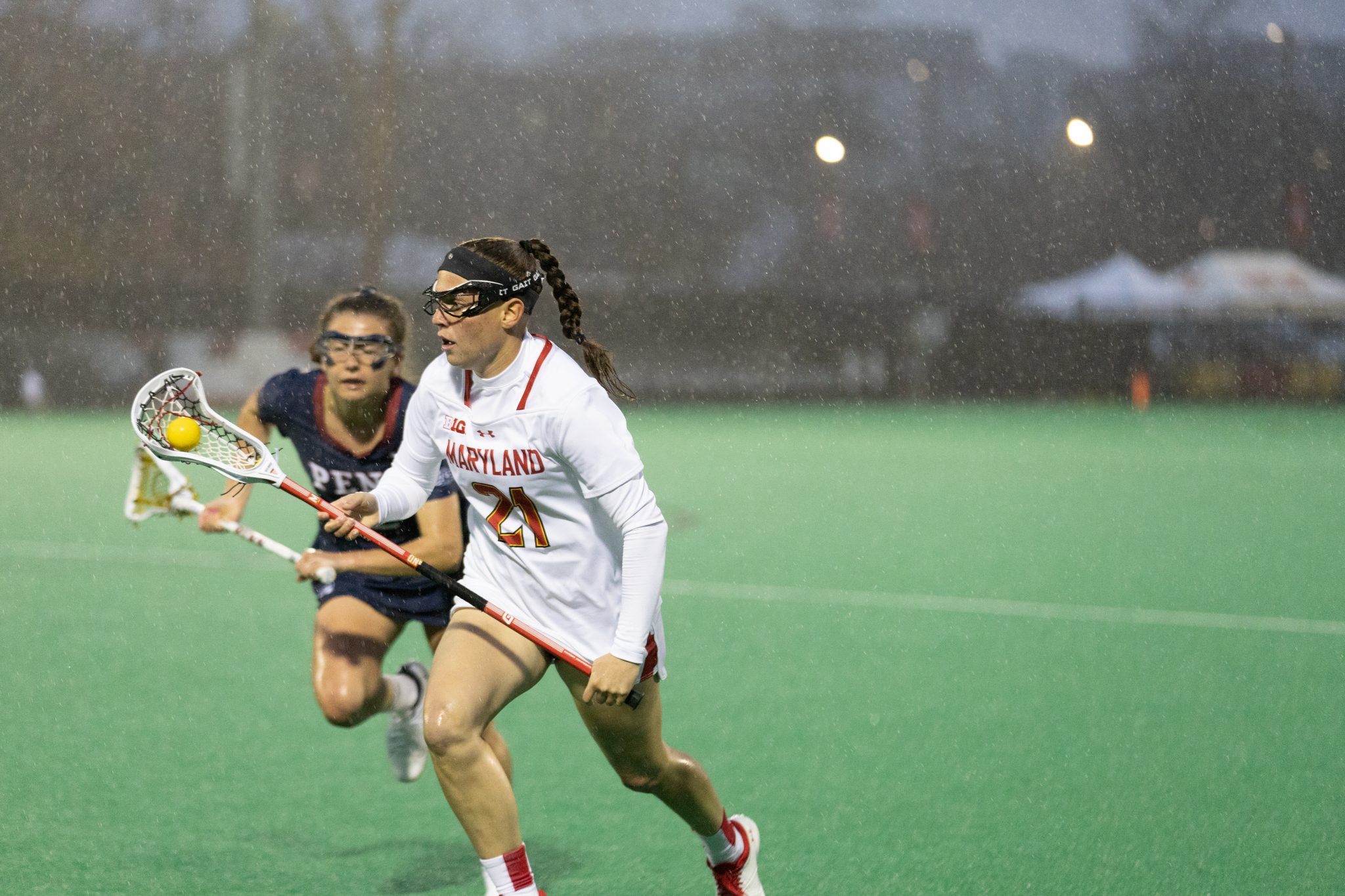 Jordyn Lipkin runs downfield with the ball during Maryland women's lacrosse's 15-11 win over Penn on March 23, 2022. (Riley Sims/ The Diamondback)

Aurora Cordingley managed to cause a turnover in the first quarter, scooped up the ball and raced downfield. Rather than taking a shot at goal herself, Cordingley passed the ball to her teammate — Hannah Leubecker — who hurled the ball into the cage for her second goal of the game.

Just three days after its assertive win over Rutgers, Maryland women’s lacrosse was back in action, this time against Penn. But unlike their previous game this week, The Terps weren’t able to dominate gameplay in their matchup with the Quakers.

Nevertheless, a well-balanced first quarter set Maryland ahead early and it didn’t relinquish the lead at any point, coming out on top, 15-11.

“I’m proud of us for pushing it out and finding a way to win,” coach Cathy Reese said.

Despite the rain in College Park, the Terps came out fighting, going on a 3-0 scoring run with goals from Eloise Clevenger, Shannon Smith and Cordingley.

Similar to its game against the Scarlet Knights, Maryland struggled on the draw control, which gave the Quakers their first opportunity to get on the board.

But the Terps fired back. Clevenger lobbed in her second goal of the day after an assist from Libby May. The score was bumped to 6-1 after a duo of goals by the reigning Big Ten Co-Offensive Player of the Week, Leubecker.

Maryland made some progress on the draw, winning five in a row to maintain control of the game.

A goal from Kate Sites, her first since the Terps’ matchup against Delaware, put the score at 7-1.

Penn had opportunities to score at the end of the first quarter, but couldn’t capitalize on them with goalkeeper Emily Sterling making three saves in the last three minutes of the quarter.

“I absolutely love having her as our goalie,” defender and Penn transfer Abby Bosco said. “She’s coming up with awesome saves and it just shifts the momentum for us.”

The Quakers opened up scoring for themselves in the second quarter with a sneaky shot to the bottom of the net by Kaitlyn Cumiskey.

The Terps scored one of their own after May fired the ball into the cage on a free-position shot. Penn responded with a 3-0 scoring run, putting the score at 8-5.

After its aggressive first quarter, Maryland was flustered in the second. The Quakers won four of the next six draws and caused two turnovers on a key Terp player in Cordingley.

However, Maryland charged back ahead in the final minutes of the half, scoring three unanswered goals from Clevenger, Leubecker and Cordingley. At the half, the Terps were well in front, 11-5.

Leubecker opened up second-half scoring by dodging through defenders and bouncing the ball down into the bottom of the cage. The Terps appeared to regain their confidence early in the third quarter.

Maryland was looking to build on its lead after the first goal, but couldn’t make it happen despite taking six shots and picking up eight groundballs. It was the Terps’ lowest-scoring quarter since they didn’t score a single goal in the second quarter against Virginia on Feb. 18.

The second half lacked the high-scoring numbers of the first. Both teams had seven turnovers in the third quarter, but neither could create scoring opportunities from them.

Penn ended its nearly 20-minute scoring drought in the beginning of the fourth quarter. The Quakers scored two more in quick succession from free-position shots, lessening their deficit, 12-8.

It was Big Ten Midfielder and Freshman of the Week Jordyn Lipkin who ended Maryland’s scoring woes. Lipkin moved in from the side of the goal and whipped a ball into the top of the net.

“We just needed to start paying more attention to where we were shooting,” Lipkin said. “We had to add more fakes and shoot harder shots.”

Penn wasn’t finished, scoring its fourth goal of the quarter.

The Terps put the Quakers on the back foot once again with goals from Lipkin and Leubecker. Penn had one last burst of energy, with two goals in the last minute of the game.

It was too little too late as Maryland closed out the game, 15-11.