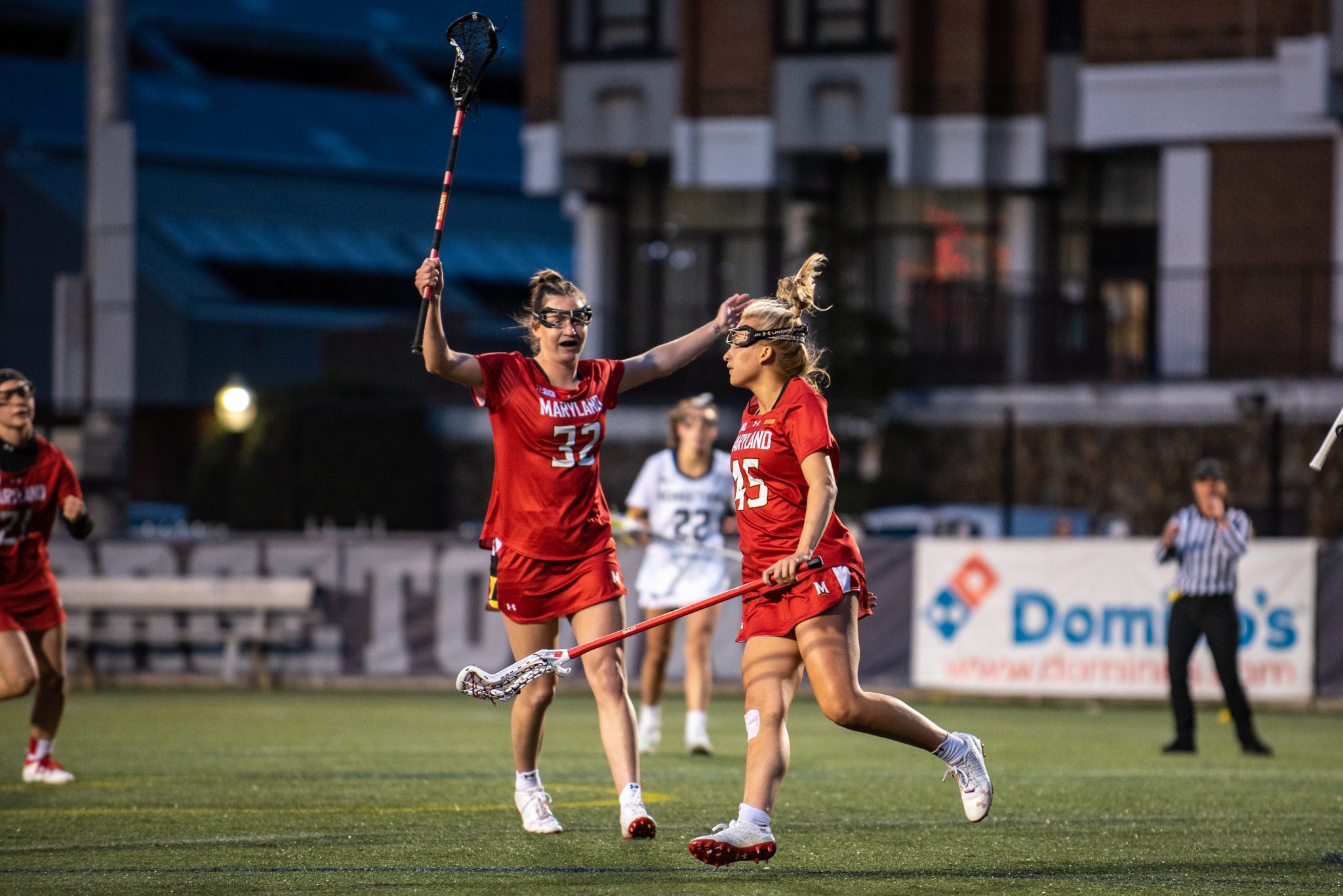 Aurora Cordingley was fired up and ready to score in Maryland women’s lacrosse game against Georgetown, she was just waiting for the perfect moment to strike.

Less than a minute into the game, she found that moment. The attacker pushed past Hoya defenders and launched the ball into the net to put her team on the board.

After its first loss of the season on Saturday, Maryland was hungry for a win going into a midweek game at Georgetown. It proved that Maryland is still a force to be reckoned with in an electric 15-3 win over Georgetown.

“We’re so proud of our team and how we rebounded tonight,” coach Cathy Reese said.

The Terps made their mark early, scoring three goals in the first six minutes of the game — Cordingley scored two of them and assisted on the other.

Maryland stepped up its defensive game, too. The Terps kept Georgetown away from the cage with an assertive woman-to-woman defense that limited their opponents’ shooting opportunities.

Libby May fired the ball down into the Hoya’s goal after an assist from Jordyn Lipkin to raise the Terps’ advantage to four.

Maryland controlled the pace of the game in the first quarter. On offense, the Terps took their time, waiting patiently for the perfect opportunity to strike and score. On defense, they ran the Hoyas ragged, chasing them away from the cage and preventing them from having a single shot on goal in the quarter.

Cordingley wrapped up the first-quarter scoring and collected a hat trick with a bounce shot during a free-position attempt.

“We’ve just been working really hard at getting ourselves in better spots when we take free positions,” Cordingley said. “Our hard work at practice really paid off today.”

The two-minute break between quarters didn’t phase Maryland — it opened the scoring with a goal from Kate Sites to put it up, 6-0.

But the Hoyas finally found the back of the net after nearly 20 minutes. Their defense seemed to find its footing too, holding the Terps to one goal in the first ten minutes of the second quarter.

But Maryland wasn’t held back for long. Cordingley darted towards the net and launched the ball in before Georgetown’s defenders could attempt to stop her.

The Terps came into the second half firing. They scored two goals in the first minute of play — the first from Shaylan Ahearn and the second from Eloise Clevenger with an assist from Cordingley.

But they didn’t stop there. Hannah Leubecker scored her first goal of the day when her team was a woman-up. May followed with her third goal of the game to put the Terps ahead, 11-1.

Maryland dominated on both sides of the field, keeping Hoya attackers away from the net and forcing multiple shot clock violations. When they could shoot, the Hoyas couldn’t get past Emily Sterling.

“We had a game plan and we just knew we had to stick to it,” defender Maddie Sanchez said. “When we were completely together as a full unit, that’s when we really excelled.”

Cordingley found the back of the net for the fifth time when she snuck up the side of the net and rocketed the ball down into the net. Julia Hoffman followed suit with her first goal of the day to take a 13-1 lead for Maryland.

The Hoyas fought back in the last quarter. They won the first draw control and scored just their second goal of the game early in the quarter and later scored their third on a free-position opportunity.

Despite the opposing team’s goals, the Terps never lost focus. They beat the Hoyas 3-1 in the draw circle and ended strong with goals from Clevenger and Shannon Smith to take the game, 15-3.