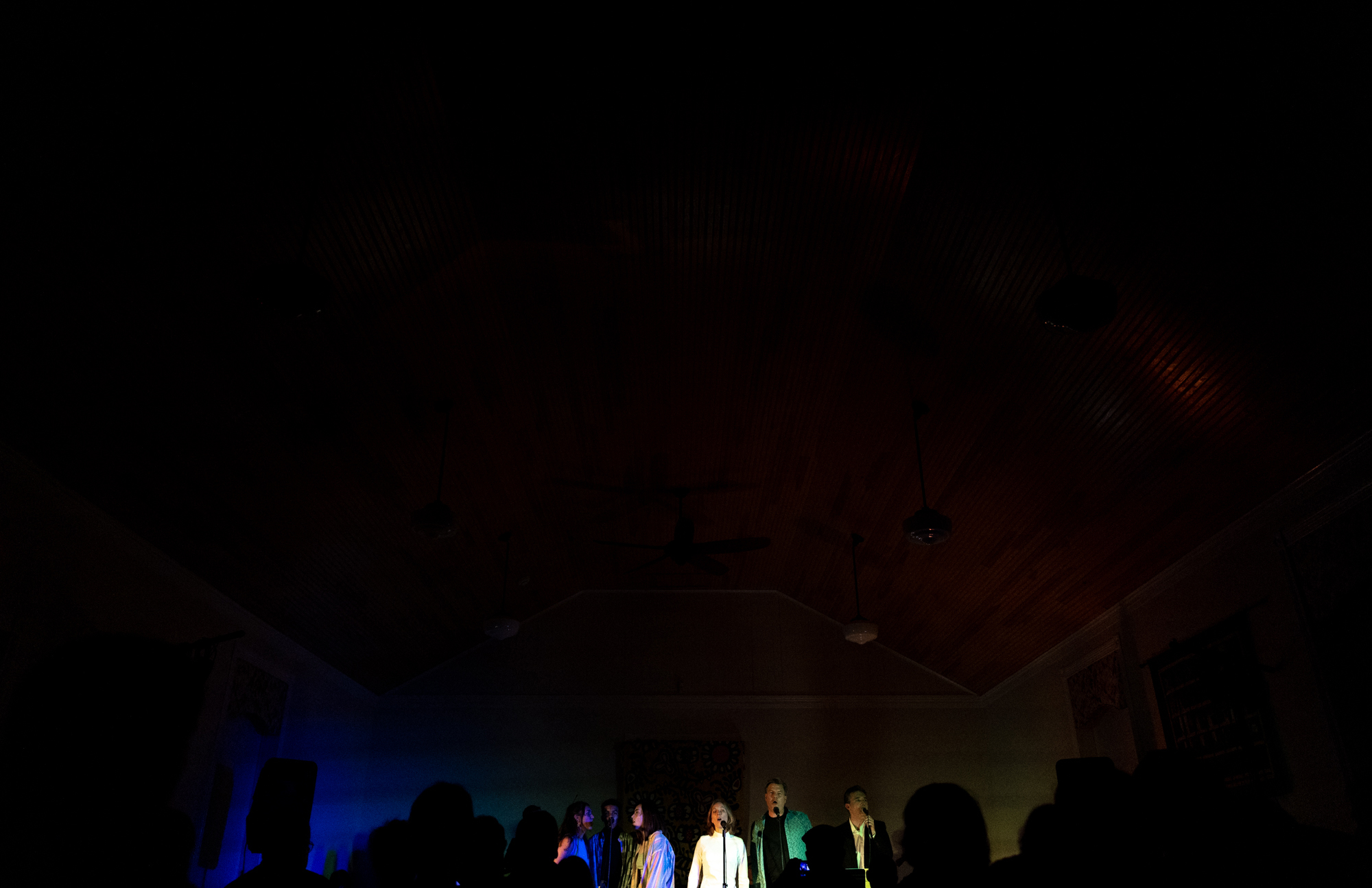 The intimate show at the Old Parish House on April 7, 2022. (Julia Nikhinson/The Diamondback)

By Molly Williams
For the Diamondback

It was a full house on Thursday night at the Old Parish House. Soft, color-changing lights reflected on the musicians as they prepared to start the show. When the band started playing the opening, “Back in the USSR,” Eric Maring beamed as he strummed his guitar.

The performers exuded excitement, smiles rarely absent from any of their faces. After six months of preparation, the show was ready to begin.

Maring, a former University of Maryland graduate student who currently teaches music on campus at the Center for Young Children, helped produce the show — a rendition of the Beatles’ White Album, performed by musicians ranging from middle school age to adulthood.

The crowd was lively and engaged, cheering on their family and friends on stage. Helping hands gave out cake during “Birthday,” and when the guitar solo on “While My Guitar Gently Weeps” echoed off the old barn’s walls, people whistled and cheered.

“It’s a great joy to see the community come together,” Maring said. “People have missed live music so much. The Parish House gives people a musical experience that they can’t get at any other place, not at the Kennedy Center, not at, you know, any venue.”

Performers also got to learn the history behind the music and were given the chance to pick which songs they wanted to sing.

“It’s just so special to see the young people really come into their own with the music and learn to be a performer, learn what it takes to do something like this because it’s not a small thing,” Maring said.

Isaiah Cooper, a 13-year-old guitarist from Temple Hills, joined the show on Maring’s invitation. Maring, who is Cooper’s teacher, asked him to perform after noticing Cooper’s musical talent and affinity for the Beatles.

Cooper has studied guitar since the sixth grade, and said that playing music is a rewarding and helpful experience.
“If you want to pick up an instrument and play, if you’re bored or something, it can get you out of a lot of things,” Cooper said.

Cooper also said the Beatles were the first rock band he admired, and learning to play their music on his own was a dream come true.

“Overall, it’s just really fun,” said Julian Maring, Eric Maring’s 12-year-old son. “After putting all these months of work in and finally having this concert to play, it’s just so fun and rewarding.”

Julian Maring played clarinet, piano and accordion during the show, as well as sang vocals on the 1968 hit “Helter Skelter.”

Purple light shined on the band as they sang the lullaby-like farewell, “Good Night.” All the performers joined together on stage in harmony, sending the audience home with a fun memory, and perhaps a sense of community that only live music can create.