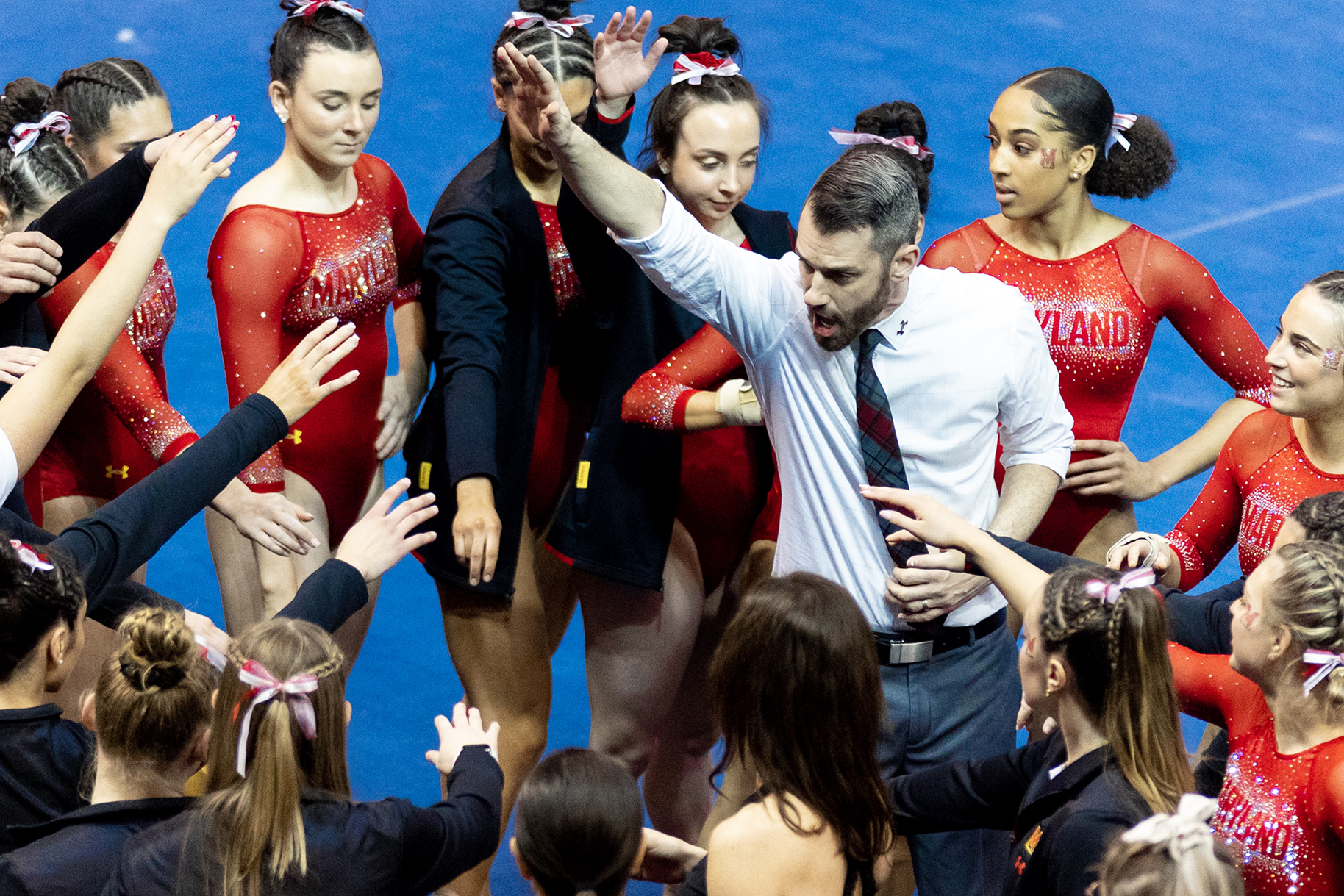 Maryland gymnastics coach Brett Nelligan goes in for a huddle with the team during the Terps' Towson Quad win on Friday, March 11, 2022. (Julia Nikhinson/The Diamondback)

From a sub-par performance in the home-opener, to a historic meet that saw Audrey Barber take the crown as the programs’ all-time scorer, or truly any time Maryland gymnastics competes at Xfinity Center — one thing remains constant.

Taya, 6, and Riley, 4, are eagerly standing in front of their mother, Angela, near the tunnel on Xfinity’s floor. And as soon as they get the green light, they’re off to the races.

As Nelligan catches a glimpse of his daughters dashing towards him, he drops down to a knee so he can swoop both of them in for a hug. But adding to how special those moments with his daughters are, is that Nelligan was once on the flip-side of it all.

2022 marked Nelligan’s 13th year as head coach and 19th as a member of the Terps’ staff — but his Maryland ties stem far before his years as a coach. Nelligan’s father, Bob ‘Duke’ Nelligan, spent 31 years as the Terps’ coach, leading the charge from 1979-2009. And, as a result, Nelligan grew up just like Taya and Riley.

Duke — who is still present at each home meet — is second in line behind Nelligan for his granddaughter’s hugs.

“I’m so grateful and I’m so lucky that they get to grow up the same way I did,” Nelligan said. “Now I get to do that with my kids. And it’s just an incredible blessing, and I’m thankful every single day for this opportunity that I have.”

Taya and Riley can be spotted cheering loudly during each meet, spending time with the gymnasts they look up to and going to the gym after school to spend time with Nelligan — just as Nelligan did with his father.

But spending time with his father as a child didn’t just impact the way Nelligan grew up; it still impacts him daily as he aims to carry on and build off of Duke’s legacy.

“I take it with a great deal of responsibility to uphold and advance what my father built,” Nelligan said. “He is so well loved and respected for what he did for Maryland athletics, and what he did for his alum with almost no resources, and I’m so blessed to have some of the things that he didn’t have.”

Nelligan and the Terps have ascended to new heights in 2022.

The Big Ten as a whole took a step up this year, with seven teams finishing in the regular season top-25, the highest total the conference has ever seen.

Although a disappointing postseason loss put Maryland at No. 29, its regular season finish at No. 20 was its highest since 2000. That, coupled with its improvement within the Big Ten, are why this program feels it’s on the rise.

The first part of that culture is one that Nelligan took from his father’s time at the helm.

“The only way you’ll get ahead of that rise [in college gymnastics] is if you’re outworking people. And I can say that we are a family-run, blue-collar program, and we believe in out-working our opponents, and that’s what this team and staff has done to get us to this point,” Nelligan said.

And while that’s a reputation Nelligan looks to carry on from Duke, his family by blood, in the process, the program has created a culture that makes them a family by bond.

“I am having one of the most exciting and eventful years that I’ve ever been a part of. I really love the team this year. The dynamic we have is great, we’re really close knit,” Barber said. “We’re really all like sisters, and I just love that about this year.”

But while the Terps were a close-knit and notably loving group, underneath their smiles are fierce competitors. Whenever they ran down the lane toward the springboard on vault, swung around the uneven bars, hopped onto the four-inch balance beam or danced their way to victory on floor, they went into a new ignition.

But getting into that ignition took time.

Starting off on beam in Pittsburgh, the Terps put up their lowest rotation of the season in their very first one, scoring 46.600 while being forced to count a score of 8.300 due to two falls.

The inaugural rotation may have exemplified the first two meets, where Maryland posted underwhelming scores of 192.925 and 194.925. Within weeks of their disappointing start, the Terps turned it around.

Less than one month after the season began, Maryland put up 196.700, in what was then its fourth-highest score in program history, en route victories over No. 6 Minnesota and the Panthers. Beating the Gophers, which is the highest-ranked opponent the Terps have ever topped, marked the first of two major climaxes in Maryland’s season.

“It’s great to see them improving, you want to get better throughout the season, and that’s what they’re proving they can do,” Nelligan said on Feb. 14.

Unfortunately for Maryland, after its steps forward, it took steps back, leading to two sub-196 scores in the Big Five meet and at Penn State.

Struggles on beam continued. However, the Terps were still yet to have All-Big Ten second teamer, Reese McClure, back at full strength. But despite those issues on beam — the lone event McClure competed for her first five meets back in the lineup — Nelligan decided to add to her plate, rather than take weight off her shoulders.

When McClure began competing on floor on top of beam, her beam scores elevated and the junior became a large factor in Maryland’s rejuvenation.

“I have a lot more confidence and I’m starting to hit my routines how I’d like to, and it’s radiating throughout the team,” McClure said on March 6.

The feat was yet another feather in the cap of the senior.

On top of that, Barber earned four All-Big Ten selections in her career, three of which came on the first team. Ranking No. 12 in the all-around in the 2022 season, Barber was also recognized as a second-team All-American.

The magic for Barber and the Terps didn’t stop there — it was just beginning.

Less than a week later, Maryland posted 197.175 in the Towson Tri, the Terps’ season-high and second-highest score in program history. Barber led the charge, posting a career-high 39.625 in the all-around, tying Maryland’s single-meet record.

There, she earned three scores of 9.900 or higher — only two other gymnasts, Alexsis Rubio on vault and Aleka Tsiknias on bars, posted scores of 9.900 that many times or more in the entirety of the season. Barber accounted for 15 of Maryland’s 31 9.9+’s.

After posting three of its five best scores in history, Maryland closed out the regular season in style.

Although that momentum wasn’t fully carried to the postseason, the Terps’ regular season finish gives optimism for the future of the program.

While Barber leaves College Park with her name etched into the record books, juniors McClure and Maryland’s second-leading scorer Emma Silberman look poised to lead the charge in 2023. Freshmen Josephine Kogler and Sierra Kondo showed flashes of stardom, and were trusted in the leadoff spots of the vault and bars rotation despite their youth.

Rubio, who’s vault holds the fourth-highest routine national qualifying score on the team regardless of event, behind only Barber’s floor and bars and Aleka Tsiknias’ bars, is graduating. But, the Terps return four of six gymnasts in their 18th-ranked vault rotation.

On bars, where the Terps ranked No. 13, five of the six in their rotation return, including Tsiknias.

Nelligan said sophomores Alexa Rothenbuescher, who starred on floor, and Elizabeth DeBarberie, who was Maryland’s third-highest scorer, will take another big step-up next season.

Rothenbuescher did not compete as a freshman, and DeBarberie appeared only four times on bars, but both were integral to the Terps’ 2022 success.

If Nelligan is right this established culture is a significant aid to the program, it’s certainly possible this team will keep improving in the long-term. Maryland gymnastics has existed for 47 seasons — for only three of those years, the head coach didn’t have the last name Nelligan.

After Nelligan delivers a post-meet speech, he heads back onto the Xfinity floor. There, he gets on his knees again — not to hug Taya and Riley — but to dismantle the uneven bars. Subsequently, assistant coach JJ Ferreira helps stack the floor’s springboards methodically onto several carts.

To Nelligan, the program’s combination of love for each other and collective work ethic is what led to Maryland’s record-breaking season.