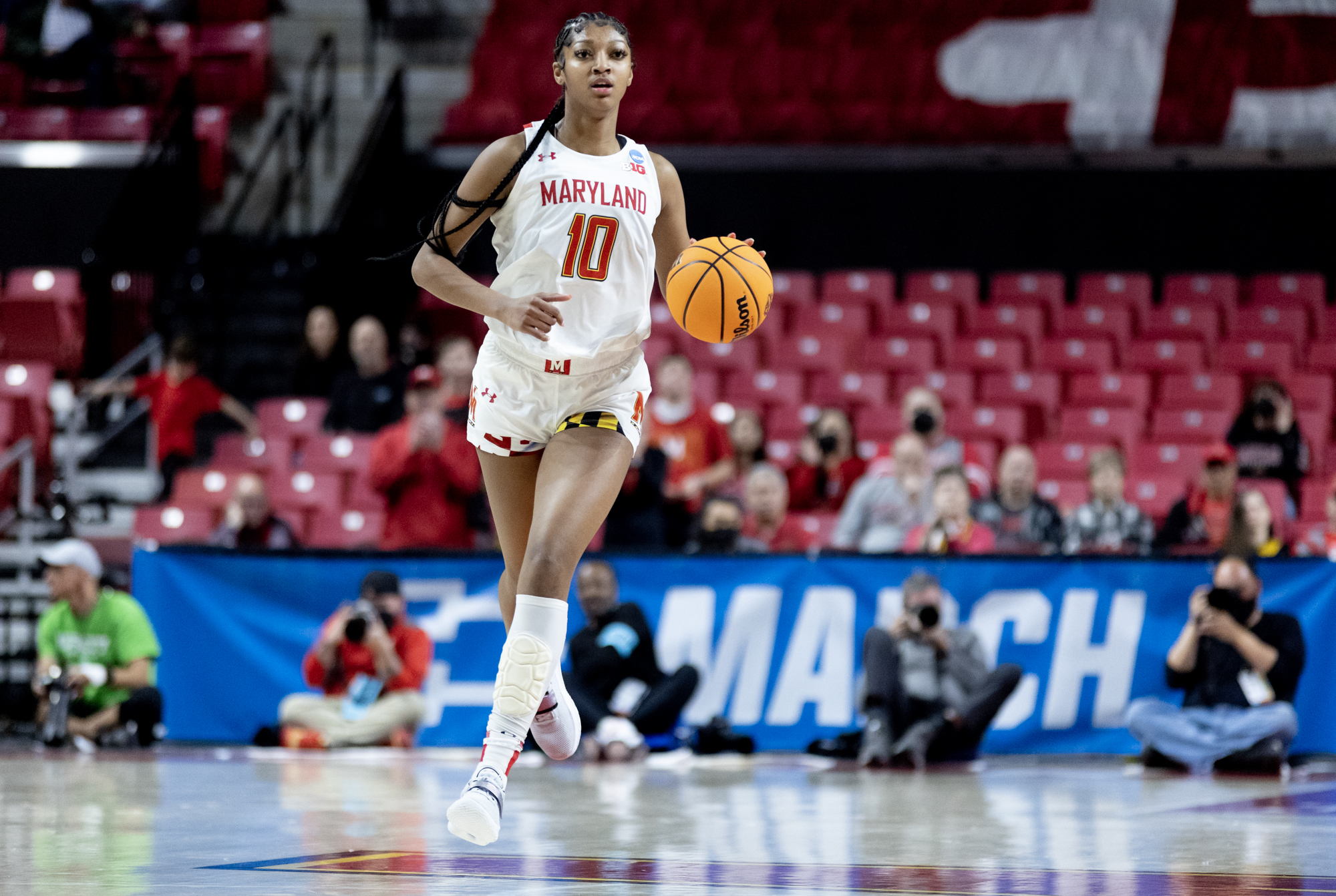 Angel Reese dribbles down court during Maryland women's basketball's 89-65 win over Florida Gulf Coast in the second round of the NCAA tournament on March 20, 2022. (Julia Nikhinson/ The Diamondback)

Ten days after tweeting “We’ll be back, I’ll be back, TRUST ME..” Angel Reese has decided to enter the transfer portal and depart from Maryland women’s basketball. The tweet came just an hour after the Terps’ season ended in the Sweet 16.

Her decision was first reported by 247Sports on Tuesday and later confirmed via social media by Reese and by a Maryland spokesperson.

“We wish these student-athletes all the best as they continue their basketball careers and education elsewhere,”coach  Brenda Frese said in a statement to The Washington Post. “Every team has been impacted by the transfer portal on both ends of it. Maryland basketball is bigger than any one lineup or person. Our staff is committed to bringing the best student-athletes to Maryland.”

Reese’s entrance into the transfer portal came on the same day that guard Ashley Owusu did the same. The pair led the Terps in scoring in the 2021 campaign. With the graduations of Katie Benzan and Chloe Bibby, Maryland will have to replace four of its five players who started in the Sweet 16 loss.

In her sophomore year, Reese was the face of Maryland women’s basketball. She averaged 17.8 points, 10.6 rebounds, and 1.1 blocks per game and was named an AP Third Team All-American and a Naismith Defensive Player of the Year Semifinalist.

The Baltimore native, who was ESPN’s No. 2 recruit in her class, committed to Frese’s program in November 2019 after visiting Maryland, South Carolina, Tennessee, Syracuse, and USC. She was the highest-ranked incoming Maryland women’s basketball recruit in program history.

She missed 12 weeks of her freshman season with a fractured foot that limited her to just 15 games and played limited minutes down the stretch, including only nine minutes in Maryland’s 2020 Sweet 16 loss to Texas.

The decision comes as a surprise, Reese didn’t give any indications as to her desire to transfer during the season.

“I want to be one the best players to come out of Maryland and I want to be able to do it from home,” she said on March 1. “That’s why I came to Maryland, and I think [Coach Frese] has the tools to put around me to get better and get ready for the league.”

It’s not the first time Frese has had to deal with an unexpected exodus of players. In 2020 Taylor Mikesell and Shakira Austin were among high-profile departures, three years before that it was Destiny Slocum. In total, seven ESPN Top 50 recruits have transferred out of Maryland since 2017.

I mean, that’s a seven-player rotation that probably makes an Elite Eight.

“Our new reality is the transfer portal,” coach Brenda Frese said in 2020. “Kids come and go, and they do what’s best for their unique situations. As a program, you have to do what’s best.”