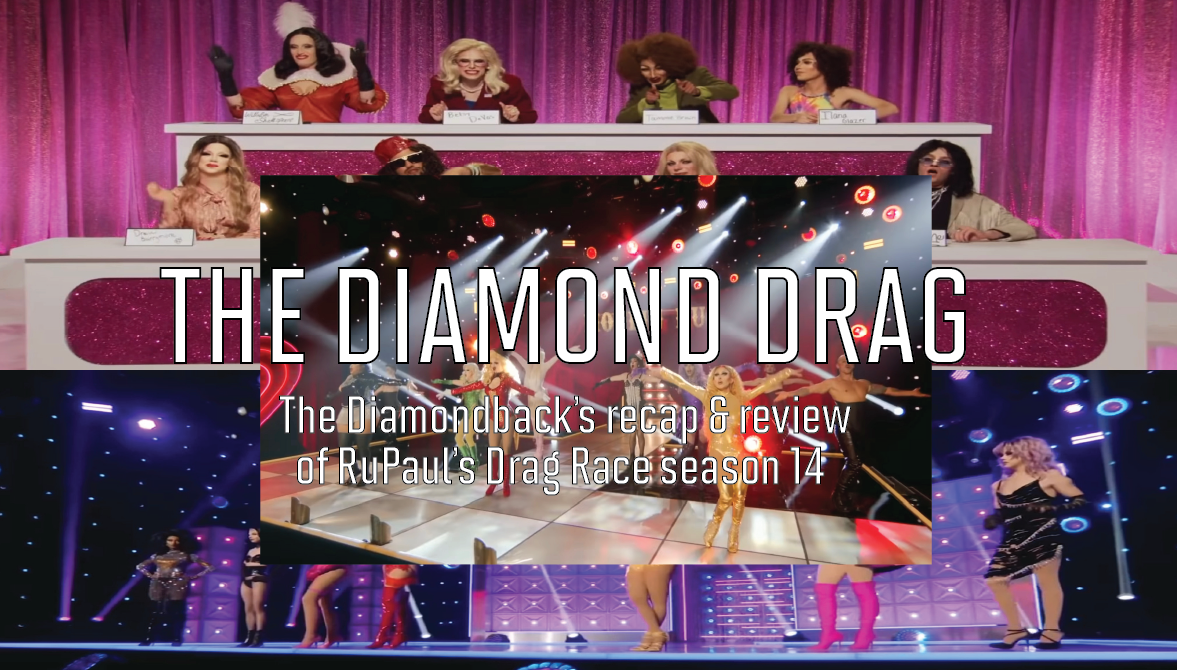 Well, it’s been a bit since I’ve been able to sit down and talk about Drag Race and episodes 10 and 11 of season 14 were certainly spectacles — so we’re doing a special multi-episode recap for this week’s edition of The Diamond Drag.

In episode 10 we saw arguably the most iconic challenge in Drag Race herstory: the Snatch Game. The Snatch Game is an improv challenge based off of Match Game where the queens do celebrity impersonations as the guest panelists of the Snatch Game. I had incredibly high expectations for it this year, as season 14 has a particularly strong cast, and — oh my God, was it horrible. It was a car crash piled on with a train crash piled on with an airplane crash that was then lit on fire and then exploded. DeJa Skye won with her Lil Jon impersonation and rightfully so; she was hilarious. RuPaul announced the seven other queens were all in the bottom and would participate in a lip-sync lalapaRUzza smackdown.

In episode 11, said smackdown took place and it was really good. I felt they edited the lip-syncs to really make it not obvious who was going to win and it made the stakes feel even higher. I want to shout out Lady Camden for her amazing lip-sync against Bosco to “Don’t Let Go (Love),” by En Vogue. It was so sensual and just amazing. The closeup of Lady with Bosco in the back both serving the song is Oscar-worthy. After many rounds of lip-syncing we found Jasmine and Bosco in the bottom, eventually leaving Jasmine Kennedie to sashay away after not having the golden chocolate bar.

After the tense lip-sync smackdown, the queens enter the Werk Room for another week, feeling happy it’s over and ready to tackle what comes next. RuPaul announces in this week’s challenge the queens will be starring in Moulin Ru. I love the Rusical challenges, but they are definitely hit or miss.

Ru leaves the queens to assign the roles themselves and things get juicy. We all remember what happened last time the queens were left to their own devices to choose roles — the ’60s girl groups — and this time is no different. Just about everyone is being stern and digging their heels in.

Daya and DeJa claim the roles of Uniqueness and Nerve, respectively, really fighting for the parts even though no one else wanted them. Angeria and Jorgeous butt heads over the role of Talent with Angeria eventually giving in and taking the role of Charisma. Willow claims the Green Fairy, leaving Bosco and Lady Camden both wanting the roles of Saltine and Mama Z.

The queens head to the mainstage to rehearse and the highlight for me was seeing Leslie Jordan direct the production. I love Leslie Jordan and think he’s hilarious, so it was amazing to watch him.

The next day the queens are getting ready for Moulin Ru and Bosco seems very confident about the performance. Generally, the queens seem excited but they’re making sure to emphasize Bosco’s confidence.

We head to the mainstage and I think the Moulin Ru was phenomenal. Rusical’s can be kind of cringey, but I felt like this one had that perfect balance of fun cringe and genuine entertainment. My standouts were Lady Camden, Angeria, Daya and Willow. The queens who did a “bad” job — and I use that word loosely — truly did a serviceable job and I think on any other season could’ve been safe. No one did particularly bad, so I think this challenge had to be judged under the pretense of who didn’t completely excel.

We hit the runway and the category is mirror mirror. I thought this runway was just fine. I really liked Willow, Angeria and Daya. I love Bosco but this was her fourth week in a row of a bra, corset and panties.

Sometimes queens who were eliminated early and didn’t get to a certain runway post their look and I just want to shout out Alyssa Hunter who would’ve demolished this runway.

The judges announce Lady Camden, Willow Pill and Daya Betty as the tops with DeJa Skye, Bosco and Jorgeous in the bottom. Angeria Paris VanMichaels falls somewhere in the middle, but I thought she was on the higher end in my opinion.

After the judging, Ru asks the queens who should go home and why, and across the board, everyone says Bosco — except herself. I need to highlight Jorgeous so eloquently reading Bosco after Bosco said Jorgeous should go home for being in the bottom three times. I think Jorgeous going “if we wanna talk about track records, she was in the bottom three times in one episode” will go down in Drag Race herstory as one of the most iconic reads.

Lady Camden wins the challenge, and I don’t disagree, but I would’ve chosen Willow because I’m a little biased. Bosco and Jorgeous fall in the bottom two and lip-sync to “Heartbreak Hotel (Hex Hector Remix)” by Whitney Houston. Jorgeous wins BUT in a magical twist of fate Bosco has the golden chocolate bar and gets to stay another week. I loved seeing the pure joy and relief in Bosco’s face when she had the bar but I am begging RuPaul to eliminate someone.