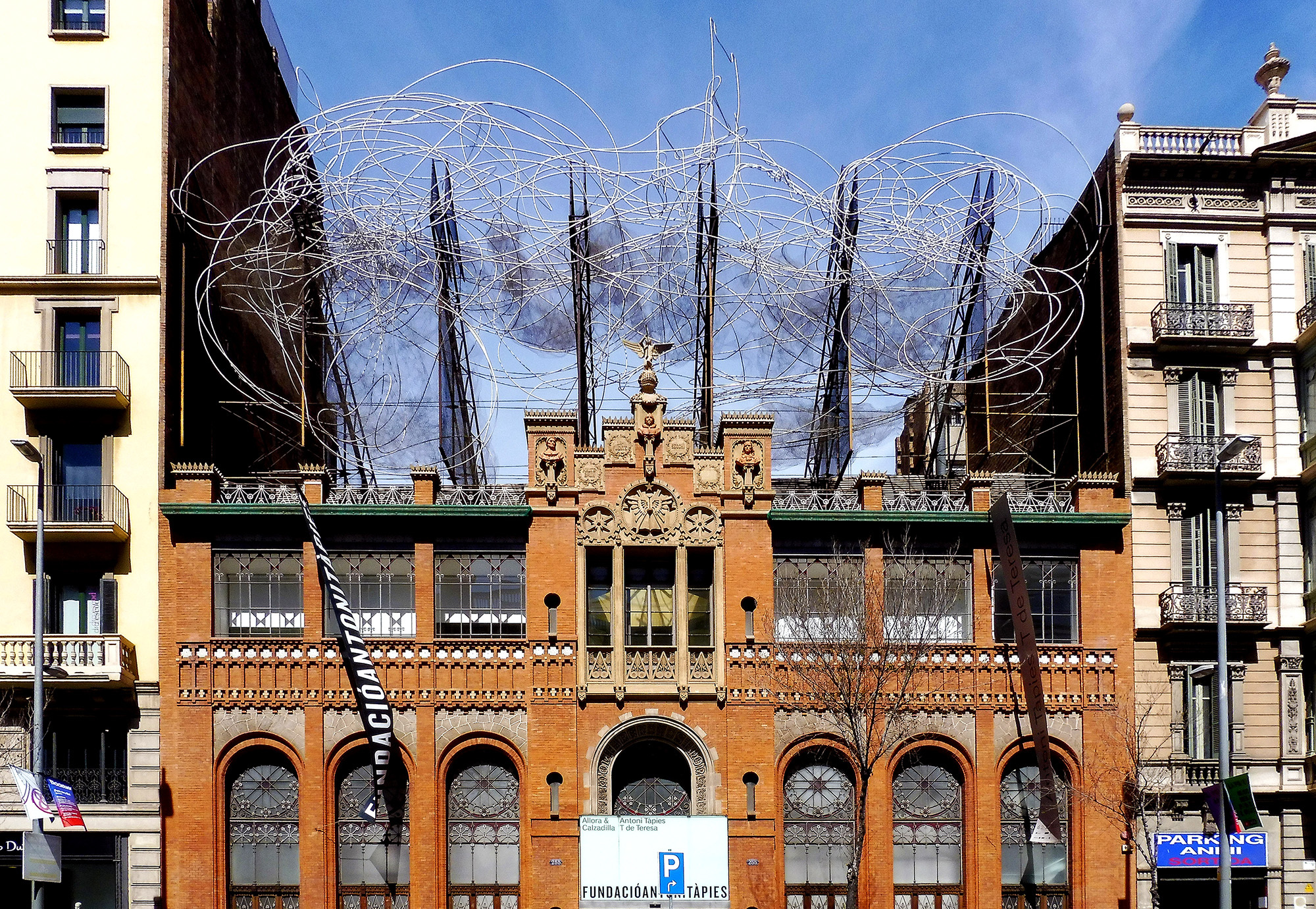 BARCELONA, Spain — Wedged between two buildings twice its size just off of the Passeig de Gràcia, one of Barcelona’s most luxurious avenues, stands the Fundació Antoni Tàpies — a museum and cultural center mainly dedicated to showcasing the life and work of the Spanish painter Antoni Tàpies.

Founded by the artist himself in 1984, the museum was created to promote the study of contemporary art while also showcasing contemporary works through a mixed, interdisciplinary approach, according to the museum’s website. Tàpies’ work is displayed alongside temporary exhibitions, including the current installation of Goshka Macuga, a London-based artist.

Macuga’s work tackles the relationship between art and power, paying special attention to inherited narratives around historical events. In an unconventional interpretation of social and political events, Macuga recycles images and references to help viewers reread mainstream narratives and depart from the innate conclusions of political and clerical elites.

Her sketches and collages claim a majority of the space on the first floor of the museum, with some of Tàpies’ work interweaved. When visitors enter the first floor of the museum, they’re met with a large tapestry spread between two columns in the exhibition hall. This piece from Macuga, titled Plus Ultra, was created for the 2009 Venice Biennale Central Pavillion as a commentary on the problematic relationship between the West and the rest of the world.

Centered around the plus ultra symbol, which was adopted by Charles V and served as a mark of European colonial expansion, the emblem is surrounded by historical and contemporary references that capture tensions between the Western world and other regions, according to the museum. The fabric, with its alarming red trim, includes scenes such as the attack on the Twin Towers and a traveling migrant raft, which shows three people waving for help from within the water. Charles V is placed just right of center with a dollar sign on his face.

As Macuga’s first tapestry, the piece works to deconstruct how mechanisms of expansion negatively impact human relations, and it calls attention to how the desire for military and political control has defined the world order.

In a separate series from 2011, titled Anti-collages, Macuga focuses on censorship in Poland during the 1990s. Enlarging and altering photographs from archives that depict artists associated with “problematic” events, Macuga creates screen-prints of the photos and replaces the artists with a black silhouette — thus removing the subject of criticism.

This technique literally erases the artist from the problem, showing that an issue will still exist regardless of whether the person capturing the event is present.

Macuga’s sketches maintained the artist’s trend of contemporary commentary on society, but some works embraced a more dystopian, futuristic style. In one sketch, titled Finale from 2018, Macuga draws a disheveled landscape with a gravestone inscribed “HOMO SAPIENS.”

Composed with miniscule lines that, from a distance, look like the hardware of a laptop, Macuga sketches a robot resting in the rubble with a text bubble above it filled with ones and zeros. Quite literally speaking in code, the robot seems to be the sole survivor of a world destroyed by technology. The center of the sky is shattered, like a broken phone discarded for its newer version.

The second floor exhibition focuses solely on Tàpies’ work produced during the early 1990s, during which the artist’s work seemed to be influenced by a deep despondency and sadness. These works revolve around themes of death and Tàpies’ exploration of the passage of time.

In one piece titled Quatre Elements (Four Elements), Tàpies refers to the practice of Zen Buddhist philosophy where a person is stripped of their skin, bones and marrow until they become a gust of substanceless air, according to the museum. However, instead of existing as nothingness, a person is then recycled into marrow, flesh and bones again and thrown back into human existence to experience the unfathomable mystery of life.

A gray, cement-like material is cast across a wooden panel, seemingly representing the gray abyss that is the mystery of human existence. The panel is bare aside from its corners, where a single element of life — flesh, body, marrow or bone — lies. The gray matter is scrapped up only within those elements, seemingly illustrating how the mystery of existence can only be discovered within the elements of oneself.

In another, more large-scale piece, titled Embolcall (Wrapping), Tàpies reacts to the Rwandan genocide of 1994. Devoting the center of the wooden panel canvas to a rolled-up straw mat, Tàpies references the mats used to envelope the bodies of victims. Images of crosses and weeping eyes are scattered on the black background, underscoring the concepts of loss and death.

Toiling with not only his own inevitable death, Tàpies captures the pain and suffering that others underwent amid political conflicts. According to Tàpies in a BBC documentary, these mortuary allusions don’t serve to victimize oneself or to let oneself go, but are rather attempts to overcome grief in spite of pain and achieve happiness.

Tàpies received awards and recognition for his work throughout his career and continued to open exhibitions in the early 2000s. The artist died in 2012 at age 88, 22 years after opening the Fundació Antoni Tàpies.