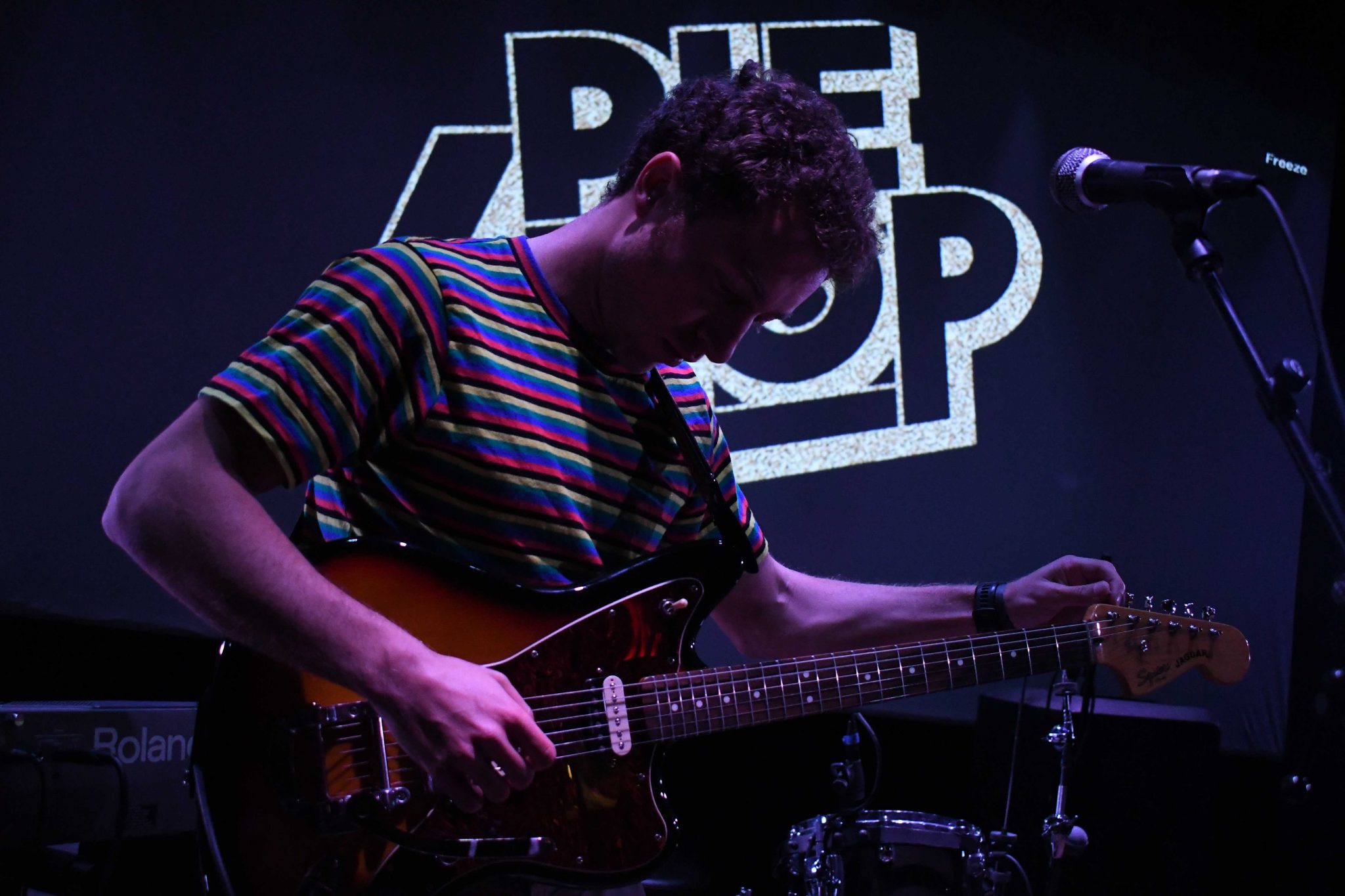 Austin Weber needed no introduction as he and his band stepped onto the stage of Pie Shop. Instead, church-sounding music played as band members Dante DeCicco and Tobias Kelly clasped their hands together in prayer while Fraser Weist held up Weber’s silver YouTube button for 100,00 subscribers above his head.

Weber himself took his time as he got into costume in front of the crowd. He slowly put on each article of clothing, knee and elbow pads along with a biking helmet. For each part of the costume he raised it up high and listened as the cheering of the crowd filled the room. He teased them when it came to his helmet. Weber repeated to almost strap it on just to hear the crowd scream.

And they did every time.

On Sunday night Weber performed at Pie Shop in Washington, D.C., as part of his “WeberMania” tour. He previously performed at the venue on Nov. 9, 2021, with local musicians Jeff Gilman, known onstage as Jeff Draco, and The Dune Flowers. Weber’s grand return to Pie Shop was more crowded than the last, and it was nothing short of spectacular.

Weber describes himself as a member of the indie alternative-industrial complex and, in his Instagram bio, as the “world’s most independent musician.” He has three albums and a handful of singles. Kelly called Weber’s music “fun medicine” that makes one realize that life is great.

“Fun medicine … that’s how I do my job,” Weber said. “Hopefully, I make people feel better about living.”

As the “world’s most independent musician,” Weber is his own CEO. He spends a lot of his time making merchandise, coordinating the deliveries, booking Airbnbs, writing songs and recording them in his studio.

“I always have way too much stuff to do and not enough time to do it,” he said. “But that’s part of the fun of making stuff.”

After he released his first album, D-42, Weber developed a local following in Boston mostly made up of friends. It would not be until he released “Mamma Mia,” his most streamed single, that he would be known nationwide.

Weber received a grant in 2018 from Harvard University to study Buddhist temple bells in Kyoto, Japan. While living in Kyoto and recording temple bells, he decided one day to record himself singing ABBA’s “Mamma Mia” in the Kamo River.

Weber did not post the music video, only sharing it with friends and holding onto the memory. That was until two friends of his grabbed him by the shoulders and insisted that he put it out.

He followed their advice. Then it blew up.

Weber’s cover of “Mamma Mia” currently has more than 11 million views on YouTube and more than 16 million streams on Spotify.

The viral video ended up giving D-42 more listeners, Weber said. He then released his second album, Love Songs for No One, as part of his college thesis.

In the spring of 2020, the pandemic prevented musicians from playing their music in person. However, Weber did not let that stop him from reaching out to his audience.

That March, he announced he was live streaming what he called his “Austin Weber and Friends Work From Home Impossible ‘Social Distancing’ World Tour.” From March 18 to 26, he performed in his garage studio for the location for each “stop” of his tour, such as Paris, Tokyo and even the South Pole.

He said he came up with the tour because he was bored at home and desperately wanted to play shows with people.

“My way of dealing with being alone was to reach out and be alone with other people,” Weber said.

Weber released his third and most recent album, Late to the Party, in March 2021. Live music started to come back soon after.

Starting that October, Weber went on tour from the West Coast to East Coast promoting Late to the Party. Every performance was great, he said, but two memorable places include New York and Washington, D.C. Weber said it had been a few years since he played in New York with a full band.

“Just being able to play a hometown show again was awesome,” he said.

And his show in Washington, D.C., was his first time ever playing at Pie Shop. He said it was the best sounding show of the tour, almost as though it was like he was wearing headphones. He was glad the place was packed when he performed.

The audience was indeed large for the little venue, and once Weber started strumming his guitar, he was already pulling the crowd’s heartstrings. He had almost everyone there moving, whether it was just tapping their feet or dancing to the beat.

He brought along Weist, who he met in an acapella group at Harvard University, DeCicco, who used to come to Weber’s weekly gathering at Dumpling House in Cambridge, Massachusetts, and Kelly, who met Weber through a mutual friend and impressed him at a concert.

This is the first time anybody from the band has gone on tour with Weber.

“It’s a brand new band purposefully assembled for this tour,” Weber said. “The reason I wanted all these guys in the band was because I deeply value the contributions they make to the music.”

Yet, Weber seemed reluctant to even call it a “new” band since he does not feel like the band has changed at all despite different members. He said it is disappointing that it’s only just his name on the marquee.

The group’s tendency to be spontaneous was present at Pie Shop on Sunday. Moments such as when Weber had the crowd chant Kelly’s name during a drum solo or when he and DeCicco shook their behinds together showed clearly how comfortable they were playing together while also blurring the lines of what was planned or a surprise.

Weber’s band members said after the show was over that much of it was improv.

“It was truly raw,” Weist said. “Very few of the bits we did tonight were planned.”

Even Weber dressing in front of the crowd was planned only an hour before they performed. For Weber, it seemed like he enjoyed interacting with the people in front of him.

Gilman, a senior marketing major at the University of Maryland, had a chance to be an opener for Weber again, this time as a band member of The Dune Flowers. He said Weber was great onstage.

“There were more people here than last time,” Drager added. “He has a little bit of pizzazz which I think people really caught onto tonight.”

One of the most memorable moments of the performance was when Weber made a mistake onstage and stopped the entire show. He apologized to everyone there.

“In this world, not everything is perfect,” he said as his band played sad music. “Even seasoned professionals like ourselves make mistakes. But who is to blame but me?”

He asked the crowd if they would accept his apology.

They did, roaring loudly.