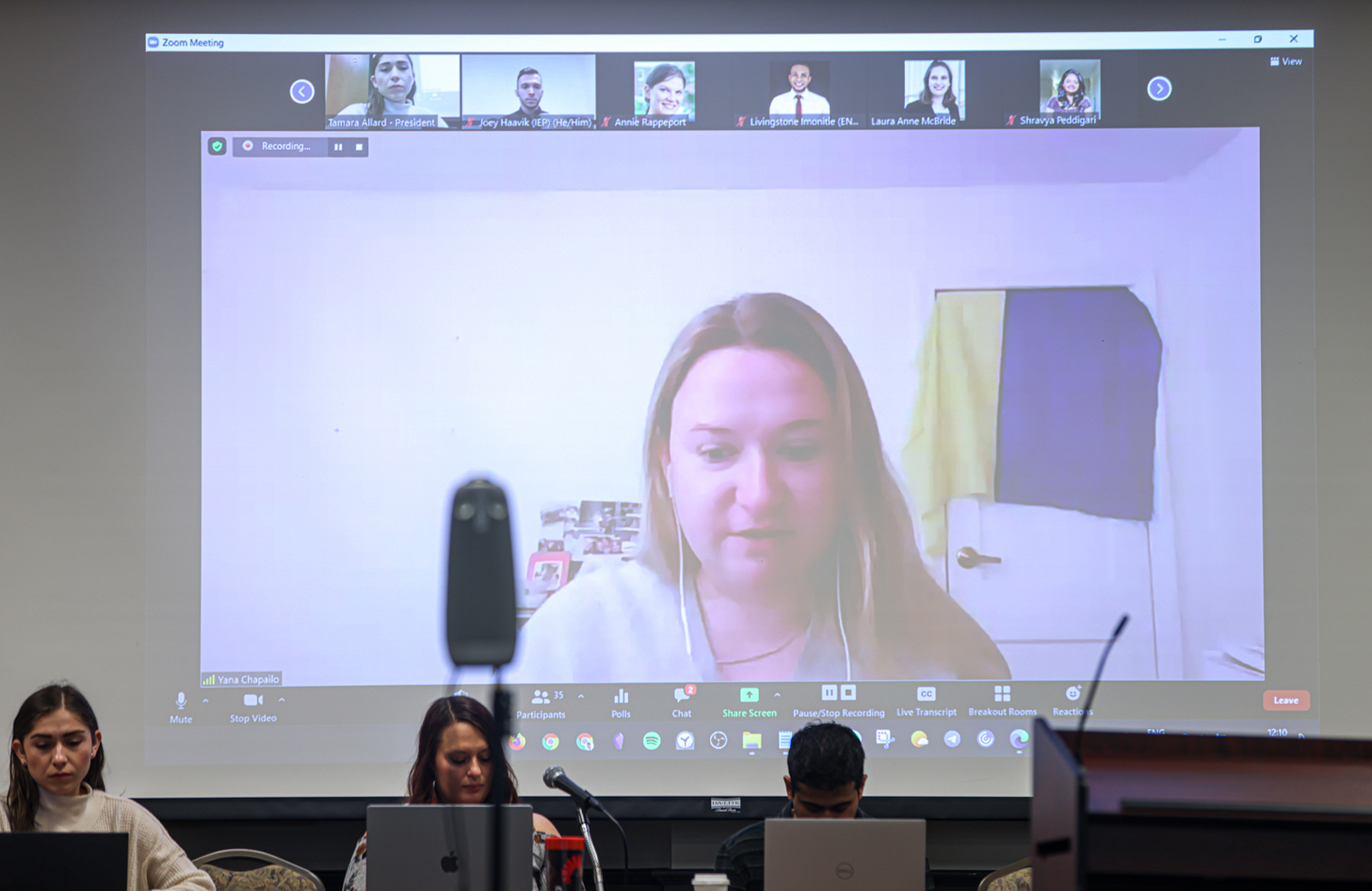 The University of Maryland GSG passed resolutions in response to the war in Ukraine and various bills pertaining to students in the state legislature at its hybrid March assembly meeting Wednesday.

“We have a lot of legislation,” said Autumn Perkey, a government and politics doctoral student and the Graduate Student Government’s vice president of legislative affairs. “Understand we have to pass this stuff today, because it’s all time-sensitive.”

The GSG began a new business by unanimously passing a resolution to openly condemn the Russian invasion and war in Ukraine, and to express support to international students impacted by these tragedies.

“It would show that the UMD community has solidarity for people affected by this war,” said Jacek Garbulinski, an aerospace engineering doctoral student and GSG representative.

The GSG also passed a resolution to support and fund a panel on the humanitarian crisis in Ukraine, hosted by the International Student Affairs Committee.

Guest speakers would include graduate students at this university from Ukraine, and the GSG would contribute $100 to $200 toward the event, according to the resolution.

“The goal of this panel will be to provide information about the war in Ukraine [and] also prevent disinformation,” Garbulinski said.

GSG president Tamara Allard explained why the GSG votes to support, or not support, bills in the state legislature.

When the GSG takes an official position on these topics, the University System of Maryland’s student council can take its position to legislators who might be on the fence about a bill. This opens the floor for policy from students, the development psychology graduate student said.

As such, the GSG voted to request a change to a bill in the Senate and House, SB0119/HB0084. If left unchanged, the bill would exempt students from being criminally penalized for disruptive, violent or threatening behavior on school grounds.

The GSG voted to request a change to this bill so that it would not apply to students at higher education institutions, such as this university.

“The purpose of this bill is to take away the criminalization pipeline that exists in [education],” said Perkey, who wrote the GSG resolution. “In elementary schools, K-12, this is a great bill. It’s highly appropriate for K-12.”

However, Perkey had concerns about the bill applying to undergraduate and graduate students at this university. If a student at this university threatened to kill, rape or beat up another student, then the student would only get a misdemeanor charge, Perkey said.

“Higher education is a place where students who are past the age of 18 are considered legal adults … a charge of misdemeanor of bodily harm is not sufficient when threat could be directed towards women and other marginalized individuals,” the GSG’s resolution said.

The resolution passed with 18 members in favor and 9 members who abstained from voting. The five other resolutions concerning state legislature bills passed in the GSG with broader support.

With 24 GSG members in favor, one against and three who abstained from voting, the GSG passed a resolution in support of a bill, SB0152, that would prohibit universities from using students’ transcripts as a debt collection tool.

“The University System of Maryland has a policy that allows barring attendance or withholding transcripts and grades if timely payment is not received from a student,” the GSG’s resolution said.

However, “withholding transcripts or providing barriers to obtaining transcripts may prevent a student from obtaining a higher paying job they are otherwise qualified for with their degree,” the resolution added.

With 21 members in favor and two abstentions, the GSG also voted to support a bill, HB0164, that would expand protections to pregnant students.

Among other measures, the bill would prohibit institutions of higher education from requiring pregnant students to take a leave of absence, withdraw or limit studies, according to the GSG’s resolution.

With 26 members in favor and two abstentions, GSG voted to support a bill, HB0530, that would investigate disparities between historically Black colleges and universities and non-HBCU universities within the University System of Maryland.

With 21 members in favor and one abstention, GSG voted to support a bill, SB0951/HB0515, that would allow student athletes to modify their uniforms for modesty spanning religious or cultural reasons.

Additionally, with 25 members in favor and one abstain, the GSG voted to support a police bill, HB0666, that would prohibit law enforcement agencies — including the University of Maryland Police — from promoting, demoting, dismissing or transferring an officer based on how many arrests the officer made.

The GSG’s next assembly meeting is scheduled for April 6.