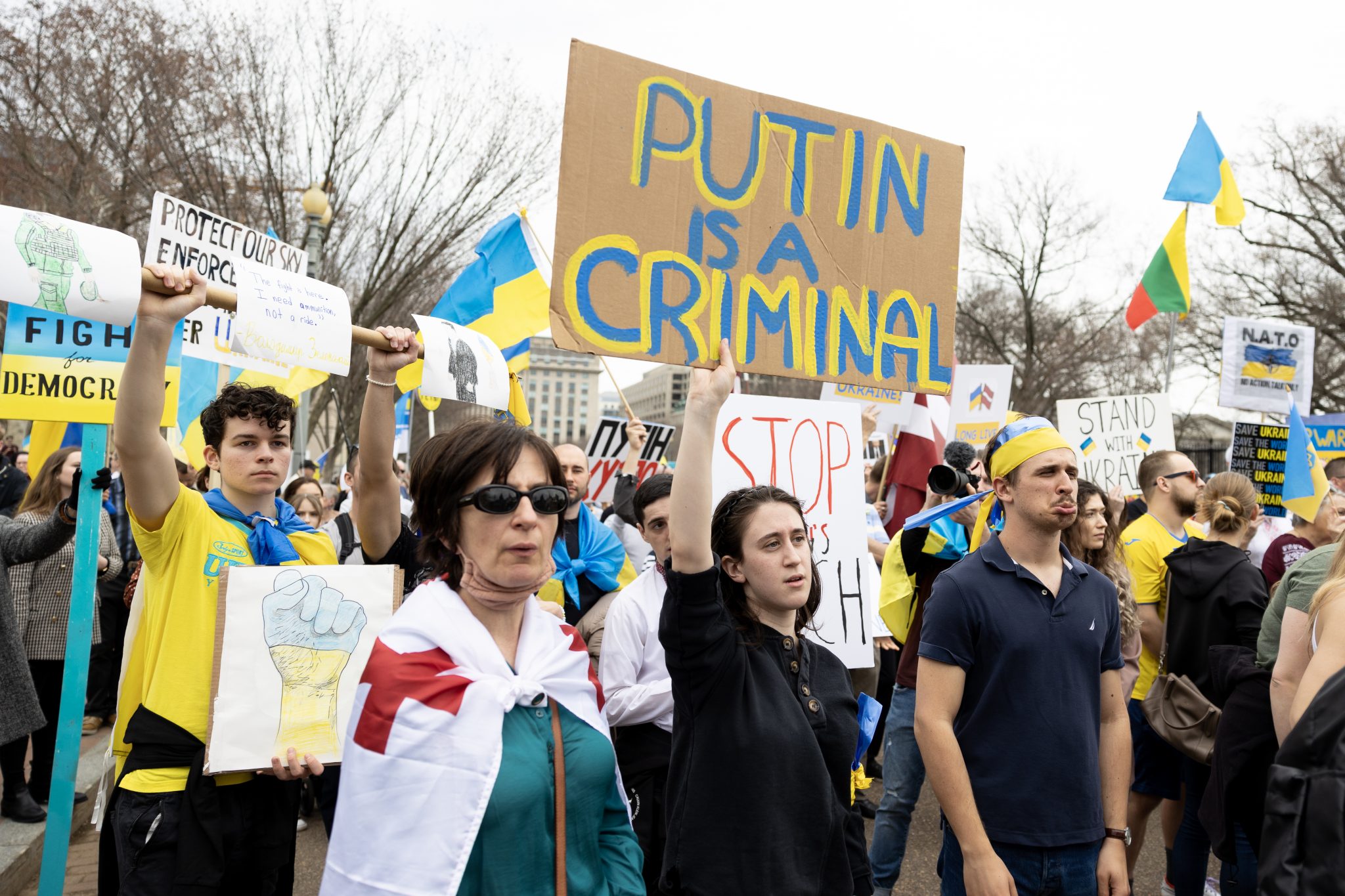 Protesters gather outside the White House in Washington, D.C., as part of the National Rally to Support Ukraine on Sunday, March 6, 2022. (Cam Andrews/The Diamondback)

ANNAPOLIS, Md — Maryland lawmakers are considering legislation that aims to remove some economic investments from Russia after Russian President Vladimir Putin’s invasion and violation of the sovereignty of Ukraine.

Sen. Sarah Elfreth (D-Anne Arundel County) introduced emergency legislation on Feb. 25 that would direct the state’s $70 billion retirement and pension system to divest from its Russian assets in response to the war. The Senate Budget and Taxation Committee will hold a hearing on the legislation on Friday.

Del. Brooke Lierman (D-Baltimore City), the co-chair of the committee, told the Associated Press the estimated value of Maryland’s assets had fallen to $28 million by the end of the committee’s March 3 meeting due to divestment activities and devaluation.

Elfreth’s legislation calls on the Board of Trustees for the state’s retirement and pension system to review the state’s holdings in Russian accounts to divest them.

Both Gov. Larry Hogan and state Comptroller Peter Franchot have called on the state’s pension system to divest from Russia.
The legislative steps to disassociate from Russia have also prompted local action. Some Maryland counties are suspending the sale of Russian products. Other small businesses have donated profits to support Ukraine.

Montgomery County Executive Marc Elrich announced on Feb. 27 that all alcohol from Russia would not be ordered through the county’s alcohol and beverage services stores until further notice in solidarity with the people of Ukraine. The Virginia Alcoholic Beverage Control Authority announced an identical ban that same day.

Local businesses such as Vigilante Coffee are also taking action to support Ukraine.

“We realized that this was gonna be a long battle, and it was going to be extremely difficult on families and children, as all war wars are, and so I immediately started looking to see how … to try to help out,” Roessler said.

Now, the company plans to launch another fundraising campaign with profits sent to the Ukrainian Women’s Fund until March 18 to help out during International Women’s Day while continuing to aid Ukraine.

“The role that Ukrainian women are playing in this story is one that’s going to be recorded in the history books,” Roessler said. “I have no doubt whatsoever about that.”

bianca + jean is donating 20 percent of all sales from its Ukrainian flag face mask to CARE, an Atlanta-based humanitarian organization aiding those affected by the conflict.

Owner Mia Montgomery said she will continue making and selling Ukraine masks as long as she can help Ukraine. The community response to her business’ fundraiser has been “overwhelming.”

“If I have the mask on, people will stop me and ask me where did I get it and literally want to buy them off of me on the street as if I have Girl Scout cookies,” Montgomery said. “People have just really, really been receptive and wanting to help.”

Montgomery added that selling masks to aid Ukraine provides a multifaceted way of helping others. It’s “symbolic of caring for your neighbor near or far,” Montgomery said.
Her business’ strong community makes it perfect for helping Ukraine, Montgomery said. All of Montgomery’s customers can show solidarity with Ukraine through their face masks.

Being able to rally the community to make a big difference is a key feature of bianca + jean, Montgomery said. This gives her business more power in helping with the situation in Ukraine, she added.

“Our business is really rooted in the strength of our community,” Montgomery said. “We know that if we tap into our community they’ll respond and they’ll get behind us, and there’s power in that.”