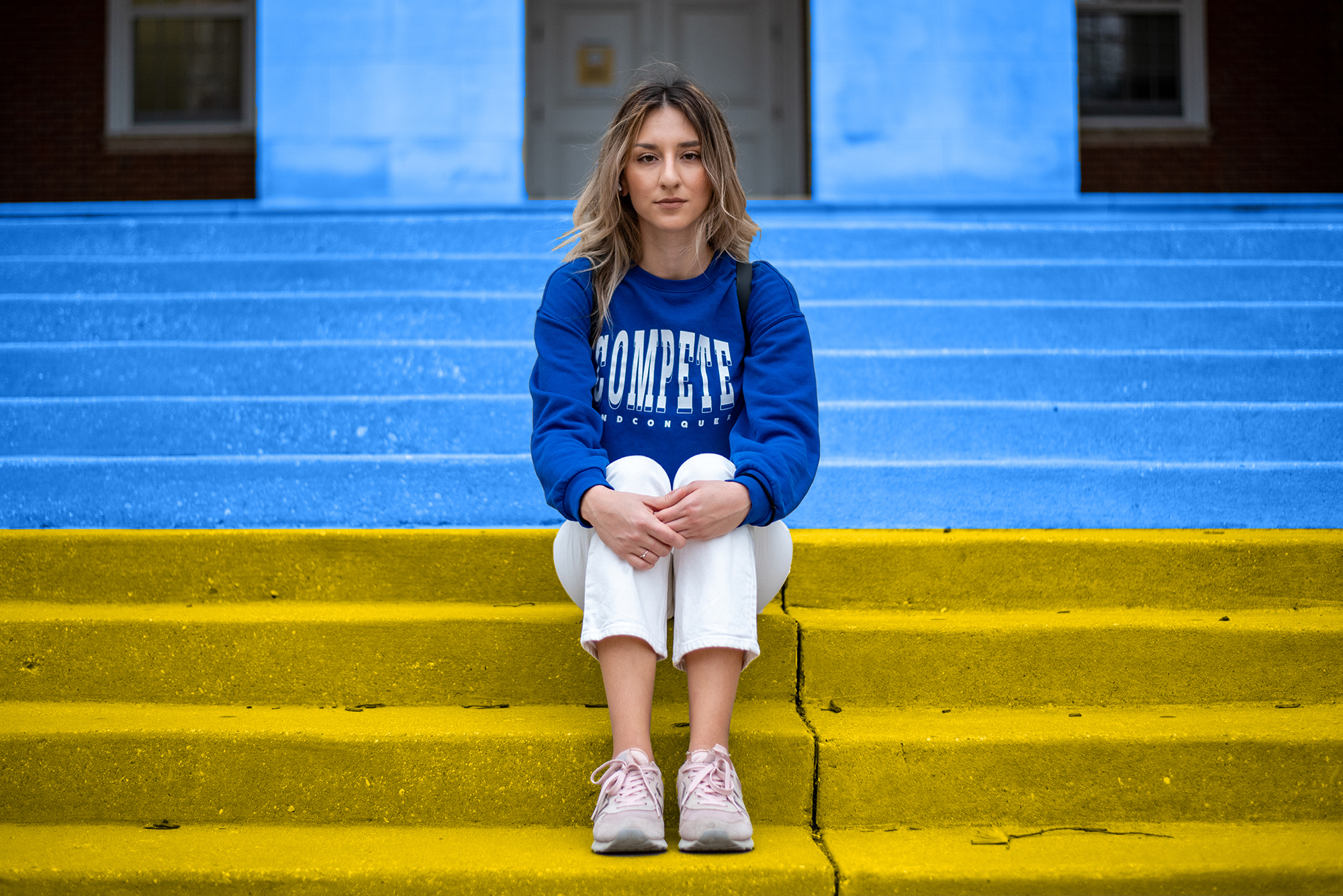 Tetiana Tytko, who is from Ukraine, is one of the founding members of the student organization. (Joe Ryan/The Diamondback)

In the wake of Russia’s invasion of Ukraine, Ukrainian students at the University of Maryland are forming a student association that aims to raise awareness and support for Ukrainians in the campus community.

Alan Elbert, a sophomore computer science major who has family in Ukraine, posted on Reddit last Saturday asking if other Ukrainian students wanted to start a student association.

“We just call ourselves the Ukrainian student group, like nothing official,” doctoral student Tetiana Tytko, who is also from Ukraine, said. “But we sat down, and we brainstormed some of the events that we want to organize on campus.”

Elbert said Tytko reached out to him after seeing the initial Reddit post. Elbert and Tytko have reached out to other Ukrainian students since the post.

The Ukrainian Student Association is trying to become an official student association under the Student Organization Resource Center, according to Elbert. Elbert said they needed to find a faculty adviser and make a constitution and bylaws.

[Hundreds take to D.C. to protest Russia’s invasion of Ukraine]

“The angle for us is to do everything that we can in our power to first support other Ukrainians and people who are affected by this war on campus,” Tykto said. “I found it very nice just to be surrounded by people who are going through the same stuff.”

The Ukrainian Student Association is planning more events and has set up a Google form to connect Ukrainian students and notify others about upcoming events.

Others are also trying to get involved. Oleksandra Kepple, a post-doctorate in veterinary medicine, said she may want to become the faculty adviser for the group. Kepple, who is from Ukraine, said she had occasionally protested in the past. Now, she protests in support of Ukraine every week.

Sophomore psychology major Nicole Radams’ parents emigrated from Ukraine in the 1990s. Radams said when the invasion happened, some of her family members who were in Ukraine weren’t able to leave the country, even if they had visas or dual citizenship elsewhere.

Radams said her family has been involved with humanitarian efforts such as buying and donating medical supplies. Radams said she wants to see more nationality groups like the Ukrainian Student Association on the campus because her Ukrainian and Jewish heritage has been important to her since her childhood.

“If you were born in Ukraine, or if your parents [e]migrated from there, especially during this time, it’s very important,” Radams said. “And I feel like having a community to fall back on is super helpful.”

The International Students and Scholars Services reached out to Tykto when the war first started. Tykto said they provided the Ukrainian Student Association with resources such as counselors, helped organize the candlelight vigil and helped Ukrainian students who are undergoing the immigration process.

“​​They said whatever we need, we should reach out to them,” Tykto said. “And we’re going to need their support.”

Tykto said she might offend people when she tells them the truth about the situation in Ukraine because it’s an uncomfortable issue to discuss — people are dying in her country every day.

But she said she is grateful for the university community because multiple people reached out who were concerned for her mental health and family.

“I started calling [the university community] my family to be honest,” she said. “I didn’t know my family’s actually everywhere. I didn’t know that there [was] more that unites us rather than separates us from each other.”