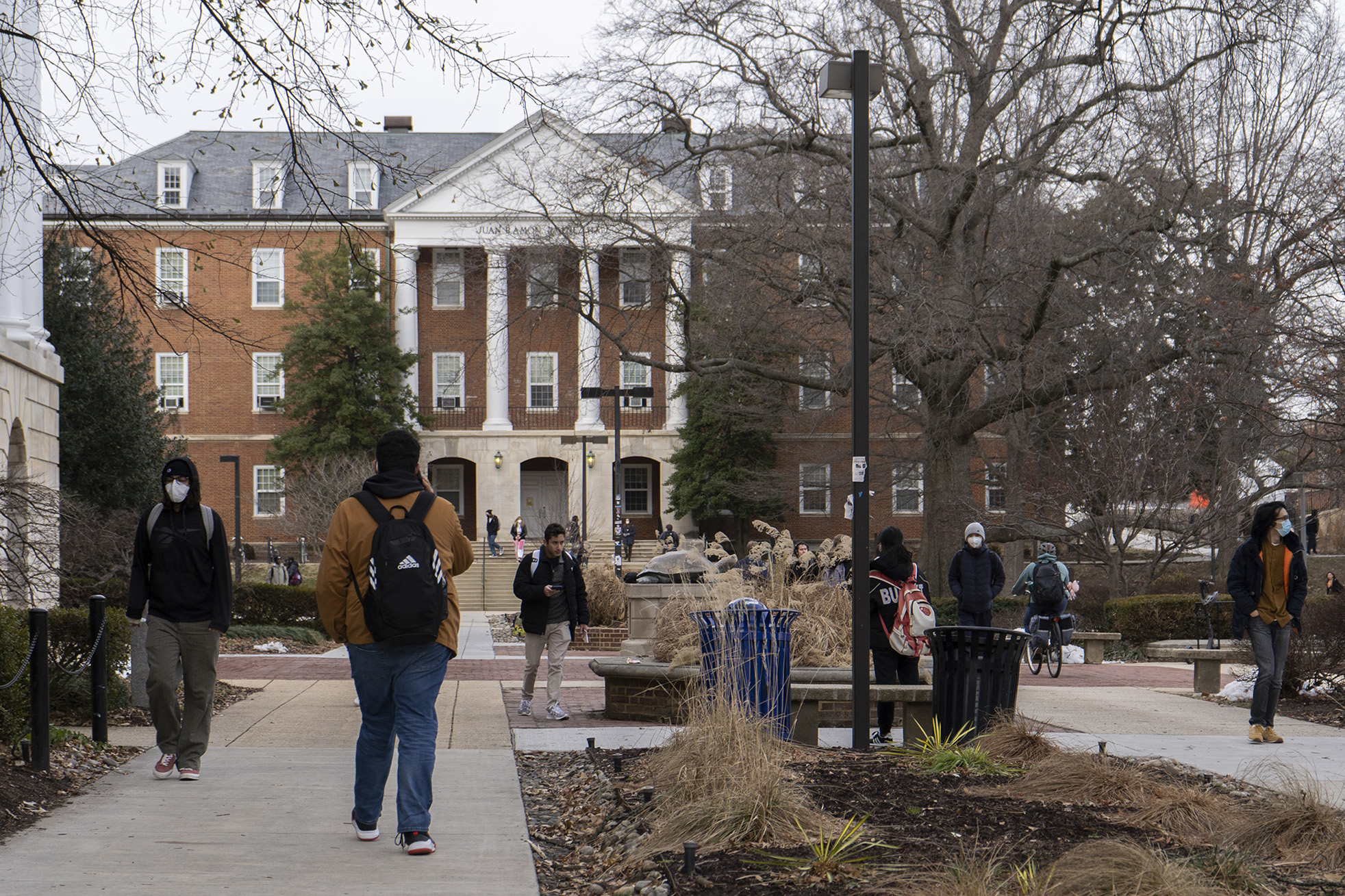 Students stay bundled up on the first day of spring semester as the sun sets over the University of Maryland campus on Jan. 24, 2022. (Taneen Momeni/The Diamondback)

At its virtual assembly meeting Friday, the University of Maryland’s GSG voted to support a proposal that would consolidate some mandatory fees into tuition for both undergraduate and graduate students.

The proposal to the University System of Maryland Board of Regents would “move fees received by UMD Libraries, the Division of Technology, Clarice Performing Arts Center, Nyumburu Cultural Center, Student Facilities and the University Health Center to be fully funded by tuition and state budget lines,” according to the resolution.

This move would alleviate the financial burden of certain student fees for over 4,000 graduate students at this university who currently have some form of tuition remission as part of their educational funding, the resolution said.

Currently, graduate and undergraduate students at the university pay mandatory student fees in addition to — and separate from — tuition each semester.

Although the Graduate Student Government voted to support the proposal, the body has not actually seen the official proposal and does not know who wrote it, according to Annie Rappeport, an international education policy doctoral student who serves as GSG’s vice president of financial affairs and student fee matters.

Rappeport, who wrote the resolution supporting the fee consolidation, said she first heard of the proposal in January during a closed meeting with the Committee for the Review of Student Fees at this university.

“We want to support the idea behind it, because it will help our constituents and will help graduate students,” Rappeport said, adding that GSG has supported and advocated for the essence of the proposal’s idea for years.

“We’ve had fee troubles for years,” Rappeport said during Friday’s assembly meeting. “The only thing that will give us breathing room, quite honestly, is if this proposal passes.”

The fees put students living off a low stipend at a disadvantage when considering the cost of living in this area, said GSG President Tamara Allard, a doctoral student in developmental psychology.

GSG also authorized a special election to be held at the end of this month until early next month.

“We still have lots of seats open,” said GSG representative Daniel Smolyak, a computer science doctoral student. “That’s what this is for.”

The special election would help fill 75 percent of GSG Assembly positions — or 181 out of 240 available seats — that remain vacant, according to the resolution.

“There are newly enrolled graduate students in the Spring Semester who may be interested in representing their department in GSG,” the resolution said, and an election before the March assembly meeting would enable newly elected representatives to attend three out of five of the spring assemblies.

GSG’s next assembly is scheduled for March 9.