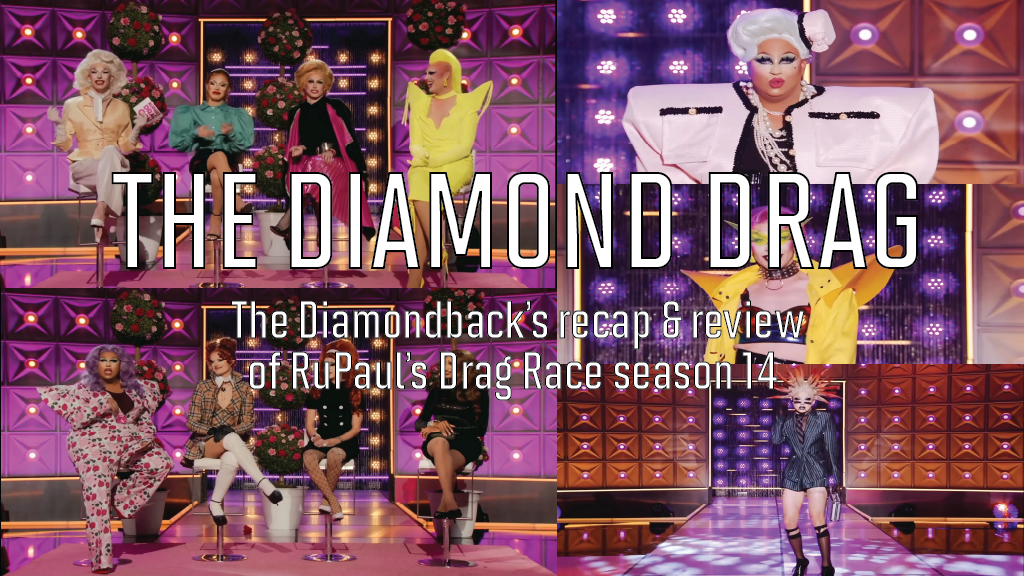 After an emotional elimination, the queens reenter the Werk Room and you can see Jasmine Kennedie is a little distraught. It was very obvious Kerri Colby meant a lot to her so eliminating her must’ve been hard. The queens then celebrate Daya Betty’s first win and she’s happy to be on the uptick and politely apologizes for her competitive drive.

The queens then turn to the age-old drag race moment of counting up the wins and seeing who does and doesn’t have a win. At this point, every queen but Jasmine and DeJa Skye has a win and it’s understandable that would bother them but in a competition, sometimes consistency looks better. Mind you DeJa has been very consistent unlike Jasmine but regardless, I personally think it’s not the time to stress too much.

The next day the queens walk back into the Werk Room for a new week and a new challenge. RuPaul enters and announces the mini-challenge: The queens would be getting into quick drag to pose in a celebrity photobomb moment. Quick drag is always funny because it’s great seeing the queens who try and look pretty in the short time allotted versus the queens who just have fun and make a fool of themselves.

I thought everyone was generally strong but Willow Pill and DeJa stood out to me. Willow wins the mini-challenge and RuPaul announces RuPaul’s DragCon, a drag and Drag Race centered convention, is back and this week. The queens will be hosting their own panels — not at the actual convention but just on the show in the style of DragCon. Both groups would be talking about the same topic: men.

As winner of the mini-challenge, Willow can choose her team. She strategically picks DeJa, Angeria Paris VanMichaels and Lady Camden. This leaves Daya, Bosco, Jorgeous and Jasmine  as the other team.

I think Willow picked her team perfectly because each queen she chose seems very different. Although Willow worked well with Bosco and Daya in the past, they have a similar more alternative aesthetic so it may not have allowed Willow to shine.

She also made sure not to choose queens who either talk too much or don’t know how to talk, i.e. Jasmine and Jorgeous, respectively.

Straight from the beginning, team two, the queens Willow did not pick, is having trouble. The queens have to choose a moderator for the panel and Jorgeous so eloquently asks, “what’s a moderator?” Then Jasmine decides to volunteer to be the moderator and is instantly shut down. Bosco decides to moderate for her team and DeJa for her team.

Not much really happens after our brief introductions to each group’s dynamic, it just feels painfully obvious from the start Jasmine and Jorgeous would struggle. Truly, the editors did a horrible job hiding who would be in the bottom two; it felt like I knew the lip-sync contenders within 20 minutes of the episode.

The next day the queens get ready for their panels and head to the mainstage. First up we had Willow’s team and they absolutely all killed it. DeJa was a perfect moderator because she was able to set up perfect pitches, questions and prompts for her team that allowed them to respond with a good balance of humor and emotion.

I think Willow and DeJa really carried the group the most and while Angeria and Lady Camden had some good commentary, they really fell into the shadow of Willow and Deja. I loved how effortlessly Willow was able to mix dark raunchy humor and real human experiences, like when she made a joke about giving bad handjobs and within the same moment could also have an earnest conversation about losing her father at a young age.

Next we had team two go and it was just fine. You could see the cogs really turning in Jasmine’s head trying to get an efficient conversation out but it only caused more confusion and mediocre conversation. Jorgeous had a similar issue where she just really couldn’t find her footing in the panel. I think Daya was fine and I felt mixed on her outfit. I liked how group one had a consistent sophisticated, more formal look but in group two you had that in Bosco and Jorgeous but Jasmine aged herself and Daya looked like she was in Mad Max.

You then had Bosco who absolutely steamrolled her group. It was great joke after great joke after insightful comment and it made her look better because everyone else was kind of bad.  She knew how to get RuPaul laughing with some more dated jokes, specifically starting the panel off going “Welcome to the second panel of the day: men, electric boogaloo part two now with more men.”

We hit the runway and the category is shoulder pads. I have two words for you: DeJa Skye. DeJa absolutely demolished this category and undoubtedly had the best look of the entire night. Her Chanel-inspired suit meeting linebacker-look was so good and met every single mark. Some other strong looks were Lady Camden’s nutcracker look and Willow’s,  which barely had a shoulder pad but was still cool.

My least favorite looks were Jorgeous’ because a puffed sleeve does not make a shoulder pad and Jasmine’s because it was just boring.

We find DeJa, Bosco and Willow to be in the top and Daya, Jorgeous and Jasmine in the bottom. Bosco wins and I disagree. I love Bosco but DeJa and Willow killed it and I really thought it was one of their weeks.

Jasmine and Jorgeous are in the bottom two and I agree with their placement. The anticipation around this lip-sync has been building all season and I was excited. The queens lip-sync for their lives to “Something’s Got a Hold on Me,” by Etta James and this was admittedly a good song choice and a just fine performance. The song ends and Ru announces a “double shantay” or double save. I think this is the first time I have ever not wanted a double save. Normally I don’t care too much when they happen, but this is not worthy of the save when you look at past lip-syncs.