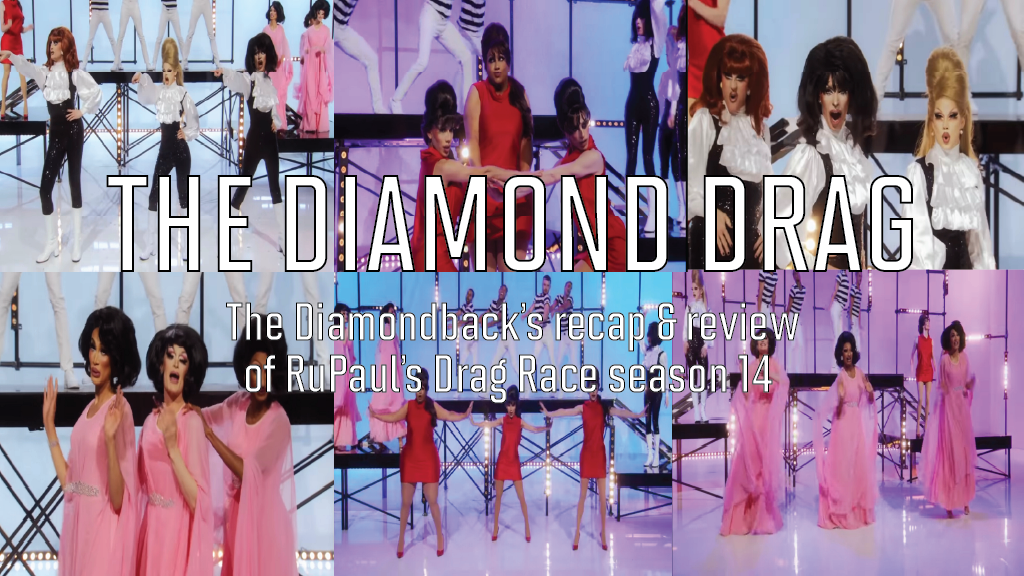 I’ve had a lot of conflicting opinions about this most recent episode of Drag Race. I knew the streak of great episodes was only going to be so long, and this episode proves that.

The queens enter the Werk Room after the non-elimination, and everyone seems to be very happy. Lady Camden is glowing after her win, and the queens are excited to celebrate the victory. Daya Betty is feeling energized after being in the top and hopes to continue this uptick.

Although everyone is happy, Jasmine Kennedie is a little annoyed she wasn’t in the top two. Despite her dismay, she realizes she wouldn’t have been able to perform well in the lip-sync after her emotional backstage moment shown in the Drag Race after-show Untucked.

Jasmine bravely shared she is a transgender woman, and it was a really moving moment of the show that was amazing to showcase.

The next day, the queens walk back into the Werk Room, and competition mode is back on: The queens are ready for people to go home again.

RuPaul walks in and announces a fan favorite, iconic mini-challenge: the reading challenge. Inspired by the documentary Paris Is Burning, the queens take turns reading each other (or in straight lingo, giving playful jabs to one another). As they say every season, “reading is fundamental.”

[Dodie’s back in the U.S. and is more confident than ever]

All in all, I think every queen was pretty strong. I loved Kerri saying Angeria looked like a Wendy Williams letter “P” in regards to her body shape. I also thought Lady Camden’s joke playing off waist vs. waste to Jorgeous was hilarious — but who really knocked it out of the park was Bosco. When Bosco said Jasmine Kennedie is such a braindead slut she puts the “bottom” in lobotomy, I lost my mind. Bosco wins the challenge, but Ru makes sure to shout out Lady Camden for her good reads too.

Ru announces the queens would be forming three 1960s inspired girl groups and writing verses to some original songs. There were the Shangru-las, The Runettes and the Rupremes, playing off of the names of iconic 1960s girl groups.

Ru leaves the queens to divide themselves up into the three groups, and this is when the claws come out. Everyone wants to be in the Shangru-las, but Daya Betty is especially not budging. As annoying as she was to me, I kind of loved Daya being so stern. She’s playing a very interesting game because I’m not sure if she’s trying to be liked — she just seems really motivated by the competition.

After some tense silence, DeJa Skye volunteers to be in the Runettes.

The groups were set as follows: Willow Pill, Daya Betty and Bosco would be the Shangru-las, Lady Camden, Kerri Colby and Angeria Paris VanMichaels would be the Rupremes and DeJa Skye, Jasmine Kennedie and Jorgeous would be the Runettes.

After some brainstorming, the queens go to record their songs with Michelle Visage. First, we have the Rupremes. Angeria instantly knocks it out of the park, and I really don’t think there’s anything she can’t do. She can act, perform, sew and sing. Kerri Colby takes the mic and struggles a bit to get on key. I felt bad for Kerri because it felt like she messed up once and then got flustered when told about it.

Then the Shangru-las come, and all three queens knock it out of the park with some dirty and twisted lyrics that really tickle Michelle. The group said previously their song was inspired by cruising, the act of wandering public spaces in somewhat hidden areas in an attempt to find other people to sleep with in public, and their lyrics reflect that dirty inspiration.

Bosco’s lyric “Can my sister come? She likes to watch,” and Daya’s “He looks like my uncle, but I can’t say no,” were just some of the lyrics that shock Michelle.

Lastly are the Runettes, and there are some issues. I think DeJa lied about not being able to sing because she was pretty strong for someone who allegedly can’t sing. We then have Jorgeous record, and she literally has to talk her verse because she’s so bad at singing. Then Jasmine sings, who is also questionable.

The queens then choreograph their own numbers, and it seems to be a bit of a miss for everyone but the Shangru-las. During this scene, we see the strategic game Willow is playing. She has hidden the fact she choreographs shows back home and uses that to help her team. Meanwhile, Kerri is struggling in her group while Jasmine and Jorgeous are struggling in their group.

The next day, the queens start to get ready for their performances and runways. While doing their makeup, things get tense as Daya decides to confront Jasmine about her read during the mini-challenge and when she was called two-faced. I love a good argument about nothing, and I really enjoyed that Daya wasn’t budging when it came to Jasmine’s retorts.

We cut to the performances, and all in all, they were fun. I really enjoyed the Shangru-las the most and thought their group was the strongest. I liked how they made the song a joke as opposed to how the other groups made theirs more lovey-dovey.

We hit the runway and the category is “Heart On.” I thought this runway was fine overall. I really liked Bosco, and that’s kind of it. I really did not like Jorgeous as I thought it was too simple.

The top queens are Daya, DeJa and Angeria while Kerri, Lady Camden and Jasmine fall in the bottom. Daya is announced to be the winner, and I only sort of agree. I thought Willow was overall the strongest but thought Angeria was the best from the top three selected.

Kerri and Jasmine are announced to be bottom two, and I sort of agree with this. I thought Jorgeous could’ve easily replaced Kerri in the bottom. The two lip-sync to “Un-break My Heart (Hex Hector Remix)” by Toni Braxton, and Jasmine ends up winning, leaving Kerri to reveal her chocolate bar.

Did you also forget about the chocolate bar? Did you forget because you’re trying to drown out this twist or because it’s just forgettable? Kerri does not have the golden bar and is told to sashay away.

I was heartbroken at this. Kerri was the first queen I wanted to have the golden bar and was sad to see she didn’t. She was a trailblazer and will go down in herstory as an iconic queen who changed the game.