The unofficial justice of PSA UMD 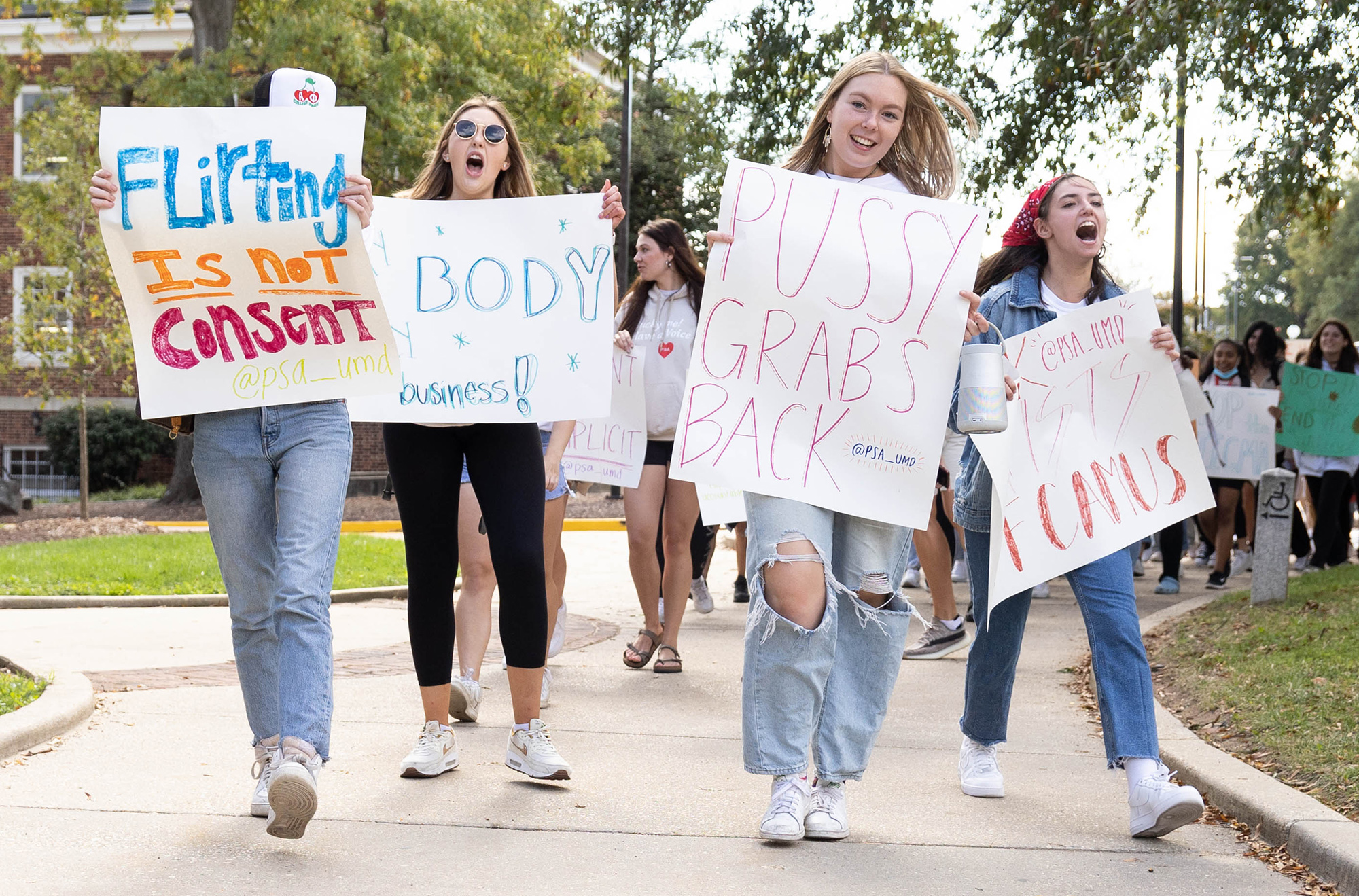 The Slut Walk makes its way from the Administration Building to Hornbake Plaza on Oct. 22, 2021. (Julia Nikhinson/The Diamondback)

Stories of sexual misconduct often travel through muted whispers and online gossip in a community. But Preventing Sexual Assault at the University of Maryland isn’t satisfied with that — it wants to bring these conversations, which are often about Greek life, to the table.

“More or less every [Greek life] chapter on this campus has something — and it’s all shoved under the rug,” PSA co-President Rachel Salem said. “And that’s something that we really, as an organization, try to prevent from continuing to happen.”

The senior management major joined PSA freshman year, around the same time co-President Hailey Chaikin joined. Together, Salem and Chaikin have been working with their team to support sexual assualt survivors, organize activist events and hold the university accountable.

In a Sept. 8, 2021, letter posted on PSA’s Instagram and addressed to the university’s Department of Fraternity and Sorority Life, Chaikin and Salem wrote about a “lack of accountability that Greek Life chapters have gotten away with time and time again in the context of sexual assault.” The letter was a response to accusations of sexual misconduct in this university’s Pi Kappa Alpha chapter.

The post went viral in the university community and as a result, Chaikin and Salem received unexpected responses — including threats of legal action against PSA, Chaikin said.

“We were able to navigate all of the unanticipated things that came into our direction, but it certainly was scary to have written something that was really vulnerable, and be met with getting grief and anger and retaliation,” Salem said.

Salem and Chaikin said the letter helped them gain more recognition in the university community and made the university administration take them more seriously but as far as concrete policy changes, Salem feels it’s lacking.

“As terms of what has happened since, I’m disappointed to say not a lot,” Salem said. “[The recognition is] really important … But at the same time, no next steps or action items or follow through. And that’s really upsetting to me, because what’s the point of having these conversations if we’re not going to do anything about it?”

“I think sentiments like the ones that President Pines disseminated last semester also speak to that and create a really dangerous narrative, honestly,” Salem said about this university’s President Darryll Pines’ previous comments to The Diamondback.  “Because when the president of the university doesn’t see an issue, it’s going to be difficult for other people to take things like swift action on a problem.”

In a statement to The Diamondback, Pines said, “Let there be no mistake about how I feel about sexual misconduct. I value every effort we make to create a campus that is free from sexual misconduct. We invest in this work, and we care deeply about prevention.”

Since PSA began in 2015 — after founder and alum McLaine Rich was assaulted her junior year and said then-President Wallace Loh refused to meet with her about campus resources—  it has grown to now holding over 15 leadership positions, providing support to countless survivors on this campus. This support comes in different forms, and it varies based on what a survivor needs.

“Obviously there are constraints in terms of how much we really can offer them support, but we also try and get what I would kind of coin ‘unofficial justice,’ either by offering if they’d like to speak at one of our events or even just attend,” Salem said.

PSA does events each semester, including Slut Walk in the fall semester and Occupy Mckeldin in the spring, which will be on April 22 this year. For sophomore criminology and criminal justice major Damiana Colley, her experience at Slut Walk was empowering.

“Even people who weren’t survivors or victims of sexual assault were there to support survivors and victims, and they were there to listen to stories, prevention and response tactics,” Colley said. “I think it did draw attention, mostly in a good way, which is kind of what the aim of that was.”

Colley held a sign during Slut Walk that read, “Don’t tell us how to dress, Tell men not to rape.” She said the posting of the sign on social media sparked backlash, but also kept the conversation going.

“I feel like exemplified the problem that we were trying to discuss,” Colley said. “I felt like that created almost positive discourse because, not only people at UMD but people on my Instagram page, were able to see the effect that this was having.”

PSA is working to provide fraternity chapters at this university guidelines on how to prevent and handle instances of sexual assault and misconduct. They also hope to implement education on consent and confidentiality, as well as incentives to attend sexual assualt prevention events and fundraisers.

In a statement to The Diamondback, the university said, “[DFSL] and the Office of Civil Rights and Sexual Misconduct recently met with fraternity and sorority leaders to discuss and identify ways to foster a culture of respect and one free of sexual misconduct. These conversations are collaborative, action-oriented and ongoing.”

Chaikin expressed that while there are limits to what they can do as activists, PSA has played an important role to the ongoing campus conversation on sexual assault on the campus.

“Overall, the university is very reactionary with this stuff,” Chaikin said. “And so we’re just trying to be as proactive as possible, because it seems like nobody else is.”