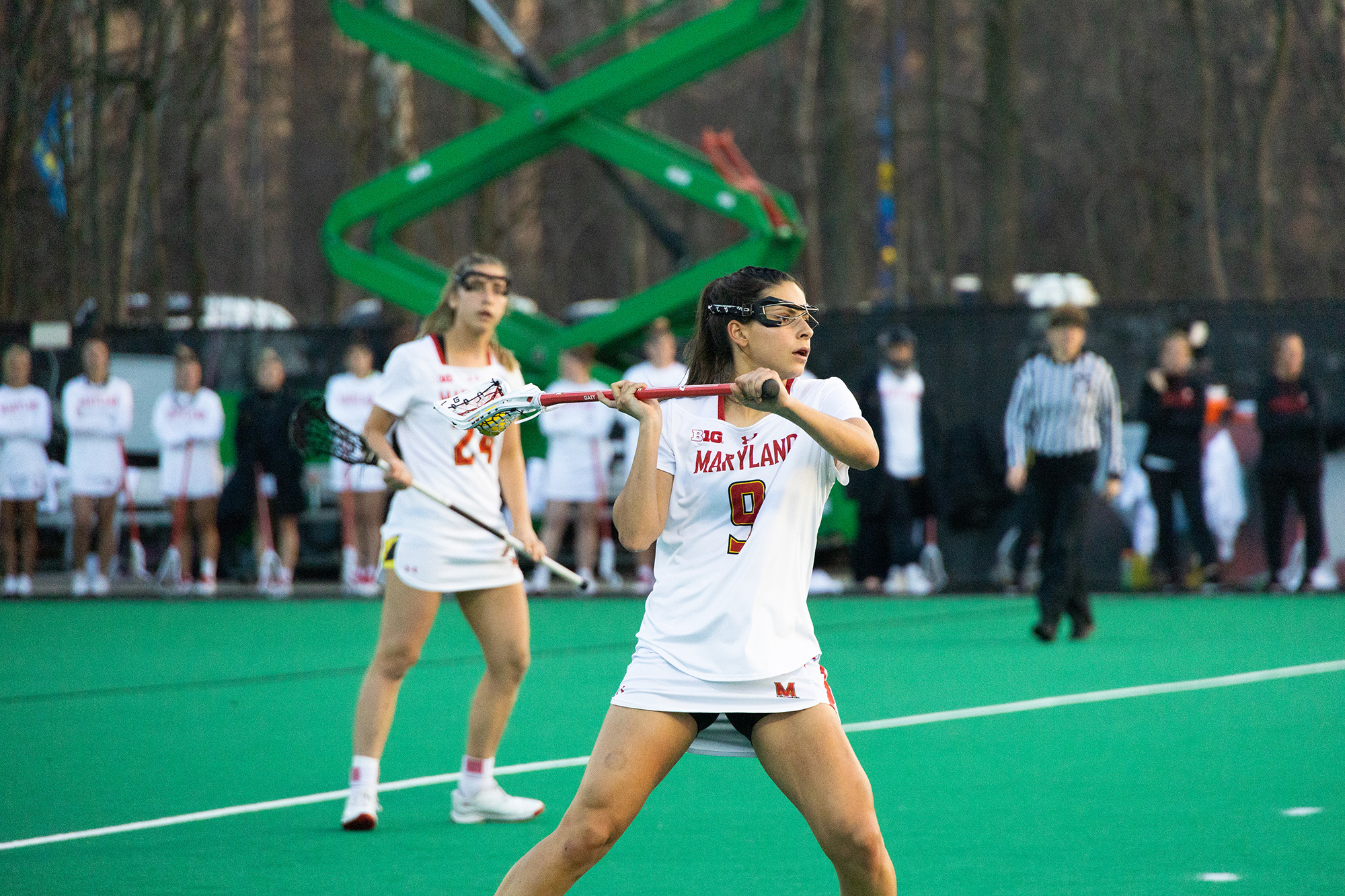 From behind the goal, Aurora Cordingley lobbed the ball to her teammate Shannon Smith who sat in wait at the front of the net. Smith leaped up to catch the ball and fired it down at the cage to complete her hat trick in the second quarter.

Smith was the first of four players to score three or more goals in Maryland women’s lacrosse’s powerful performance against William and Mary.

After two games at home, the Terps continued their winning streak on the road against the Tribe. The Terps advertised their deep offensive talent pool with eight different scorers and six players with assists.

“One of my favorite parts about where we are right now is, I think we’re generating a lot of assisted goals this season,” coach Cathy Reese said. “I think we need to do that to be successful.”

Maryland came out firing in its matchup against William and Mary. Libby May opened up scoring for the Terps, firing the ball into the net in the first minute of the game on an assist from Cordingley.

May’s goal was followed by two from Smith. But the Tribe fought back, scoring their first goal of the game more than halfway through the first quarter.

However, the Terps struck back quickly with a shot from attacker Hannah Leubecker. William and Mary scored another, continuing to put the pressure on Maryland.

Another free-position shot for the Terps led to their fifth goal of the game, this time from co-captain Grace Griffin to end the first quarter, 5-2.

“I think we just have a lot of depth on our offensive end,” Cordingley said. “I don’t really need to be the one scoring goals because I know that my teammates will be able to put the ball away.”

After the Tribe’s goalkeeper, Elise Palmer, clocked her sixth save of the game, May attacked with a rebound to slow down her opponent’s’ momentum.

Cordingley kept Maryland’s momentum going with an assist to Smith, giving the sophomore a hat trick. But when the Terps were a woman down, William and Mary attacked and fired in its fourth goal of the game.

Maryland didn’t let the goal go unanswered. Cordingley scored her first goal of the day after tallying up four assists. Leubecker followed with a goal of her own, giving her team a 10-4 lead.

Reese’s team finished the first half a woman-up, using the advantage to score another goal. Cordingley faked a high shot before whipping the ball in down low, for her 2oth goal of the season.

Terp goalkeeper Emily Sterling finished the half strong as well with eight saves, more than she’s had in any game so far this season.

“I feel like I’m really starting to like get a feel for that leadership position on defense,” Sterling said.

In the third quarter, Maryland was ready to dominate on both offense and defense. Eloise Clevenger chucked the ball into the cage to open second-half scoring. On defense, the team was aggressive in the midfield, working to keep William and Mary away from Sterling and the cage.

After Smith’s hat trick in the first half, Leubecker scored her third goal of the day by racing in from the side of the goal and launching the ball into the bottom of the net.

May followed with a hat trick of her own.

The Terps continued dominating on offense. Leubecker scored her fourth goal of the game and Cordingley joined the hat trick club. Another goal from May gave the team a 17-4 lead.

William and Mary was finally able to score in the final minutes of the third quarter, but Maryland still outscored them, 6-1, in the period.

After a quick break, the Terps came into the last quarter ready to go. Lipkin scored with a fake-out for her second goal of the day.

In the fourth quarter, Reese showed off the depth of her team with freshman goalkeeper Emily Lamparter coming in for Sterling.

Freshman Hailey Russo whipped the ball between the goalkeeper’s legs with an assist from Chrissy Thomas for Maryland’s final goal of the game.

William and Mary had one last run in them, scoring two goals in the waning minutes of the game, But the Terps had wrapped things up much earlier, finishing at a score of 19-7  in Williamsburg, Virginia.