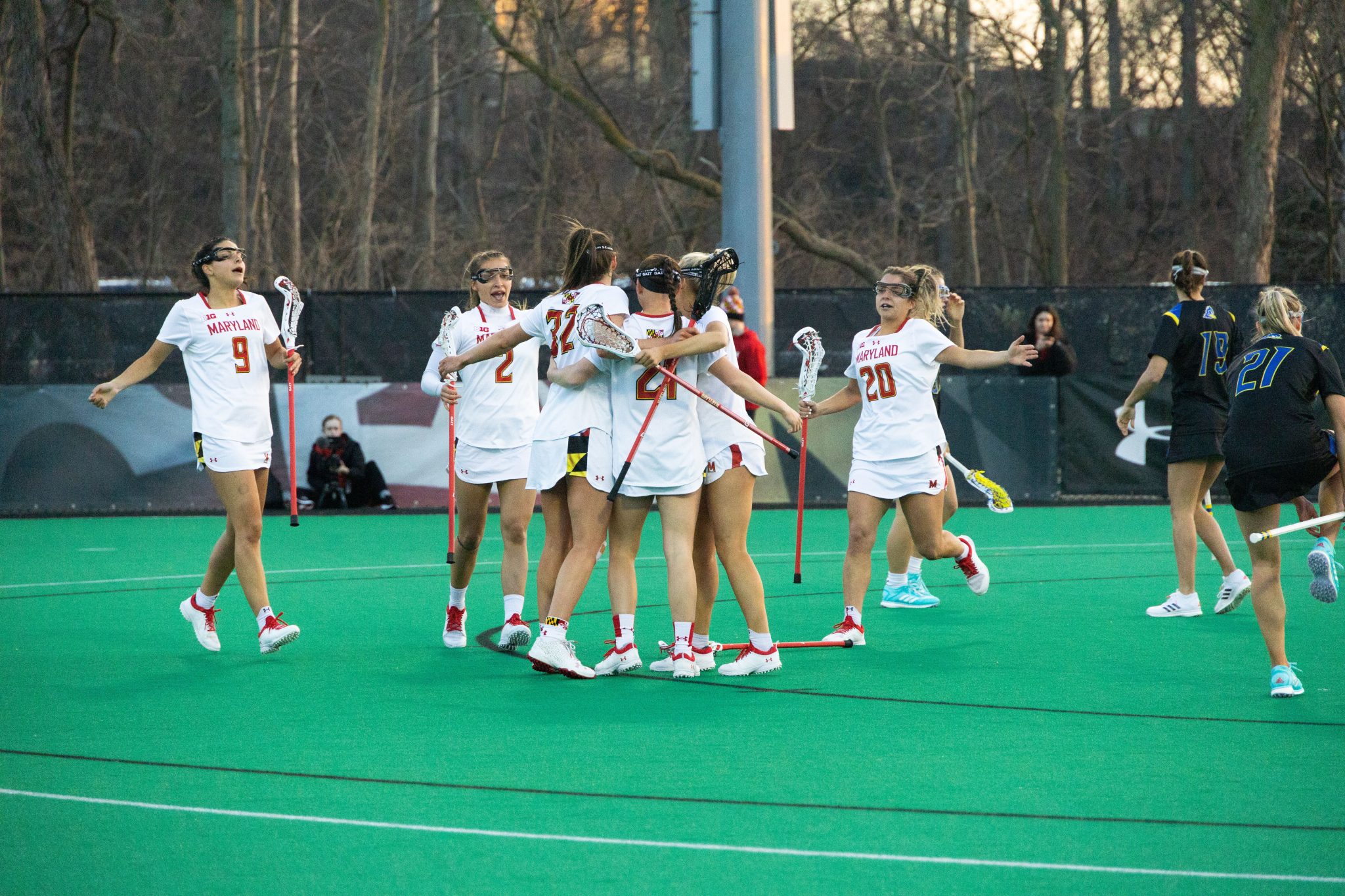 Maryland women's lacrosse celebrates a goal during its 15-2 win over Delaware on March 1, 2022. (Riley Sims/The Diamondback)

Aurora Cordingley darted in and out from behind the cage before chucking the ball into the bottom of the net. Her goal kicked off Maryland women’s lacrosse’s 10-0 first half against Delaware.

The current Inside Lacrosse Player of the Week had another standout performance against the Blue Hens. Cordingley netted five goals — a third of Maryland’s total — and assisted another. The Terps secured a dominant win over Delaware, 15-2.

Maryland had a quick turnaround after its victory against Florida — the Terps faced Delaware just three days later. Unlike previous games, Maryland used their defense to decimate its neighboring-state foe.

“Today we were able to just focus on our communication and do a better job of that,” defender Abby Bosco said. “Just all working together and communicating is something we’re really focusing on.”

An early yellow card gave Maryland the boost it needed to get on the board. Cordingley whipped the ball into the net with the woman-up advantage. Her shot was quickly followed by one from Shannon Smith with Delaware at full strength.

The Terps continued their pattern from previous games of starting off strong in the first quarter. Cordingley scored another two goals to bring coach Cathy Reese’s squad up, 4-0. Hannah Leubecker, Smith and Grace Griffin followed up with goals of their own.

“For us to come out with our foot on the gas is something we talked about, it’s important to us,” coach Cathy Reese said.

But Maryland wasn’t just powerful on scoring plays. The Terps prevented the Blue Hens from gaining possession by winning the draw control, 6-3, in the first quarter. On defense, the team kept Delaware attackers spread out, forcing them to make risky passes that turned into groundballs that the Terps recovered.

Victoria Hensh closed out another dominant first quarter for Maryland by firing the ball into the net with just 6 seconds left.

The Terps started the second quarter with Shaylan Ahearn winning the draw control. In spite of the two-minute break, Maryland kept its momentum going.

Despite continuing to shut down the Blue Hens, the Terps were slowed down in the second quarter. They only scored twice compared to the eight goals they netted in the first quarter. Delaware’s goalkeeper Mercy McCarthy made seven saves in the second period.

Despite the lower-scoring second half, Maryland stayed aggressive. Leubecker and Lipkin tallied another two goals for the team. Reese’s squad also picked up six groundballs in the quarter.

But the Terps couldn’t hold off the Blue Hens forever. Delaware midfielder Danika Swech put her team on the board with just over three minutes left in the third quarter.

Cordingley put Maryland back on track. The fifth-year attacker fired the ball above the goalkeeper’s head and down into the net for the fifth time against the Blue Hens.

Even with their 12 point lead going into the fourth quarter, the Terps never took their foot off the gas. They used their lead to their advantage, slowing down gameplay and tiring Delaware out on both ends of the field.

A free-position shot for Delaware made the score 14-2 with under six minutes left to play. But Maryland’s defense was unshakable — the Terps calm and kept the ball away from their goal for the rest of the game.

Reese’s team had one more opportunity to score, with a goal from attacker Kate Sites to close out Maryland’s commanding win against Delaware.

“Just even in the first four games, we’ve done a lot of really good things and I think there’s a lot more we can improve on,” Clevenger said.