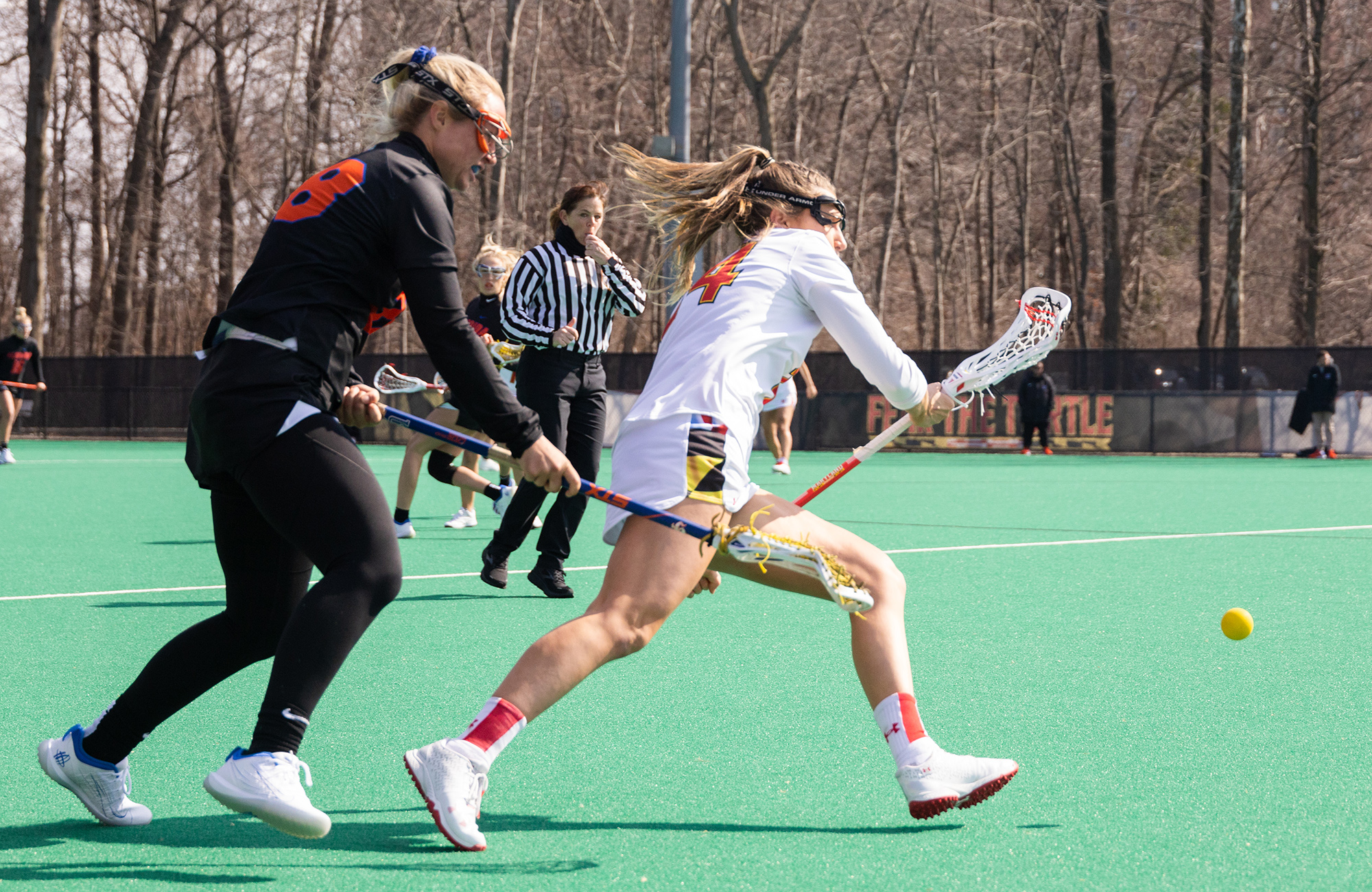 With under 30 seconds left in the first half, Shaylan Ahearn was in the draw control circle, ready to get the ball back for Maryland women’s lacrosse. The draw specialist knocked the ball out of the circle before her counterpart from Florida in the circle could react.

From there, Ahearn’s teammates took control on offense, nabbing the loose ball and scoring the final goal of the half that gave the Terps the momentum they needed going into halftime.

In their home-opener, Maryland trounced the Gators, winning their second top-1o battle of the season. But after their record-breaking victory on Saturday, the team has a new challenge to contend with: quick turnover between games.

No. 4 Maryland will host Delaware just three days after their previous victory against Florida — a redemptive game where multiple players had a career-high day.

Ahearn was dominant in the draw control circle.

The junior midfielder won a career-high 14 draw controls, helping Maryland’s offense monopolize scoring opportunities. The team has won 65 of 92 battles in the draw control circle this season, with Ahearn contributing nearly half of those wins at 30 draw controls.

“She crushed it and just to see what she’s done in three games so far as technically a sophomore eligibility wise … that gets us really kind of excited about what we’re working with and where we’re headed this year,” coach Cathy Reese said.

But Ahearn wasn’t the only player to hit a career-best against Florida.

“I honestly had no idea, I was just so focused on the game,” Cordingley said. “It was definitely a really cool feeling.”

Cordingley also scored a career-best 10 points in one game with four goals and six assists against the Gators, hitting the most points captured in a game by a Terp since 2013 and the sixth most in program history.

“To have someone come in and have the field vision that she has and the ability to find open players, that’s something special,” Reese said.

The attacker was consistent in her goal-scoring, after knocking in 5 goals in her first game and four in her second. But she reached new heights for assisting her teammates, after only racking up two coming into the matchup.

Fitting with Reese’s coaching philosophy, Maryland wasn’t focused on preparing for Delaware until after the Saturday victory was over, which left the Terps with only Monday to prepare for their middle-of-the-week matchup.

Maryland hopes to continue its at-home dominance on Tuesday; the Terps have a 152-4 record in College Park since Reese became coach in 2007. Ahearn attributes their home success to the “energy” of the fans and the atmosphere.

“Our stands are small, but they’re packed,” she said. “It just makes you, when you’re on the field, feel like you’re in the most intense game in the whole entire world.”

But Reese doesn’t want her team to be focused on winning the game or what the score is. She wants them to stay in the moment and concentrate on coming out on top in individual plays.

“Our focus is just strictly on winning the next play,” Reese said. “When we can shift our minds to really focus and dive deep on that, we would come up with that next draw control, we were disciplined on offense.”