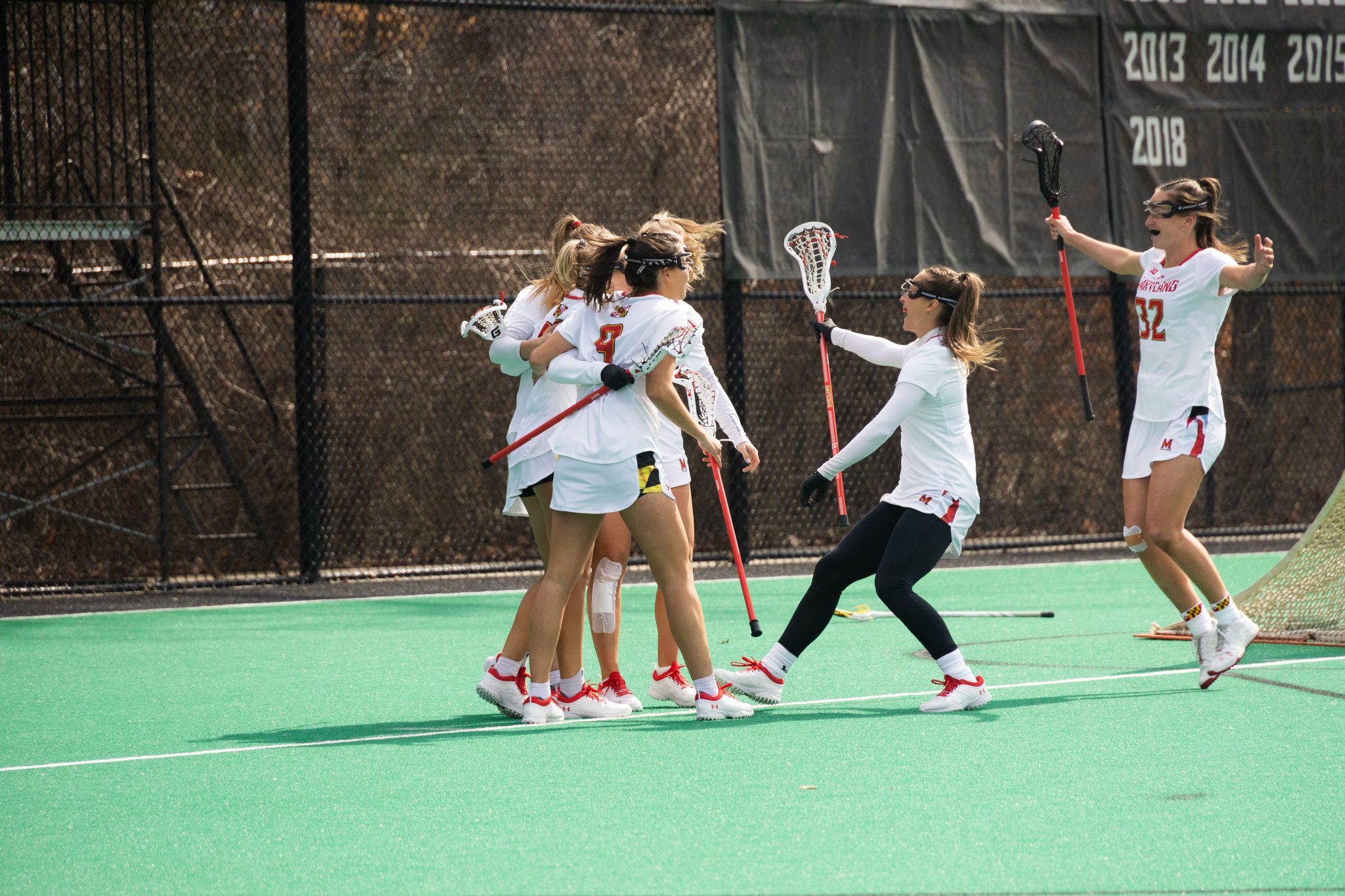 Maryland women's lacrosse celebrates a goal during it's 18-8 win over Florida on Feb. 26, 2022. (Riley Sims/The Diamondback)

In the middle of the first quarter, No. 5 Maryland women’s lacrosse was tied with No. 7 Florida when it had an opportunity to score with a free-position shot.

Attacker Aurora Cordingley charged the goal and whipped the ball into the net, giving the Terps a lead that they held onto for the rest of their dominant performance against the Gators.

Maryland had a decisive win in its second top-10 battle of the season. Coach Cathy Reese’s squad beat the Gators, 18-8, by outshooting them on goal 32-15.

Grace Griffin scored the first goal of the game with a deep throw that found its way to the back of the net.

Florida tied the game with a free-position goal before Maryland responded with one of its own from Big Ten Co-Offensive Player of the Week Cordingley.

The Terps kept the momentum going with a goal from attacker Hannah Leubecker and a second goal from Cordingley.

With another free-position shot, midfielder Shannon Smith made the score 5-1 for Maryland.

Despite Florida’s strong defense, Maryland controlled the game, winning 8-1 in the draw control circle in the opening 15 minutes. The Terps gave the Gators little opportunity to go on the offense, working their defense nearly the entire quarter.

Maryland scored twice more. Cordingley scored her third of the day and assisted Eloise Clevenger in another.

“There’s seven people in the offensive end and every single one is a threat,” Cordingley said.

The scoring slowed down in the second quarter — Florida’s defense fought back against Maryland’s aggressive offensive tactics. The Gators scored their second goal of the game after a nearly 15-minute scoring drought.

Just over two minutes later, Florida midfielder Danielle Pavinelli lobbed in her second goal of the day. After letting the Terps dominate throughout the first quarter, the Gators kept Maryland running during the second, limiting its scoring opportunities.

Cordingley put the Terps back on the board during a free-position shot for her fourth goal of the game.

But Florida wasn’t ready to give up control. After defenders Maddie Sanchez and Torie Barretta received yellow cards, the Gators scored with their two-woman advantage and then again one woman up to encroach on Maryland’s lead, 8-6.

But Maryland got the last laugh of the first half. Cordingly assisted Clevenger who chucked the ball into the net — that assist was Cordingley’s 200th career point.

“Second quarter was tough for us,” Reese said. “But once we were able to have that discipline to execute on that we could kind off each other’s momentum.”

After floundering in the second quarter, Maryland came back firing in the second half. Smith scored Maryland’s tenth goal of the game while the team was a woman up. Her goal was quickly followed by another from Libby May, who was assisted by Cordingley. The Terps led, 11-6.

The Terps continued their dominance in the draw control circle, winning all five chances in the third quarter. Shaylan Ahearn won a career-high 14 draw controls.

“I trust my defense completely, but why not make it a little bit easier for them,” Ahearn said. “When you win that many draw controls, it just gives you time to kind of control the tempo of the game.”

Maryland controlled the ball and made the most of its opportunities on offense. The Terps had 10 shots on goal in the third quarter compared to the Gators’ two.

Maryland scored two more goals in the third quarter. Leubecker fired one in while her team was a woman up. Then Smith closed out the quarter with a free-position goal, ending the quarter at 13-6.

The Terps kept their momentum going into the fourth quarter. May whipped the ball in under a minute in to start her team off strong. After some back-and-forth, Griffin passed the ball to Leubecker who fired it in. Less than a minute later, Griffin scored a goal of her own to give Reese’s squad a 10-point advantage, 16-6.

Maryland didn’t give Florida another chance to make a comeback. They continued to win in the draw control circle and kept Florida playing defense.

Leubecker made another free-position shot before Florida finally had a chance to respond to the team’s 9-0 run, by scoring two goals of their own.

Maryland had the final word, proving their dominance on offense with a goal from Julia Hoffman, its seventh scorer of the day.